Nine passengers were forced to huddle together in a toilet cubicle on the 17.47 train between Cambridge and Ipswich. 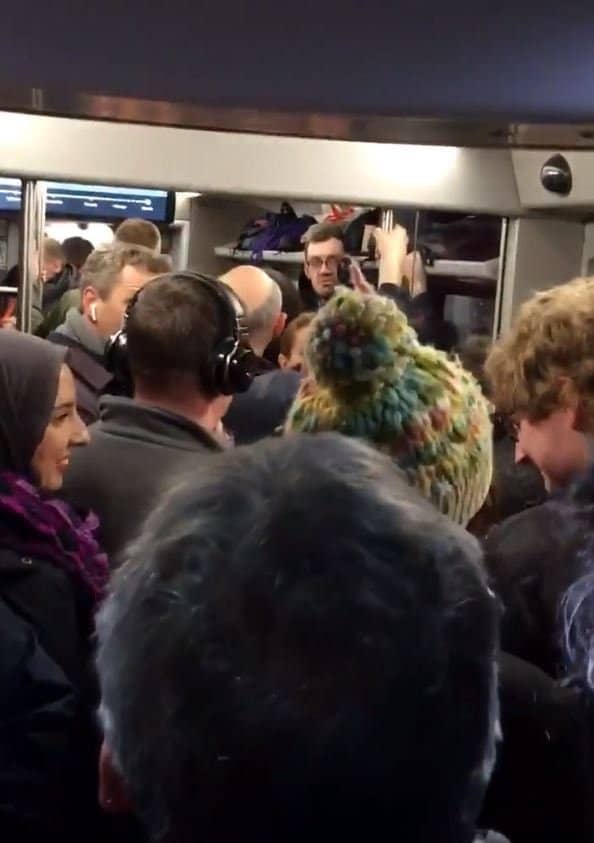 Footage has emerged showing the “horrible” overcrowding on a commuter train – as nine passengers were forced to huddle together in a toilet cubicle.

The video, filmed on the 17.47 Greater Anglia service between Cambridge and Ipswich yesterday, shows two trains’ worth of people crammed into one – after the previous train was cancelled.

Eighteen-year-old Oscar Hedge said he was one of eight people squeezed into one of the train’s tiny toilet cubicles for the duration of his 40-minute journey.

Oscar, a Sixth Form student at a college in Cambridge, said: “It was horrible. I thought I wasn’t going to get onto the train, because people were really struggling.

“Me and eight other people had to stand in the toilet for the whole of my journey from Cambridge to Bury St Edmunds.

“Usually my journey takes about 40 minutes, but yesterday it took over an hour, as the train stopped for ages to let another train go past.”

Footage shows 9 passengers forced to huddle together in a toilet cubicle on overcrowded #GreaterAnglia train: pic.twitter.com/EmaJFFz80q

Oscar added that the Greater Anglia service, which runs hourly, was crammed, as the previous train at 16.47 had been cancelled.

He said: “I’d been waiting for the one before, and it was cancelled about ten minutes before it was due to arrive.

“When the 5.47 train came along, there was announcements on the platform saying that anyone who couldn’t get on to the train should go to the help desk.

Oscar added: “Greater Anglia has a real reputation for overcrowded trains. They’ve recently added new trains on to that line, but this sort of thing used to happen every day.”

Oscar said that, since the previous train had been cancelled, he is entitled to Delay Repay online – but he added: “It really doesn’t make up for having to stand in the toilet.”

On Tuesday she said would press for a meeting with the both the train operator and the Transport Secretary to raise her concerns.

She said: “The recent disruption on both Greater Anglia’s mainline and branch services has not been good enough, passengers expect and deserve a reliable service.

“It is concerning that many of the delays and cancellations are being caused by faults with the new trains, and I will be seeking answers to why these faults are occurring and how Greater Anglia plan to fix these issues.”

Related: Vegan protesting outside shop that sells fur says he was headbutted