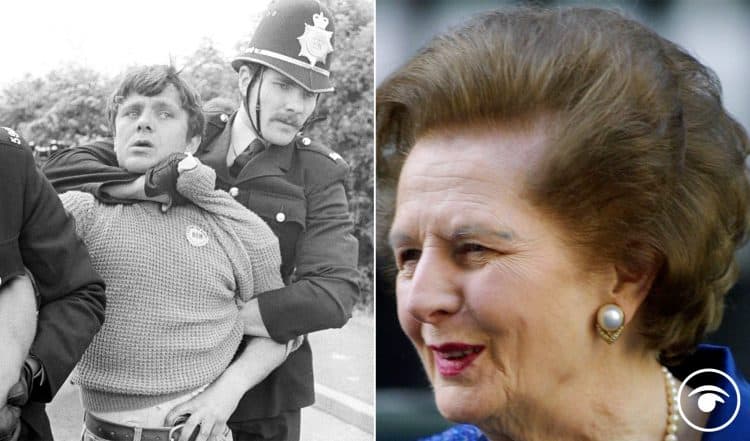 There was anger as the PM said that ex-PM Margaret Thatcher gave the UK a “big early start” in its battle against climate change when she closed coal mines in the 1980s.

It comes as he insisted Cambo oil and gas field contracts cannot be torn up, which environmental groups have said are totally against the government’s supposed green strategy.

He made the comment during a visit to Scotland.

“Look at what we’ve done already. We’ve transitioned away from coal in my lifetime,” he said.

“Thanks to Margaret Thatcher, who closed so many coal mines across the country, we had a big early start and we’re now moving rapidly away from coal altogether.”

According to the Daily Record, the prime minister laughed when he made the reference to Mrs Thatcher, whose time in Downing Street featured the miners’ strike of 1984-5.

His comments come as Boris Johnson has insisted that “we can’t just tear up contracts” as campaigners urged him to block the drilling of oil and gas from the seabed near Shetland.

Yet again, @BorisJohnson has shown he is completely out of touch with Scotland by making unbelievably crass jokes at the expense of our mining communities.https://t.co/Np2ROnFkvx

Boris Johnson’s shameful praising of Margaret Thatcher’s closure of the coal mines, brushing off the devastating impact on those communities with a laugh, shows just how out of touch he is with working people.https://t.co/Lga1FYHfqC

Lives & communities in Scotland were utterly devastated by Thatcher’s destruction of the coal industry (which had zero to do with any concern she had for the planet). To treat that as something to laugh about is crass & deeply insensitive to that reality. https://t.co/QY0Y59UO3K

Johnson just praised Thatcher for giving them a head start on the climate crisis by closing so many coal mines.

Boris Johnson laughs at the Thatcher govts destruction of the coal industry and it's communities, to think the red wall former mining constituencies voted for him, he's not your mate, we told you again and again, Johnson hates you, he always has, he always will..

This will go down badly for Johnson and the Cons in red wall seats. Even Tebbit apologised for abandoning mining communities https://t.co/SleNdvzQxq

There were a number of reasons Margaret Thatcher closed down the UK coal mines but not a single one of them in any way, shape or form @BorisJohnson was because of the mines environmental impact. She imported coal from Australia, USA, Colombia instead..some environmentalist

Its cruel and vindictive policies left communities and workers across Scotland high and dry.https://t.co/KXgvxNdguP

The closure of the coal mines had a devastating impact on communities with nothing put in place to replace people’s jobs and livelihoods. That the Prime Minister was laughing at this is appalling and shows his lack of care and understanding.https://t.co/m49jnaeVap