The proposals have provoked controversy on social media. 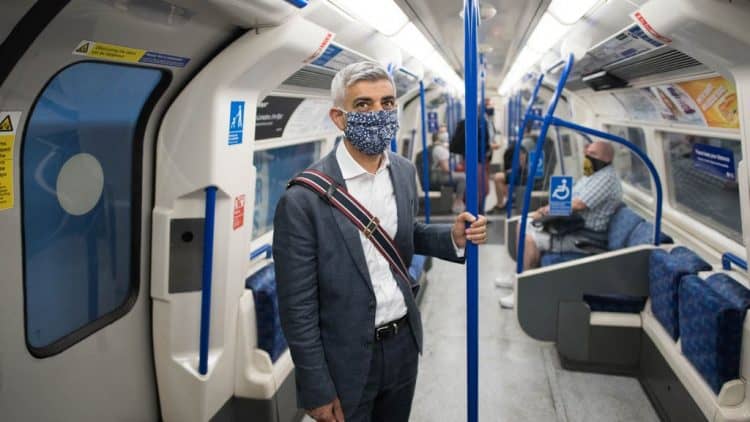 Sadiq Khan has urged the government to allow Transport for London to introduce a new by-law requiring face coverings to be worn on the city’s public transport network.

Insisting that wearing a face mask on the tube should be a criminal offence, the Mayor of London has said this would reduce the risk of spreading Covid-19 as cases continue to rise.

He also hopes the by-law would increase commuters’ confidence when returning to work, as well as visitors to the West End, which could ultimately aid the economy.

With lockdown rules eased on Monday 19th July, the requirement to wear a face covering on public transport has been a “condition of carriage” rather than a legal requirement.

As a result, TFL’s 400 enforcement officers can ask passengers to leave the mode of transport or prevent them from boarding, but they’re completely powerless when it comes to imposing fines.

Sadiq’s proposed by-law would return the rules to the tougher position, with the Met and British Transport Police able to intervene and impose fines or prevent people from travelling without a face mask unless genuinely exempt.

The Mayor’s suggestion hasn’t been without criticism, with many people taking to Twitter to voice their discontentment.

In response to the proposal, GB News host Patrick Christys tweeted: “Taking a stronger stance on mask wearing than he does on knife crime. Cheers @SadiqKhan”.

Dawn Neesom added: “Sadiq Khan should be a criminal offence.”

Kevin Edger wrote: “Sadiq Khan being the Mayor of London, when he’s so incompetent at his job, should be a criminal offence in my opinion.”

Other users took to social media to share their criticisms.

Another Twitter user wrote: “What a shame he didn’t have the same attitude towards stabbings in London.”

Others used the opportunity to discuss violent crimes in London, rather than the matter at hand.

“Amazing how Sadiq Khan seems to be so concerned about masks on the tube, but seems to be doing absolutely nothing about the rising crime in London. What a terrible Mayor he is.”

“Stabbing people to death or machete fights in broad daylight is against the law. Maybe you should try enforcing these laws before you enforce any more new ones?”

Speaking on the BBC Newscast podcast, Sadiq Khan said: “We are trying to lobby the Government to allow us to bring in a bye-law, so it will be the law again, so we can issue fixed penalty notices and we can use the police service and BTP to enforce this.

“Public transport is safe. What gives people even more confidence is if they know people are wearing face masks.

“I’m hoping the Government understands, on the issue of public safety and public confidence, we want to be able to use the law to make sure people do wear face masks in spaces where you can’t keep your social distance for obvious reasons.”