There is particular concern about the extension of stop and search powers, allowing police to carry out searches where there are no reasonable grounds for suspicion, previously such measures had only been used in response to serious violence and terrorism. 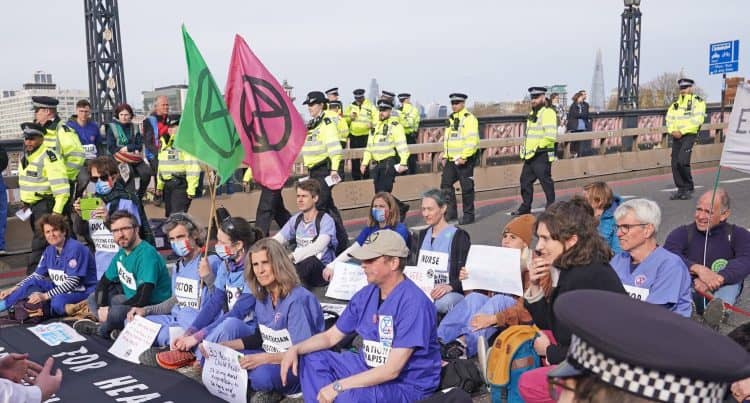 Ministers have been accused by MPs and peers of creating a “hostile environment” for peaceful protest following the Government’s latest attempt to crack down on disruptive demonstrations.

The Joint Committee on Human Rights said new policing powers in the draft Public Order Bill would have a “chilling effect” on people in England and Wales seeking to exercise their legitimate democratic rights.

It called for key measures in the legislation to be watered down or scrapped altogether, warning they threaten fundamental freedoms guaranteed in the European Convention on Human Rights.

The bill was drawn up in response to what ministers say is the unacceptable disruption caused by groups such as Extinction Rebellion and Insulate Britain.

However, the committee said they go too far and “risk creating a hostile environment for peaceful protesters”.

They include a new offence of “locking on” for protesters who attach themselves to something so they cannot be removed, with a maximum sentence of up to 51 weeks in prison.

However, the committee said that it could encompass demonstrators who simply link arms with each other and should be amended.

It said measures relating to the obstruction of major transport works covered actions that were not intended to cause significant disruption, while those on interference with key national infrastructure covered infrastructure that was neither key nor national.

The proposed serious disruption prevention orders could prevent people being able to exercise their rights to protest, the committee said, and represented a “disproportionate response” to the disruption which may result.

It expressed particular concern about the extension of stop and search powers, allowing police to carry out searches where there are no reasonable grounds for suspicion, saying previously such measures had only been used in response to serious violence and terrorism.

“This latest raft of measures is likely to have a chilling effect on the right to protest in England and Wales,” the committee said.

“While the stated intention behind the Bill is to strengthen police powers to tackle dangerous and highly disruptive protest tactics, its measures go beyond this, to the extent that we believe they pose an unacceptable threat to the fundamental right to engage in peaceful protest.”

The latest measures follow on from the Police, Crime, Sentencing and Courts Act 2022, which the committee had previously criticised for threatening the right to protest.

Acting committee chair Joanna Cherry said: “The right to peaceful protest is a cornerstone of a healthy democracy, it should be protected. The law must strike a careful balance between the right to protest and the prevention of disruption to the wider population.

“This requires a nuanced approach, yet in reaction to what it perceives as overly disruptive protests the Government has decided to take a blunderbuss to the problem.”