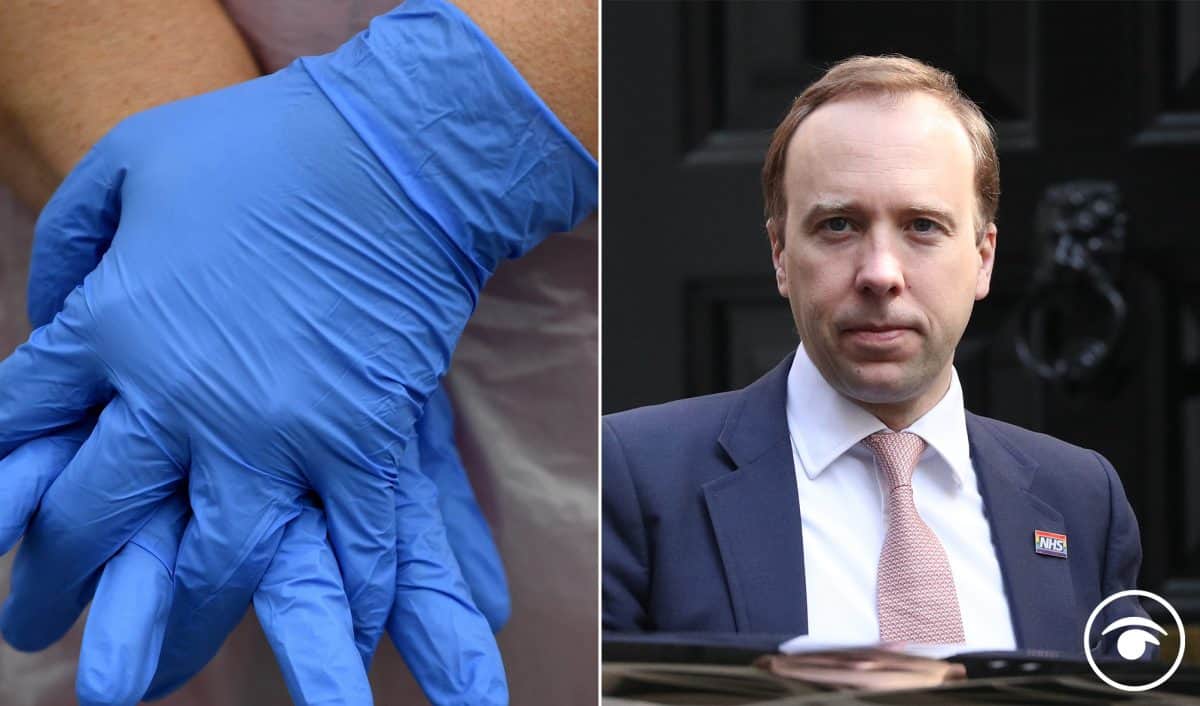 The Health Secretary has faced criticism after saying that there was “never” a national shortage of personal protective equipment (PPE).

Matt Hancock said it was difficult to deliver PPE “in the teeth of a pandemic”, when addressing a High Court ruling over failings in publishing details of coronavirus-related contracts.

But he said that thanks to his team, there was “never a national shortage”.

Labour said it was an “insult” to claim there was no shortage of the equipment medics need to help prevent them from being infected with the virus.

And medics criticised the minister online.

One doctor wrote on Twitter that Mr Hancock’s remarks are “categorically not true”.

Dr Rachel Clarke, a palliative care doctor, wrote: “I say this as someone who begged local veterinary practices and schools for masks and visors.

“Whose hospice nearly closed down through lack of PPE. This was happening up and down the country. It was horrendous.”

Jonathan Ashworth Tweeted: “Our nurses and NHS staff were forced to use bin bags for PPE. And Matt Hancock squandered millions of pounds on crony contracts for duff PPE. He should apologise and recover every penny piece.”

Angela Rayner Tweeted: “f there was no PPE shortage as you (wrongly) claim, @MattHancock, then why were you handing £14 million over to your family friend – a racecourse director – to supply PPE when their company didn’t even have a website and the PPE wasn’t delievered?”

Richard Burgon Tweeted: “Instead of resigning, Matt Hancock is busy touring TV studios explaining why there was no national shortage of PPE despite the disgraceful footage of nurses wearing bin bags. Unbelievable.”

The Health Secretary told BBC Radio 4’s Today programme: “This has all been looked into in great detail. It’s only because of the transparency that I support that we can ask questions about these contracts.

“The implication of your question about the specific one that you raised is that people should be barred from taking contracts if they know anybody involved – that would be ridiculous.

“And what’s more, it’s easy to ask these questions, but what is hard is to deliver PPE in the teeth of a pandemic.

“And that’s what my team did. And yes, there were individual challenges in access to PPE, but we never had a national shortage, because of my team.”

It comes as the Department of Health and Social Care (DHSC) was forced to issue a notice to the NHS regarding some masks it had issued.

The alert said that some medical grade masks “may not meet DHSC’s essential technical specification” and urged NHS leaders to “stop using this product for the time being, and immediately quarantine any stock of this product you may have”.

Labour said that it was “another example of ministers buying duff PPE that is inadequate for protecting our hardworking NHS staff”.

She said: “It is an insult to claim there was no shortage of PPE.

“Many frontline workers had to ration protective equipment, putting themselves at risk.

“Lots of it was inadequate and poorly fitting, and some NHS staff had to make gowns themselves from bin bags.

“The fact is, it was a smash-and-grab for Tory donors and friends. And protecting workers who were putting themselves in harm’s way to look after people seems to have been an afterthought.”

Gavin Edwards, senior national officer for the union Unison, said: “Workers across the UK, particularly those in the care sector, were left distressed and in danger because of the lack of protective kit in the early days of the pandemic.

“Pretending this didn’t happen or that somehow it was not a national problem is rewriting history and ignoring the facts.”

Dame Donna Kinnair, chief executive and general secretary of the Royal College of Nursing, said: “Nursing staff who were put in harm’s way because they could not access proper protective equipment will find this claim deeply insulting.

“Reports from the National Audit Office, PAC and HSC Committee also directly contradict what the Health Secretary is claiming. ”

The PA news agency spoke to numerous doctors as the coronavirus crisis unfolded last year about their experience with PPE.

– An obstetrician at a London hospital who described how staff were “hiding” PPE out of sheer desperation.

– An orderly at the same hospital made themselves a makeshift face covering out of an eye mask usually used for sleeping.

– Another doctor compared the situation to sending a soldier to war without the necessary equipment.

– A junior doctor who said it felt like it was “inevitable” that they would contract the virus due to a lack of PPE.

– One GP told PA they had purchased face shields from the online retailer Amazon as they could not get them through the traditional supply chains.

In March last year, the Royal College of Nursing said that some nurses were sent to treat patients on Covid wards with “no protection at all”.

One desperate NHS procurement chief tweeted: “God help us all”.

And the Health Care Supply Association (HCSA), which represents procurement and supply professionals within the healthcare sector in the UK, warned of “serious supply issues” in hospitals.

The World Health Organisation also warned that the “chronic” shortage of PPE was threatening “our collective ability to save lives”.

Related: ‘Here’s what you could have won’: Corbyn calls for Hancock’s resignation and end to privatisation of NHS