“We will never allow you to tell us what to say and do," Angel Dzhambazki said as he exited the chambers. 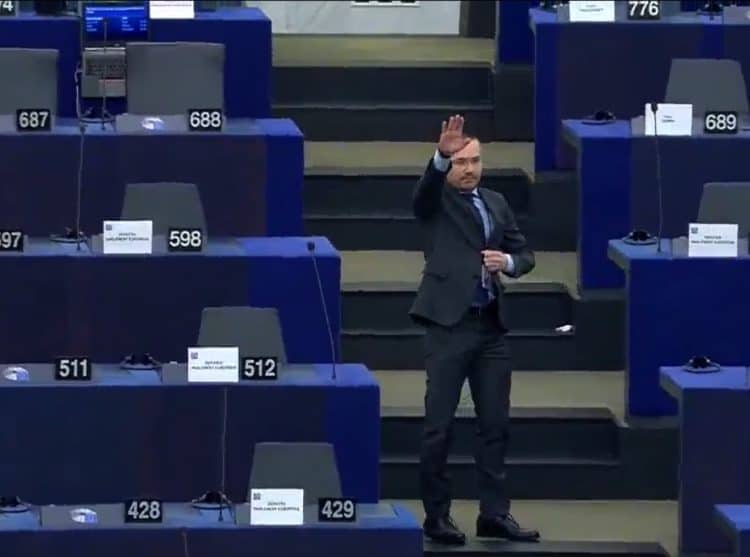 A Bulgarian MEP who sits in an EU political group founded by Britain’s Conservative Party has sparked outrage after giving a Nazi salute in the European Parliament.

Angel Dzhambazki, who is part of the right-wing Bulgarian National Movement party, sits in the wider European Conservatives and Reformists.

The ECR was founded by the UK’s Conservatives and includes a range of right-wing, eurosceptic and far-right parties, the Independent has reported.

When Britain was part of the EU, David Cameron took the UK Tories out of the European People’s Party in 2009, to set up the ECR.

Although the UK no longer has representatives in the European Parliament after Brexit, the British Tories’ legacy of the European party they created remained.

The Bulgarian politician, who would have been the British Tories’ colleague, made the Nazi gesture after speaking during a debate in the European Parliament.

The talks came after the European Commission and Parliament moved to sanction Hungary and Poland, resulting in a court decision involving cutting billions of euros of funds.

The decision made by the European Court of Justice, which cannot be appealed, follows a bloc condemnation of democratic rights violation, according to Reuters.

“We will never allow you to tell us what to say and do. Long live Bulgaria, Hungary, Orbán, Fidesz and the Europe of nation states,” Dzhambazki told the European Parliament after the debate.

“It offends me and everyone else in Europe. We stand for the opposite. We are the House of democracy. That gesture is from the darkest chapter of our history and must be left there.”

Manfred Weber, a German politician who also sits in the EPP, also reacted to the gesture.

“On behalf of the EPP, we condemn this in the harshest possible terms,” Weber said, adding: “It is the opposite of what the European Parliament stands for and we call for immediate sanctioning”.

But Dzhambazki said Weber “of all people” should be “wary with the accusations”.

“It is very easy for something to be misrepresented when lacking context,” Dzhambazki said.

He added: “Disagreeing with someone does not mean they are a Nazi. I request a formal apology.”

‘EU represents victory of Europeans against the barbarism of Nazi fascism’

Dzhambazki also hit out at the European socialist group S&D, whose member, Pina Picierno, also vice president of the European Parliament, spoke out against the gesture.

“Fascist symbols are unacceptable in this House because this is the home of EU citizens, but it’s also a living monument that represents the victory of Europeans against the barbarism of Nazi fascism,” Picierno said.

But Dzhambazki said Picierno took the gesture “out of context, blew it out of proportion and went on a witch hunt”.

“Everyone else took the bait. But be careful because you might be accused the same. If you have a grain of honour you would apologise for the campaign against me,” he added.