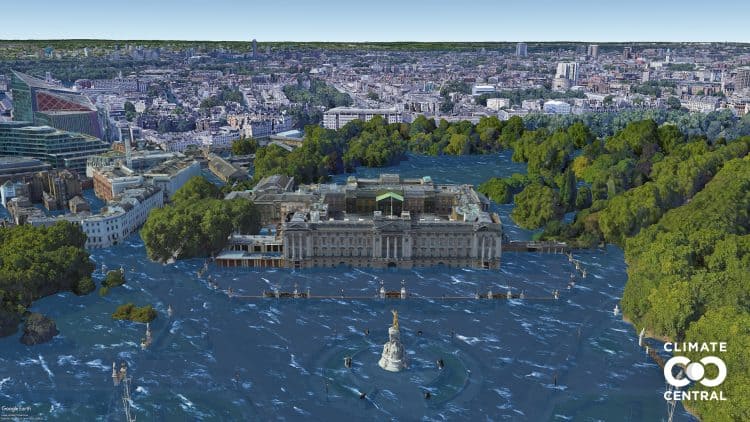 Buckingham Palace is one of the world’s sites which is set to be surrounded by water because of global heating.

Images show what places like the Tower of London, Seville’s Plaza de España and Dubai’s Burj Khalifa would look like if we keep our carbon emissions as they currently are, leading to a 3C global warming.

Dozens of citizens and one billion people at risk

A 1.5C global heating is possible instead, if “deep and immediate” cuts are made to our carbon footprint, dropping to half of our current yearly emissions by 2030.

Researchers said hundreds of coastal cities and land are at risk, where up to one billion people live.

About 50 main cities would have to put in place “unprecedented defences” to not lose their land because of sea level rises, and many small island countries are thought to become completely engulfed by water.

The findings come as world leaders are set to meet from 31 October for COP26, a climate change summit held at Glasgow, where they have the opportunity to decide on measures they need to take to reduce the impact of climate change on the future of humanity.

Carney said: “About three quarters of emissions result from the production and consumption of energy in various sectors.

Sectors which leaders should focus on

He said: “Half of this amount is needed to transform the power sector and a third to electrify road transport. But significant investment is also required in buildings, aviation, steel, cement, shipping and agriculture. And the majority of this investment needs to happen soon in order to ensure a smooth transition.

“Reducing emissions at this pace and scale demands a whole economy transition backed by a plan and funded by mainstream climate finance. 126 countries have committed to net zero and more could join in short order.”