Schools and colleges have been told not to issue BTEC results to students on Thursday following a last-minute U-turn on grading. 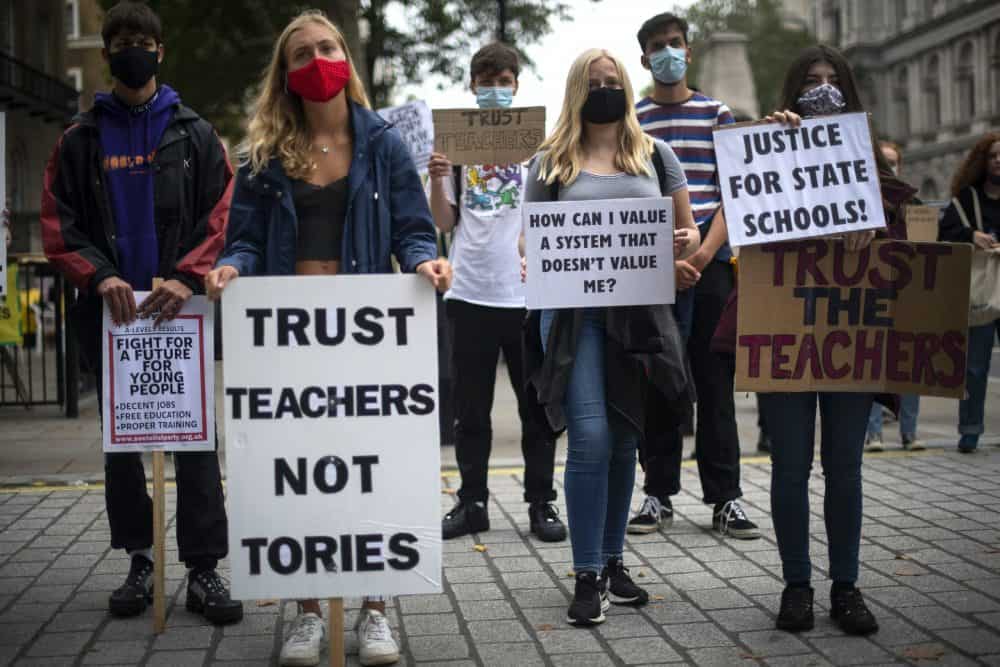 On Wednesday – with less than 24 hours to go until results day – exam board Pearson asked schools and colleges not to publish BTEC level 1 and 2 results in the vocational qualifications to give them more time to recalculate the grades.

It follows the announcement that GCSE and A-level students would this year be able to receive grades based on their teachers’ estimates.

BTEC students’ grades were not included in the original announcement, but now Pearson has said it will be regrading BTECs awarded last week – as well the grades that were due to be released tomorrow.

To add to the chaos and confusion Minister of State for School Standards Nick Gibb went on BBC News this morning and denied that the algorithm used to deicide grades did disadvantage pupils from less well off backgrounds, which will surprise many.

It comes after education unions and the Labour Party called on the Government to provide clarity on why BTEC students had been left out of Monday’s grading U-turn.

A spokeswoman for Pearson, the provider of BTECs, said: “Following Ofqual’s announcement that A-level and GCSE students are to receive centre-assessed grades, we will be applying the same principles for students receiving BTEC results this summer.

“We will be regrading BTECs to address concerns about unfairness in relation to A-levels and GCSEs and ensure no BTEC student is disadvantaged.”

She added: “We know this could cause additional uncertainty for students and we are sorry about this.

“Our priority is to ensure fair outcomes for BTEC students and we will work around the clock to provide revised grades as soon as we can.”

A Department for Education (DfE) spokesperson said: “We know this delay to BTEC results will be disappointing for students and understand their frustration.

“The awarding organisations have decided to take more time in order to make absolutely certain no student is inadvertently worse off due to changes in how grades are assessed.

“Critically, no student will see their result downgraded as a result of this review, so results already issued will either stay the same or improve.

“The relevant awarding organisations have assured us that students will receive their results as soon as possible.

On Tuesday, exams regulator Ofqual said its moderation algorithm used in A-levels and GCSEs was not used in the majority of vocational and technical qualifications (VTQ) – including BTECs.

But in a statement on Wednesday night – just hours before results were due to be published – England’s exams watchdog said some exam boards, including OCR and Pearson, will “need more time” to recalculate results.

It said: “OCR have said that their Cambridge National results will issue next week.

“Pearson, which initially did not think there would need to be significant changes made, has now decided to revise its arrangements to ensure that students’ qualification-level results better reflect the unit-level results that students have already secured through internally assessed units.”

Ofqual added: “Everyone is working as quickly as possible to confirm results as soon as possible, recognising the impact that delays are having on schools, colleges and students.

“No learner’s result will go down as a consequence of regrading.”

David Hughes, chief executive of the Association of Colleges (AoC), said: “The timing is worrying, because thousands of students were due to get their results in the morning and others have already got results which we know will not go down, but which might improve.

“So it is vital for students that this is sorted in days rather than weeks so that students have the chance to celebrate and to plan their next steps. It is a stressful time and this delay will extend the uncertainties.”

He added: “Those students wanting to move onto further or higher education will be most worried about losing out on places.

“We are in close communication with DfE, Ofqual and Pearson to particularly make sure that BTEC students applying for universities can still be treated fairly.”

Liberal Democrat education spokesperson Layla Moran said: “It seems the Conservatives, bumbling from one crisis to the next, simply forgot about a half a million students awaiting their BTEC grades, and had to pull the results at the last minute.”

She added: “This summer has been a disaster for the Government, it has left students panicking about their future and colleges in turmoil. Williamson must resign and Boris Johnson must return to deal with this crisis.”