It came after the PM dressed up in full gear as he and the chancellor visited apprentices at the company's training academy. 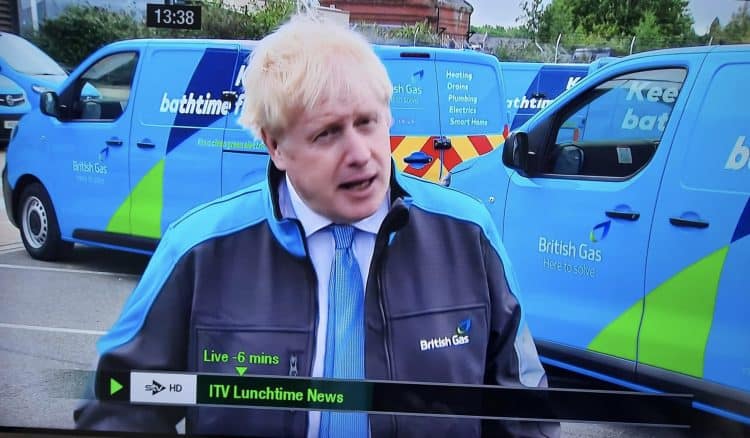 A British Gas tweet quickly became popular after one of their customer service staff did not get a joke related to Boris Johnson.

It comes as the prime minister and chancellor Rishi Sunak visited apprentices at the company’s training academy.

They both wore British Gas jackets, which prompted one Twitter user to suggest she had Boris Johnson around her house to fix the boiler.

“My boiler is still broken, he ate all my biscuits, and he left a giant turd in my toilet,” she said.

But she received a reply from the company’s customer service team, saying: “I’m sorry to hear this as it’s not what we expect from our engineers. Please DM me your full address and phone number so I can look into this?”

‘Is he doing Level 2 Gaslighting?’

Reaction elsewhere was of a similarly tongue-in-cheek nature.

One user asked why Johnson was wearing the British Gas uniform. “Is he doing his Level 2 Gaslighting training today or something?”

Another added: “They really need to cancel this series of Mr Benn now”.

And Daniel Caie joked staff levels at the firm “have reached a critical low” upon seeing Mr Johnson’s appearance.

Fire and rehire ‘symptom of bigger problems, like Brexit’

Earlier this year, a pro-EU party member warned that the scandal involving hundreds of British Gas workers losing their jobs is ‘only the symptom of a bigger national problem’, including Brexit.

Almost 500 engineers lost their jobs because they refused new contracts, which would have meant longer work hours and less pay.

Unite has called out the ‘fire and rehire’ practices, and said they are spreading “like a disease” in workplaces around the country. This comes despite Tory business minister Kwasi Kwarteng’s reassurance that “Brexit gives us the opportunity to have higher standards”.

Matthew Scott-Davies, member and administrator of Volt Cumbria, said: “I believe this government and industry, partly supported Brexit in order to de-regulate employees rights and wages, increase profitability at the expense of workers.

“For example, this is done by abolishing the minimum wage or the maximum weekly hours that can be worked.”

‘They want more, for less’

Matthew said that unless the certain issues are solved, these incidents will continue and increase in severity.

He said low wages, low value education and jobs, low productivity and the threat of automation are amongst problems that need addressing.

He added:  “Now, companies’ sole avenue for improving their profitability is through automation, efficiency and productivity gains. British Gas are improving theirs by changing the terms and conditions.

“In short, they want more for less.”

He also said a government “cannot sustain itself by dwindling tax receipts and increasing the taxes on a dwindling number of tax payers.”