Those exposed to neonicotoids - the world's most common insect repellant - muster only a third of their normal distance, according to the study 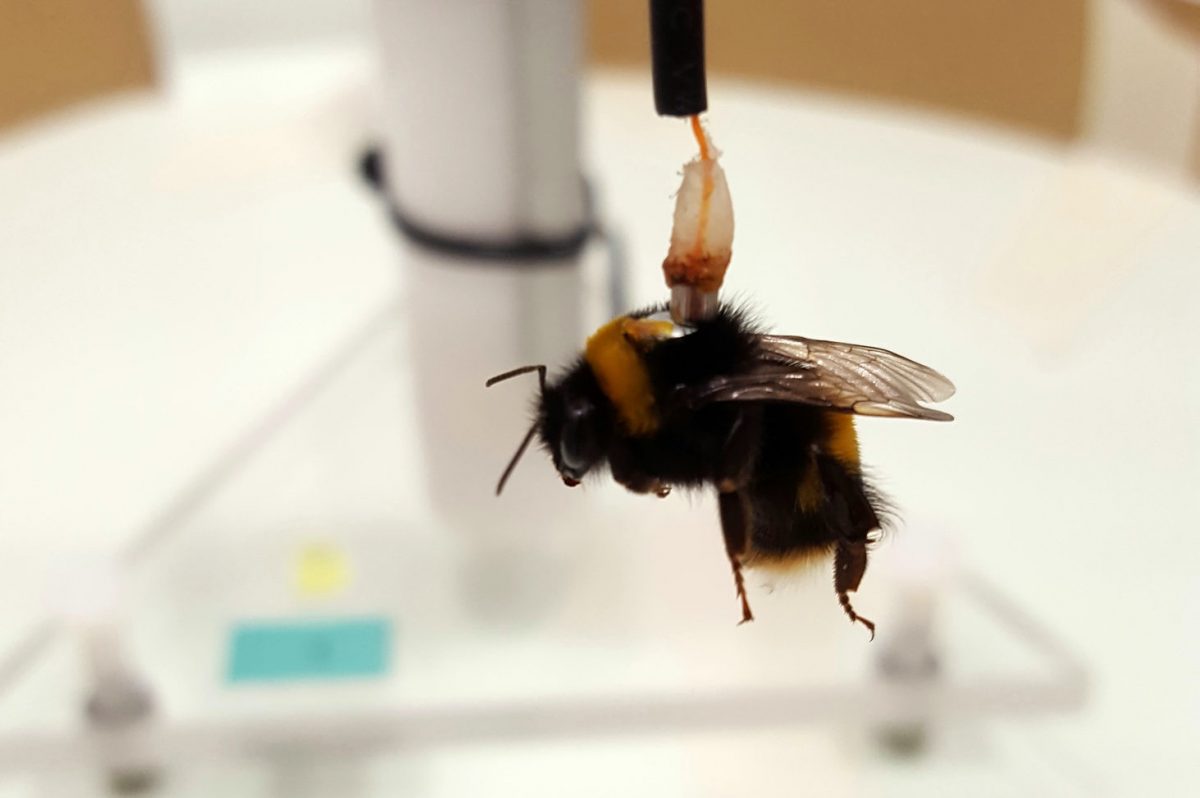 British bees are flying less than half as much because of pesticides, warns new research.

Those exposed to neonicotoids – the world’s most common insect repellant – muster only a third of their normal distance, according to the study.

This could reduce the area in which colonies can forage for food by up to 80 percent, say scientists.

Farmers use pesticides to keep insect pests from destroying their crops. But these chemicals may accidentally harm helpful insects.

Some can hurt a honeybee’s ability to find food and return home. Now scientists show at least one commonly used insecticide may alter bee flight.

In a new study, it made them more sluggish. Neonicotinoids are similar to nicotine – the natural stimulant in tobacco.

The findings, published in the journal Ecology and Evolution, were based on bees exposed to the neonicotinoid imidacloprid in doses they would encounter in fields.

Intriguingly, they seemed to enter a hyperactive-like state in which they initially flew faster than unexposed bees and therefore may have ‘worn themselves out’.

First author Daniel Kenna, from the Department of Life Sciences at Imperial College London, said: “Neonicotinoids are similar to nicotine in the way they stimulate neurons, and so a ‘rush’ or hyperactive burst of activity does make sense.

“However, our results suggest there may be a cost to this initial rapid flight, potentially through increased energy expenditure or a lack of motivation, in the form of reduced flight endurance.

“Our findings take on an interesting parallel to the story of the ‘Tortoise and the Hare’. As the famous fable states, ‘slow and steady wins the race’.

“Little did Aesop know that this motto may be true for bumblebees in agricultural landscapes.

“Just like the Hare, being speedier does not always mean you reach your goal quicker, and in the case of bumblebees, exposure to neonicotinoids may provide a hyperactive ‘buzz’ but ultimately impair individual endurance.”

The EU has outlawed the three neonicotinoids – clothianidin, imidacloprid and thiamethoxam – in crop fields although they can still be used in greenhouses.

Britain has backed claims the chemicals contribute to “colony collapse disorder”, a mysterious phenomenon that has seen bee populations plummet by up to 90 per cent in some cases.

Flight behaviour is crucial for determining how bees forage, so reduced performance from pesticide exposure could lead to colonies going hungry and pollination services being impacted.

Foraging bees are essential pollinators for the crops we eat and the wildflowers in our countryside, gardens and parks.

The team tested the bees’ flight using an experimental ‘flight mill’ – a spinning apparatus with long arms connected to magnets.

The bees had a small metal disc attached to their backs, which allowed the researchers to attach bees temporarily to the magnetic arm.

As the bees flew in circles, the team were able to accurately measure how far they flew and how fast under a controlled environment.

Lead author Dr Richard Gill, also from the Department of Life Sciences, said: “Previous studies from our group and others have shown that bee foragers exposed to neonicotinoid pesticides bring back less food to the colony.

“Our study on flight performance under pesticide exposure provides a potential mechanism to explain these findings.

“The negative effects of pesticide exposure on flight endurance have the potential to reduce the area that colonies can forage for food.

“Exposed foraging bees may find themselves unable to reach previously accessible resources, or incapable of returning to the nest following exposure to contaminated flowers.

“Not only could this reduce the abundance, diversity, and nutritional quality of food available to a colony affecting its development, but it could also limit the pollination service bees provide.”

Introduced in the mid-1990s, synthetic neonicotinoids share the chemical structure of nicotine and attack the central nervous system of insects.

But scientific studies have shown that neonicotinoids cut bees’ sperm count and scramble their memory and homing skills.

The bees can even develop a dangerous addiction to the insecticides, much like smokers for nicotine.