There were chaotic scenes at Trooping the Colour on Saturday, after a stand collapse resulted in 'several injuries' amongst the crowd. 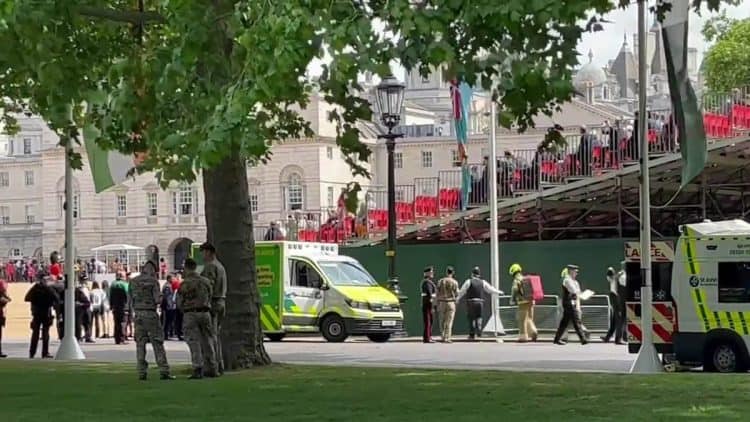 An evacuation has been ordered at the Trooping the Colour event near Buckingham Palace, after a stand collapsed and injured those who were in their seats. The London Fire Brigade has since been called to the scene.

Trooping the Colour stand collapse: What we know so far…

The event pays tribute to the serving monarchs of the UK, and it’s steeped in regal tradition and hundreds of years of history. This performance, due to take place next week, is set to go the extra mile for the Queen’s Jubilee year.

However, serious safety concerns have now been raised about one of the temporary stands erected, after the scaffolding holding it up collapsed in a heap. Four people have been reported injured, with some needing further medical treatment.

Three women and one man are believed to be the victims. Witnesses in the crowd described how one of the quartet appeared to ‘fall through’ the stand, just as spectators got to their feet for the National Anthem. The area was soon cleared out.

Was fun experience to watch until we stood up for the National Anthem, the stand next to us collapsed with someone falling through.

You'll see on the last photo in these 2 tweets the empty stand next to us and opposite too. pic.twitter.com/ZO3jM4SKVk

Pictures taken from the scene show ambulances parked next to the affected stand, with other emergency vehicles nearby. Police officers can be seen monitoring the area, with seats left empty in front of the royal parade.

Preliminary reports suggest that there are no fatalities as a result of this ordeal, but the fall has been described as ‘terrifying’ by those in attendance. We are expecting further updates from the Fire Brigade in due course.