You stay classy, Boris Johnson: The PM's speech at the Conservative Party Conference on Saturday has drawn substantial criticism. 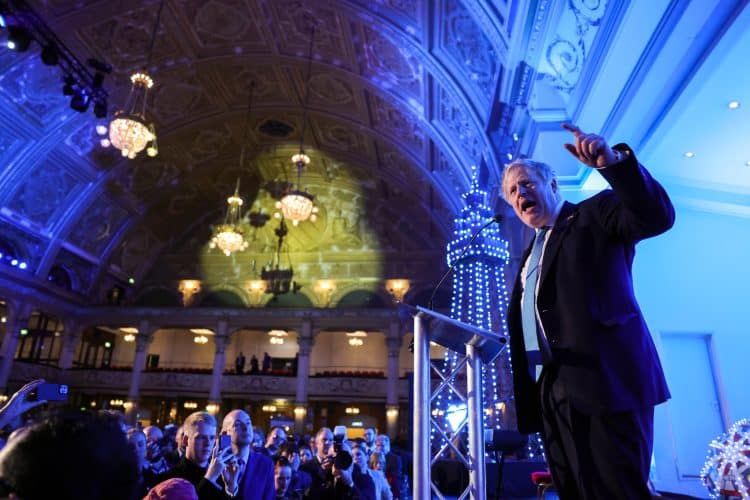 At this point, we know that Boris Johnson isn’t exactly the man to go to if you’re seeking a bit of decorum – and his speech at the Conservative Party Conference in Blackpool this week just about sums it all up.

The Tory leader made a series of foot-in-mouth statements about the situation in Ukraine – which, of course, were all lapped up by supporters and colleagues alike. Johnson relied on a few tired tropes to elicit a raucous reaction from the crowd.

Like any right-leaning leader worth their salt, Johnson immediately set his sights on ‘woke culture‘. What, exactly, that has to do with the Russian invasion of Ukraine is beyond us – but that didn’t stop the PM shoe-horning it into his address.

“We believe people should be able to do what they like.. as long as they don’t harm anybody else. We don’t need to be woke. We just want to be free, and that’s why talented people are fleeing Russia quite frankly right now. That’s why they’re flocking to the UK.”

Going through the gears, Boris was egged on by his fellow Tories, and went on to condemn Vladimir Putin’s disinformation campaign. Johnson scored a few cheap points against the BBC, however, by hinting that they only present ‘a version of the choice’.

“If Putin had a free press, he would have the BBC on his case. Whatever you think, he would have known the truth – or a version of it. Well if he had free, impartial responsible journalism, let me put it that way.”

However, the most jarring aspect of his speech came when Prime Minister Johnson likened the harrowing struggle of the Ukrainian people to the 2016 Brexit vote, and the UK’s alleged ‘fight for freedom’. These utterances have caused a major storm online.