He said: "It's just the most amazing achievement for me, because with bipolar disorder it's really difficult to keep yourself placed in the right frame of mind to do education". 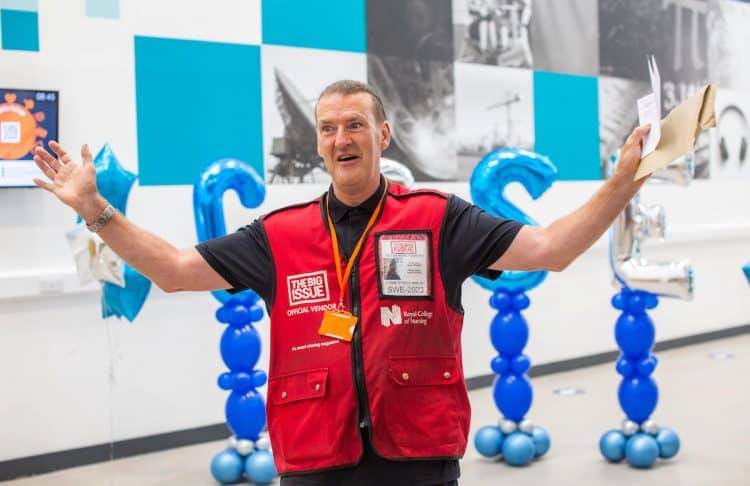 A Big Issue seller was thrilled after passing his GCSEs with flying colours – at the age of 58.

Hard-working Clive Rowe has suffered from alcoholism, bipolar and PTSD after living on the streets for more than 20 years.

But in recent years he has tried to turned his life around and was told today he had passed his GCSEs in Maths and English with 5’s in both subjects, equivalent to a C+.

Clive, of Plymouth, Devon, said he was shocked and overjoyed with his results, outdoing his level 3 grade he expected.

He said: “It’s just the most amazing achievement for me, because with bipolar disorder it’s really difficult to keep yourself placed in the right frame of mind to do education”.

“It’s a massive day for me, getting 5’s is just so far beyond all my expectations of what I wanted to do.”

Clive is a popular seller of the Big Issue outside the Theatre Royal in Plymouth and only got off the streets and begun seeking treatment for his addiction and struggles five years ago.

He added: “Big Issue has helped me so much, as when I was able to move into a house and get some medication, it helped me deal with my bipolar and mental health issues, which helped me feel like I was actually functioning.

“I started studying for GCSE English Function one in June 2019, which I passed in January 2020.

“After that, I was able to go onto a GCSE fast track where what you normally have to learn in two years you’d learn in four months.

“I started that in January 2021, nearly all of that was online which was good and bad.

“Each class would be 2-3 hours, but they were recorded so I was able to keep up with everyone else by practising it in my free time even though I was slower than everyone else.”

Living in a house with five other tenants, Clive struggled at the start of the pandemic but was eventually able to attend in person into City College in Plymouth.

He added: “The college phoned me up and asked why I hadn’t been attending online, and I said I was struggling with my domestic situation. So they asked if I wanted to come back into college, so within four weeks I was back in there, sometimes with only four other students.”

Clive also paid tribute to the Theatre Royal, where he has participated in the Theatre’s ‘Our Space’ program since 2018.

The program aims to help people struggling with their mental health through providing support, activities and communities, offering workshops aimed at developing skills that are transferrable to their day to day lives.

He added: “I was in a show called Citizen in 2019, which had a really big script for me of over one thousand words, so I had to really work hard.

“When I’d done my third act and it was a success, that gave me the impetus to go to college and start the process of getting this result today”.

Despite his exam success, Clive said he intends to get back to studying straight away.

He added: “My dreams for the future have expanded wonderfully, so I’m going to do a one year access course at the city college in September 2022, and then go to Plymouth University.

“I’m going to do an access degree in virtual arts and theatre, so I can come back through the doors after university at the Theatre Royal in two years.

“I’ve really got to thank the theatre, Big Issue and the college for being so supportive of me along the way. It’s been a really amazing day”.