“We are disadvantaged people and this school gave us a way to move up," one pupil said. 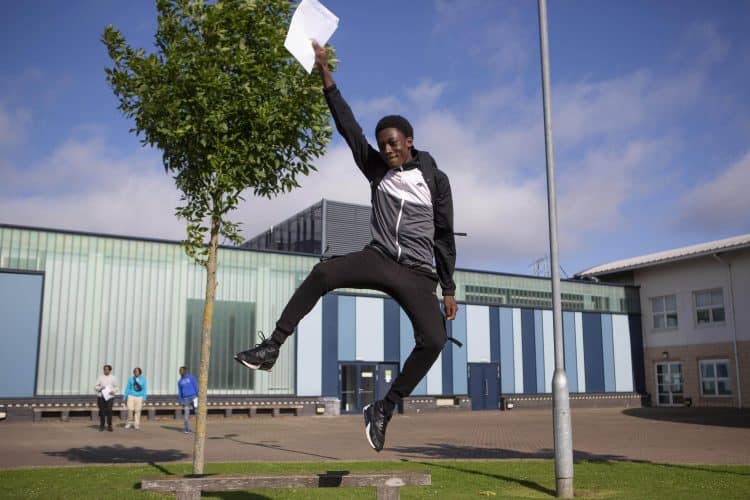 Pupils at an inner city state school are celebrating after 55 teenagers got the A-level grades needed for them to study at Oxbridge, which is more than the offers made to Eton College students.

The majority of pupils at Brampton Manor Academy in Newham, east London, are from ethnic minority backgrounds, in receipt of free school meals (FSMs), or will be the first in their family to attend university.

Sam Dobin, Brampton’s sixth form director, said he is “delighted” that 55 of its students are now set to study at Oxford or Cambridge University this year, which is more than leading independent schools.

“Black excellence in this building”

After a bout of excited screaming, hugs and hyperventilating, Nyat Aron-Yohannes said there was “black excellence in this building” after hearing about how many of her classmates are now heading to Oxford or Cambridge.

The 18-year-old of Purfleet, Essex, who got three A*s and is going to Oxford to study philosophy, politics and economics, said “the struggle was real”.

She added: “We woke up early to come into school and sometimes it did not even seem like it was worth it at those times when the grades were not matching up to your work ethic.

“Then lockdown happened and you had to persevere on your own because you did not have your classmates or teachers physically nearby to push you.

“You had to find strength somewhere else.

“I am just grateful it paid off, we were walking in faith.”

She said she was happy for her relatives, particularly her father Abraham, adding: “I am the first in my family to go to Oxford.

“My father told me this could be possible.

“His words were of motivation.”

Ade Olugboji, 18, of Purfleet, Essex, got four A*s and is going to study maths and philosophy at Oxford.

He said: “Brampton has a philosophy of hard work.

“I knew there was going to be work but I did not understand the level until I got here.

“The thing is once I saw everyone else working so hard and so well, it did not seem that it (success) was impossible.”

In all, 350 students took their A levels at the school this year with 330 getting into Russell Group universities, including the 55 who got into Oxbridge.

In 2014, just one Brampton student received an offer for Oxbridge, but by last year this had risen to 51.

The oversubscribed selective sixth form accepts 300 to 400 students a year and some of them travel for as long as two hours each way to attend.

Kenny Ikeji, 18, of Dagenham, east London, got the three A* grades he needed to study computer science at Harvard.

After picking up his grades, he said: “The feeling is good and seeing everyone happy as well is great because during the two years (of study) everyone was stressed out but on a day like this, it is as if all the hard work has paid off.

“There are lots of people going to Oxford and Cambridge and I am not surprised because you would expect it when you see how hard everyone here works.

“Once they had their university offers, there was a new fire in them to study to make sure they got the grades to go.”

He described the school as a place where people do not let their inner city surroundings affect their hopes.

He said: “It is peer pressure because when everybody around you is studying, you see your friends getting better grades and then you want to get better grades.

Susan Hope, 18, also from Dagenham, is going to study education at Cambridge with the aim of a career in child psychology.

She said: “I did not want to apply (to Cambridge) because of the fear of me getting rejected, but coming here made me think ‘If they can do it, then why can’t I?’

“Coming from this area you do not see that many people going to university at all, but if you take that chance, work hard and you can achieve anything – that is what Brampton teaches us.

“I came here expecting to have to work hard, and I think that is just the work ethic the school instils in us. We are all willing to work for it and we are in a support system that just nudges us a bit further to achieve those dreams that we are all pretty much capable of.”

Nana Arthur, 18, of Rainham, east London, who is heading to Cambridge University to study philosophy, said: “We are disadvantaged people and this school gave us a way to move up.

“To be honest, as soon as you come into this school you can’t not succeed – it is quite infectious.”

Her friend, Kerena Arthur, of Dalston, east London, also 18, is going to Oxford to study politics, philosophy and economics after getting three A*s.

She said: “I am very, very pleased. I was not expecting it at all and struggled a lot but I worked hard. It is crazy.

Romero Featherstone, 18, of Plaistow, east London, said he was “a little” surprised but pleased after he got the three A* grades which will take him to Cambridge to study chemical engineering.

He said: “The school prepares you well. The school regularly get people into Oxbridge, so going here meant that I thought I had a good chance.”

Mr Dobin said the students had overcome a lot of disruption over the past two years but “they have kept incredibly determined, focused and motivated”.

He added: “The results today just demonstrate that they are being rewarded for the immense effort they have put in and the talent they have shown.”