"Several French people have been given hernias from laughing at the videos of us queueing then fighting over petrol," one person said. 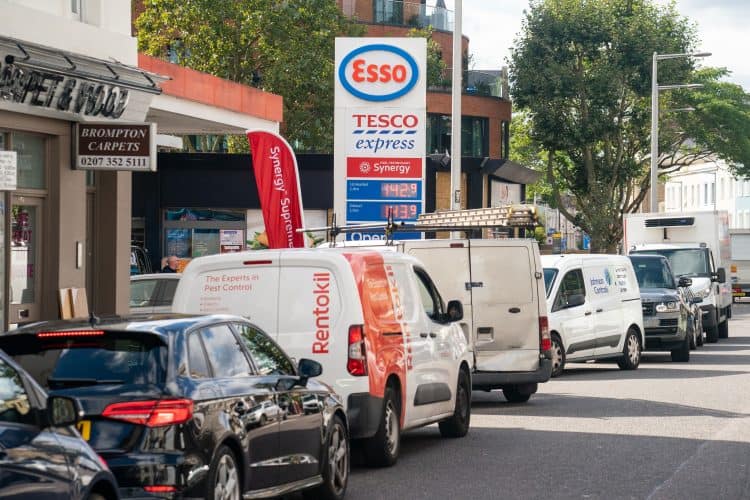 Fights have broken out across UK petrol stations as pumps run dry and punters lose their cool.

Petrol station staff are being subjected to “unacceptable” levels of abuse, the industry has warned, with one-in-four stations currently empty amid the escalating crisis.

Ministers said they expected the situation to improve, but the first troops have been deployed driving tankers and are expected to appear on the roads “in the next couple of days”.

The pump pandemonium has led to people dubbing the fracas the ‘Battle of Aginforecourt’ in reference to the Hundred Years’ War battle which took place near Azincourt, in northern France.

The unexpected English victory against the numerically superior French army boosted English morale and prestige, crippled France and started a new period of English dominance in the war.

But it looks like it is they who have had the last laugh.

A new Led By Donkeys billboard points out that they’re “not fighting on forecourts in France” as the situation in the UK intensifies.

The image is a play on the famous political campaign for the Conservatives which read “Labour isn’t working” ahead of the 1979 general election.

It was revived for the general election campaign the next year after the government lost a vote of no confidence in the wake of the Winter of Discontent.

Earlier this week they also sent a timely reminder to Nigel Farage as Boris Johnson prepared to send the army in to resolve the current petrol crisis.

Leading people to ask when he will be packing his suitcase.