The baking author and teacher described the government's settlement scheme to allow EU citizens to stay in the UK as "shambolic". 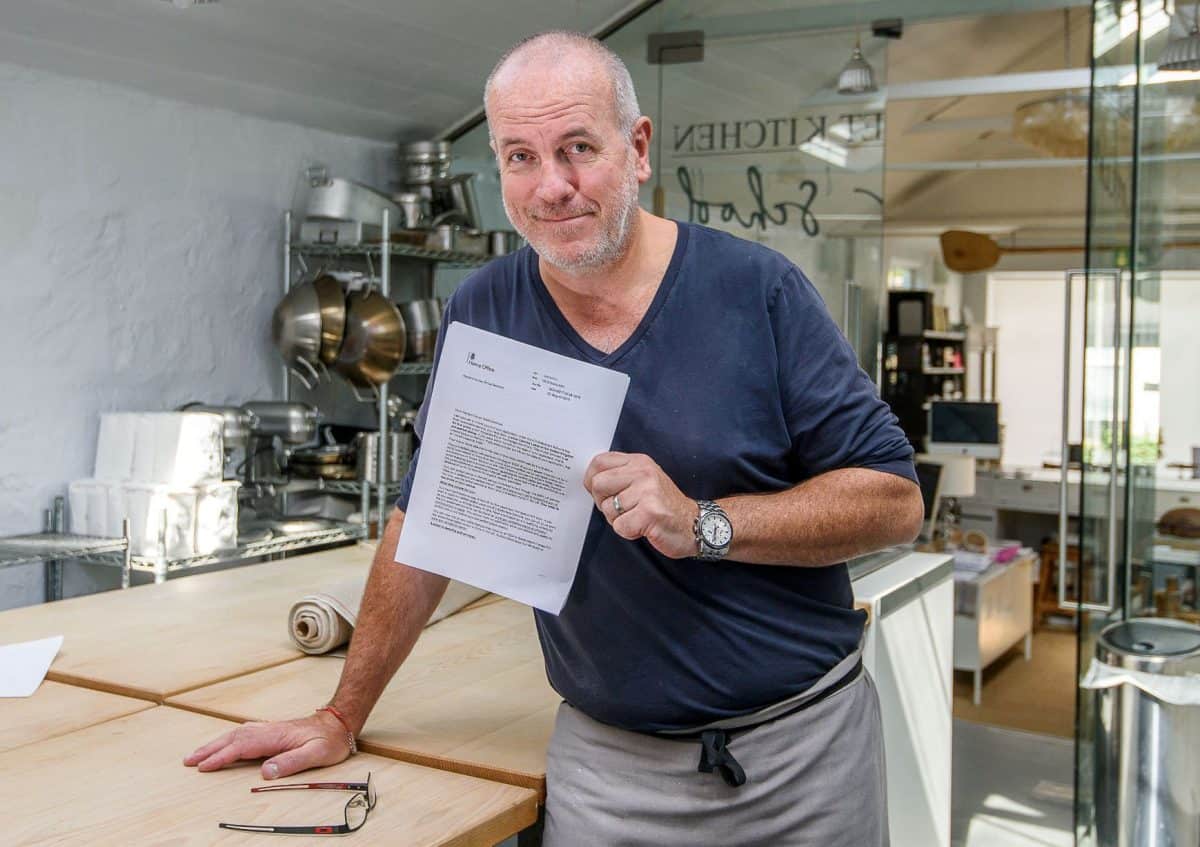 An award-winning TV baker who has lived in the UK for over 30 years says he feels like he has been “slapped in the face” – after receiving a letter from the Home Office that sent “chills down his spine” denying him settled status.

Richard Bertinet who has lived in the UK for 31 years and has three British children owns a cooking school and bakery in Bath and has written several award-winning cookbooks.

The top chef described the government’s settlement scheme to allow EU citizens to stay in the UK “shambolic”.

Richard Bertinet was only granted pre-settled status, which means he will need to apply again for the right to remain in the UK in five years. The baker who was born in Brittany, France, has lived in the UK for 31 years.

He has a generated a huge following, published a number of baking books and was acclaimed as a “food champion” by the BBC, thanks to appearances on shows like Saturday Kitchen.

But despite the life he has built for himself here, the Home Office has deemed that under the EU Settlement Scheme, Mr Bertinet he has only been granted “pre-settled status”.

This means he can only remain in the UK for a further five years, before needing to apply again.

The process included sending various documentation including his identity, residence, and history in the UK – where the popular chef has a British wife and three British children.

Mr Bertinet, of Bath, Somerset, says the letter sent “a chill down my spine” and felt like “a slap in the face” – but says messages of support have come flooding in, including from fellow chef Nigella Lawson.

And alongside the photo, he wrote: “31 years living in the UK without a break for more than a few weeks holiday (more years than I lived in France).

“Originally employed without gaps then started several businesses employing 10s of others and one that attracts visitors in to the UK from overseas.

“Submitted all evidence requested, as requested. NOT GOOD ENOUGH FOR SETTLED STATUS.”

Speaking out about the Home Office decision, he added: “I applied as we watched the news about Brexit and we were worried about having to reapply for residency.”

He said that the letter “sent a chill down my spine”, and insists, “I will fight it”.

“You feel like you spend 31 years of your life living here but it is not your home,” said Mr Bertinet.

“I have paid taxes, I am grateful for the NHS and I have employed hundreds of people for my businesses.

“I have never had a British passport as I have a French passport. It leaves a very sour taste in the mouth.

“When people today say they are embarrassed about their country, you know something is not right.”

Meanwhile his family – wife Jo, and his three children – are unaffected as they are all British citizens and possess British passports.

The letter from the Home Office states: “You have permission to stay in the UK for five years from the date of this letter.

“If you wish to apply for settled status under the EU Settlement Scheme, you can do so as soon as you meet the qualifying criteria for this.

“More information on the qualifying criteria for the EU Settlement Scheme can be found at: https://www.gov.uk/settled-status-eu-citizens-families/when-to-apply.

“You can also rely on any rights that you may have as an EEA (European Economic Area) or Swiss citizen under EU law whilst those rights remain in force in the UK.”

Following the letter, he said he will reapply for settled status and pay the £80 fee.

But he fears for EU citizens in a less fortunate position than him, and pondered: “There is 2.9 million people in my situation but who will fight for them?”

Mr Bertinet said he has been left humbled by messages of support on social media, with many calling the decision “shocking” and “truly awful”.

Celebrity chef, Nigella Lawson, sent him a message of support, and said: “This is idiotic and wrong, and so hurtful.”

Bath MP, Wera Hobhouse, signaled she will be fighting Mr Bertinet’s corner with the government.

In a tweet, the Liberal Democrat MP said: “I am shocked by this latest example of the despicable treatment of EU citizens – who are the cornerstones of our communities – in our country and in Bath.

“I will be taking this up with the government.”

The letter to Mr Bertinet from the Home Office also describes pre-settled status as ‘limited leave’.

Under a section of the letter with the sub-heading ‘What this means for you’ it says Mr Bertinet has ‘permission to stay in the UK for five years from the date of this letter’.

It adds that Mr Bertinet can apply for settled status as soon as he meets the ‘qualifying criteria’.

Mr Bertinet says that he plans to appeal the decision on Tuesday, as soon as the Bank Holiday weekend is over.

READ MORE: Stopping Freedom of Movement on October 31 is nuts, why pretend otherwise?

How to apply for Settled Status, Deal or No-Deal Brexit