However high the wannabe PMs’ ambitions soar, they are all ignoring the massive come-down when Brexit reality actually kicks in. 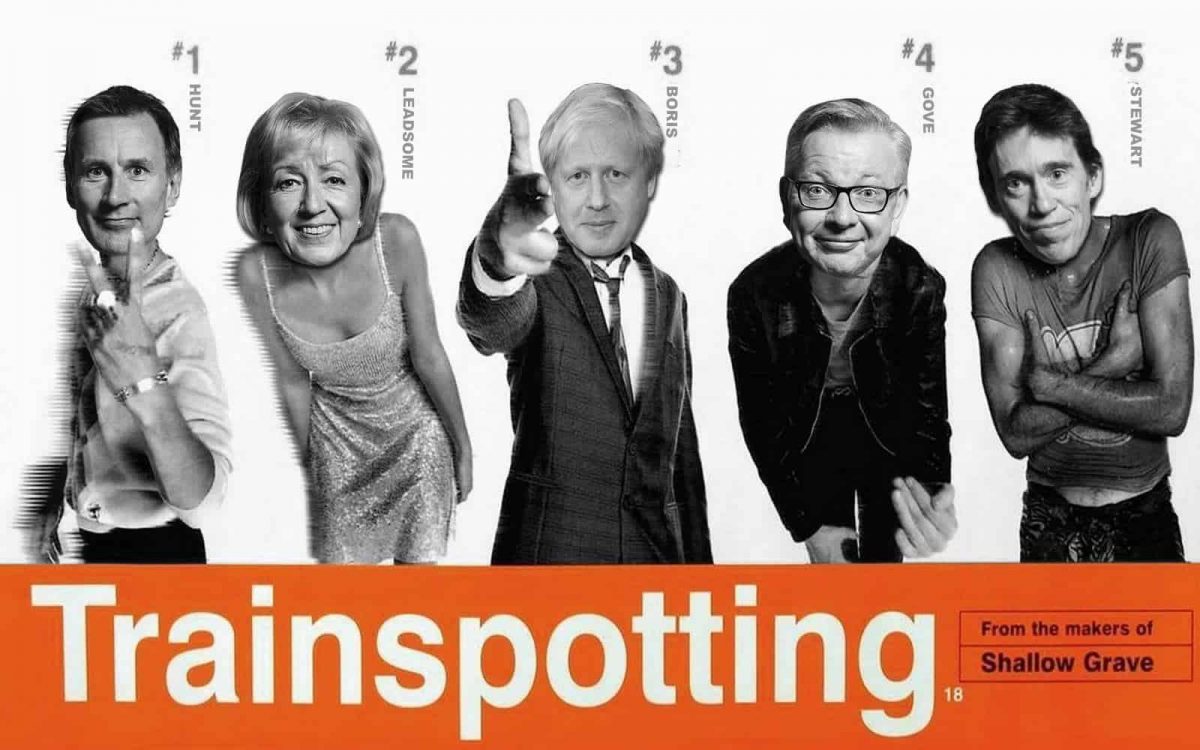 The Tory leadership race has become a bit of a crack, eh?

As the race to replace Theresa May has spiced up somewhat, what have we learned about the candidates that are highest? – In the polls, that is.

When it comes to making headlines, these would-be PM’s are smoking, keeping their Conservative colleagues hooked with various psychedelic revelations.

International Development Secretary Rory Stewart tripped – up with his opium confession jeopardizing his future ability to travel to the US where immigration take a dim view of illegal drugs taking.

Stewart, 46, who would probably be “Spud” if we pretend he has to be a character in Trainspotting, said smoking opium at a wedding in Iran was a “stupid mistake.” – Presumably particularly stupid as he was actually in Iran on a fact finding visit about the drug.

Not to be outdone by her colleagues’ druggy  exploits, Andrea Leadsom, the former Leader of the House of Commons appears to have been easily led at the University of Warwick. The Hard Brexiteer insists she didn’t touch the hard stuff, but “smoked weed at university and have never smoked it again since.”

Brexit Ultra Dominic Raab, 45, who would definitely be “Sick Boy”in Trainspotting, confessed to smoking pot in a suitably perfunctory and joyless manner.

“At university, I tried cannabis, not very often as I was into sport,” said Raab, who as the Member of Parliament for Esher and Walton called for drug dealers to be deported.

Sajid Javid felt the need to confirm he was not on any drugs. Perhaps as the Home Secretary recently promised to get tough on the middle-class cocaine users who are fueling the unprecedented county lines and knife crime epidemic his government has failed to tackle.

Don’t think he was referring to his colleagues, though.

Jeremy Hunt, presumably seeking to further distance himself from Theresa May who’d insisted the naughtiest thing she had ever done was “run through a field of wheat,” came out with the startling admission: “I think I had a cannabis lassi when I went backpacking through India.”

We won’t trot out what David Cameron was into, but all these substance abuse admissions began when Michael Gove sniffed out a rival campaign about to squeal.

Gove, who as Secretary of State for Education banned teachers from teaching for life if they had been convicted of class A drugs possession, now admits he had enjoyed some little white lines himself.

Tory former prisons minister Crispin Blunt, chairman of the all-party parliamentary group for drug policy reform, asked if maybe it was time his colleagues dropped they hypocrisy and urgently sort out Britain’s messed up drugs laws.

“Sadly Michael – like others before him – has delivered a politically crafted and deeply unconvincing handwringing statement of regret for committing a victimless crime. The victims have largely been created by policy and the law,” explained Blunt.

“As a leadership candidate he should have used the opportunity of his own confession to join a vital and urgent policy debate.”

“I took drugs on several occasions at social events more than 20 years ago,” the former Justice Secretary Michael Gove told the Daily Mail. And seemed to blame journalism.

“At the time I was a young journalist,” he added. “But I don’t believe that past mistakes disqualify you.”

And reading some of his journalism, the excuse is almost credible. Certainly journalism’s loss is politics’ loss in Gove’s case.

The Mail on Sunday have republished today one of his Telegraph columns snorting at “middle-class professionals.” The paper says it was penned hours before Gove hosted a “cocaine-fuelled party” to illustrate his rank hypocrisy.

Gove’s addled column sniffs at any attempts to reform drugs laws and even at attempts to minimize harm with drugs education.

“There is no greater sin in journalistic eyes than hypocrisy,” the young journalist snorted in his opinion piece, adding the lucid lines: “How dare the minister endorse family values while himself straying?”

Despite Boris Johnson being associated with the ugly excesses of his Bullingdon Club chums who got up to all kinds of japes such as burning £50 notes in front of homeless people, his campaign team prefer to refer back to statements in the past, where he claims “I sneezed and so it did not go up my nose. In fact, I may have been given icing sugar.”

As London Mayor BoJo told GQ Magazine that he “had quite a few” cannabis spliffs and “it was jolly nice.”

He also confessed to trying cocaine and said he remembered getting high “vividly and it achieved no pharmacological, psychotropic or any other effect on me whatsoever.”

Whatever did or did not up his growing nose, the criminal charges Boris Johnson has avoided this week are – unsurprisingly for someone so allergic to the truth it makes him gibber like an albino baboon – to do with lying.

On Friday, his legal team won their appeal to overturn a summons for him to face trial for misconduct in public office for lying about the UK sending £350m a week to Brussels.

The unfunny joke here is that whatever psychotropic substances our would be next PM’s have taken, they appear to be unable to come back down to reality when it comes to promising their supporters ever more hallucinatory and unreal Brexit possibilities.

Goldman Sachs estimate that the UK hasn’t been losing £350m a week – as Boris Johnson claimed – but the country has missed out on £600m in economic growth each week since the referendum. The Bank of England put the figure at £800m.

The chaos of Brexit has already cost our country £66bn in just under three years in missed opportunities and investment, according to Standard and Poor’s – around £1,000 for every person in the country – and the mess some candidates are proposing has not even taken place yet.

In a flight of fantasy in the Sunday Times, Johnson insists he would somehow make the country’s most capable leader, saying he is the only alternative to Jeremy Corbynor Nigel Farage who he compares to mythical monsters from Ancient Greece.

“I truly believe only I can steer the country between the Scylla and Charybdis of Corbyn and Farage and on to calmer water,” insists BoJo.

“This can only be achieved by delivering Brexit as promised on October 31 and delivering a One Nation Tory agenda.”

What Johnson does not explain is how – on or before October 31 – with a Tory leadership contest just kicking off for the next few weeks, and an early summer holiday for MPs straight after to stop their next leader facing an immediate vote of no confidence, he will manage, as he has promised, to come up with a solution to the Irish backstop which stops the Northern Irish peace agreement unravelling, and get Parliament to agree and renegotiate the whole withdrawal agreement with the EU, while he now threatens to withhold their £39 billion settlement – money our country owes – which not paying back will tank all confidence in the UK economy.

“In getting a good deal, money is a great solvent and a great lubricant,” Boris tells the Sunday Times about his gleeful threat. Perhaps currency has been a lubricant for his nostrils, but currency is clearly something that helps solvency only when an economy is not wilfully devaluing itself by announcing it won’t be paying its debts.

It is not actually only impossible according to any international law, but would crash the UK economy if it were not a figment to Johnson’s addled imagination.

Two years ago today the country went to the polls in the snap General Election Theresa May called to make the country “Strong and Stable” and give the Tories the majority and the mandate for the Brexit many of them didn’t even really want to begin with.

The Tories lost their majority, having to rely on the cranky DUP who are now backing away from the precipice of a no deal Brexit, insisting the union of the United Kingdom is the most important thing for them after all.

They are even more addled when they vow to prepare for no deal as if it’s something new. That didn’t help Theresa May at all.

However high the wannabe PMs’ ambitions soar, they are all ignoring the massive come-down when Brexit reality actually kicks in.