Hancock was keen to stress that he and Ms Coladangelo had not been having “casual sex”, despite the CCTV images. 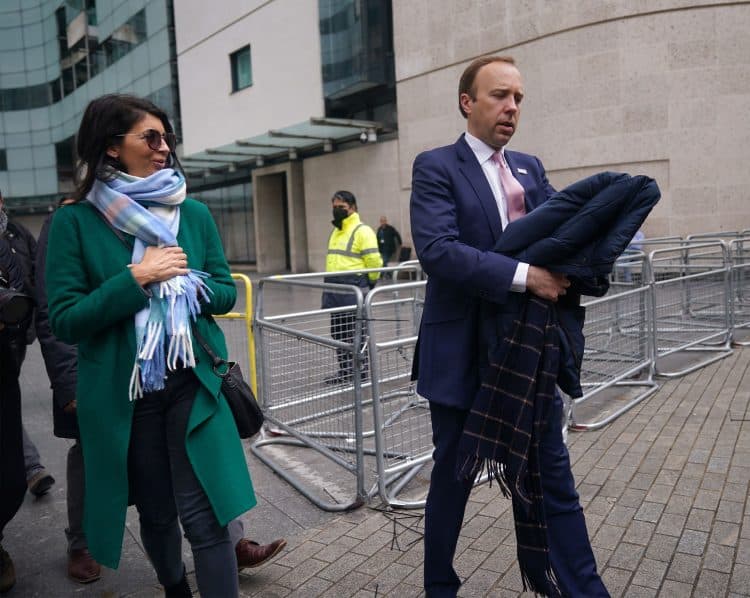 No-one will be prosecuted over the leaking of CCTV footage that showed former health secretary Matt Hancock kissing his aide while coronavirus social distancing guidelines were in place.

The Information Commissioner’s Office (ICO) said it has found “insufficient evidence” to prosecute two people suspected of unlawfully obtaining and disclosing the footage from the Department of Health and Social Care (DHSC), which ultimately led to Mr Hancock’s resignation from the Cabinet in June last year.

The ICO said it launched a criminal investigation after it received a report of a personal data breach from the DHSC’s CCTV operator, EMCOR Group plc.

“Forensic analysis revealed that the leaked images were most likely obtained by someone recording the CCTV footage screens with a mobile phone,” the regulator said in a statement.

The ICO said that six mobile phones seized during searches did not contain any relevant CCTV footage.

“After taking legal advice, the ICO concluded that there was insufficient evidence to charge anyone with criminal offences under the Data Protection Act 2018. The ICO has therefore closed its criminal investigation,” it said.

A still from the leaked footage showing Mr Hancock and Gina Coladangelo was originally published by The Sun newspaper.

The Prime Minister subsequently claimed, through his spokesman, that he “considered the matter closed” after Mr Hancock apologised to him for breaking social distancing rules with the embrace inside his Whitehall office.

But the following day the married West Suffolk MP announced he was resigning.

However, security reviews were announced and new Health Secretary Sajid Javid said he had had the camera disabled.

As part of the data breach probe, the ICO said in July that two raids were carried out in the south of England where computer equipment was seized.

The Sun called the raids an “outrageous abuse” that could deter whistleblowers from coming forward.

Mr Hancock has since told The Diary Of A CEO podcast that he broke the guidelines because he “fell in love”.

“That’s something that was completely outside of my control and I of course regret the pain that that’s caused and the very, very, very public nature … but I fell in love with someone,” he said.

He was keen to stress during the podcast interview that he and Ms Coladangelo had not been having “casual sex”.

A DHSC spokesperson said: “We note the outcome of the ICO’s investigation and will continue to work with them to learn any lessons from this incident.

“We take the security of our personnel, systems and estates extremely seriously.

“Since this incident, we have worked with security specialists from across government to review procedures and will keep them continually under review.”