“There is no plan for no deal, because we’re going to get a great deal” promised Boris Johnson… only to resign as Foreign Secretary when the Brexit deal was actually being negotiated and describe it as Britain wearing a “suicide vest” A billboard has been unveiled at Glastonbury Festival which its creators say shows “how […] 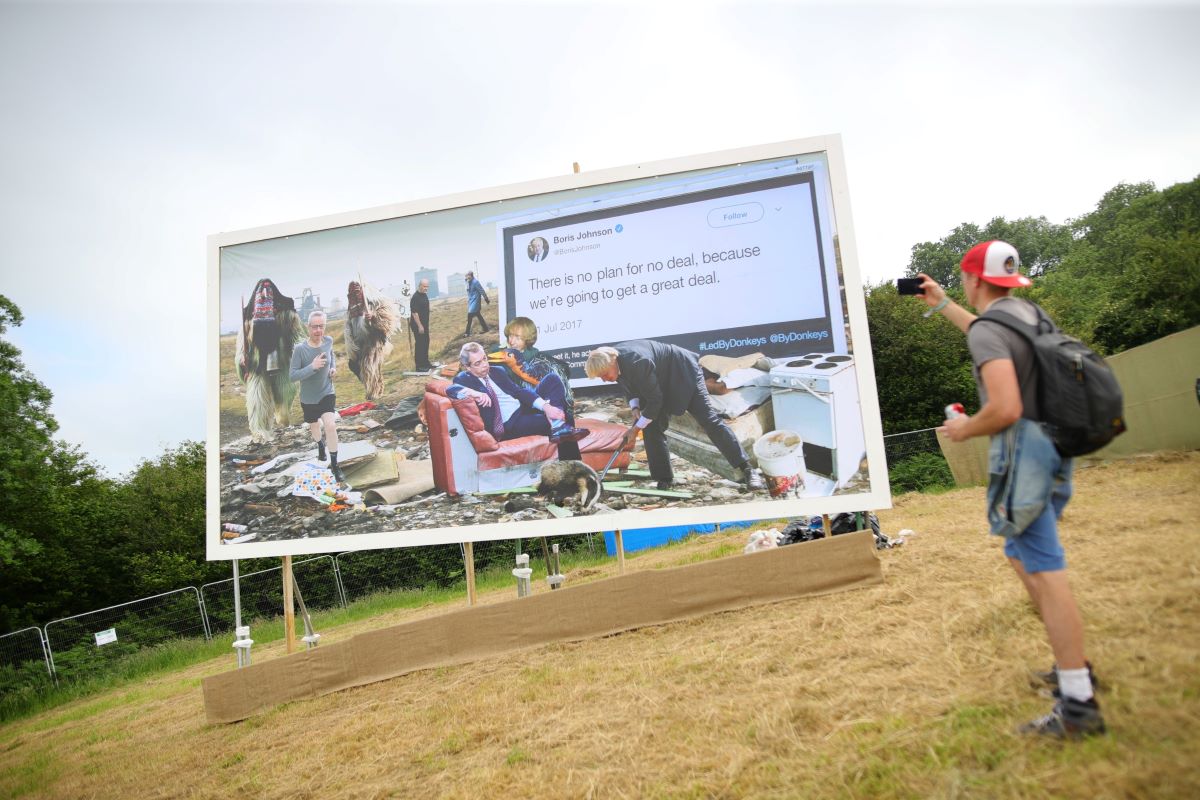 “There is no plan for no deal, because we’re going to get a great deal” promised Boris Johnson… only to resign as Foreign Secretary when the Brexit deal was actually being negotiated and describe it as Britain wearing a “suicide vest”

A billboard has been unveiled at Glastonbury Festival which its creators say shows “how little we can trust” Conservative Party leadership candidate Boris Johnson.

The billboard, created by anti-Brexit campaigners Led By Donkeys in collaboration with Cold War Steve, a satirical collage artist, features a quote from Mr Johnson on the possibility of a no-deal Brexit.

“There is no plan for no deal, because we’re going to get a great deal,” the quote reads, surrounded by an apocalyptic scene featuring Mr Johnson, Brexit Party leader Nigel Farage, Tory MP Michael Gove and others.

“There are so many outrageous Boris Johnson quotes to choose from but this one feels particularly relevant now,” James Sadri, from Led By Donkeys, told the Press Association.

“Less than a couple of years ago he was trying to reassure the country that we’re going to get a great deal, and today he’s saying if he’s prime minister he’d be prepared for us to crash out of Europe without one.

“It’s another layer of this surreal moment in British history that this charlatan is about to reach the highest office in the land with a nod from less than 0.3% of UK voters.

“But it’s the quote on that billboard which really shows how little we can trust him.”

The billboard is the latest offering from Led By Donkeys, whose other billboards have included one targeting an absent Mr Farage during day two of a Brexit march earlier in 2019 with signs asking “Where’s Nigel?”

“Like with all our billboards, we’re using a bit of humour to make the serious point that we need some accountability in this moment of crisis,” Mr Sadri said of the Glastonbury billboard, which will stay for the duration of the festival.

“We can’t hope to solve any of our problems today if politicians can say something one day and it’s forgotten the next. We’re bringing accountability with humour.”