The factory produces all of McDonald’s iconic beef burger patties - with roughly three million burgers made per day. 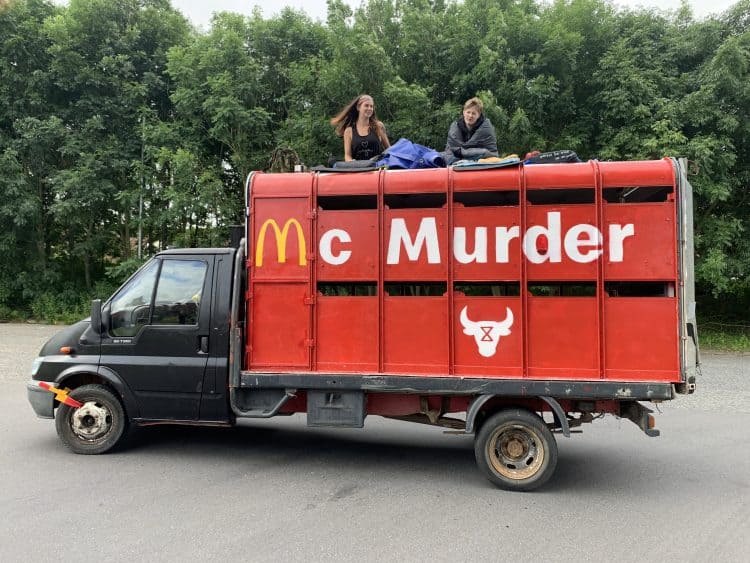 Animal rights protestors today (Thurs) blockaded a factory believed to be the only one in the UK to produce McDonald’s burgers using a tower made from bamboo.

The factory produces all of McDonald’s iconic beef burger patties – with roughly three million burgers made per day.

Trucks with the famous golden arches daubed on the back with the words ‘McMurder’ were driven to the scene this morning.

The group said it was demanding that ‘McDonald’s switch to a fully plant-based food menu by 2025’.

Animal Rebellion describes itself as a mass movement using nonviolent civil disobedience to call for a sustainable plant-based food system.

The activists have set up a blockade using trucks, tents, bamboo structures and a roof occupation in the early hours of this morning to stop the facility from distributing burgers.

The protestors have said they will stay as long as it takes until McDonald’s commits to changing towards a plant-based menu.

Rose Patterson, a spokesperson for Animal Rebellion, said: “We’re living in a time where massive change is possible, but our window to act on the climate crisis is closing quickly.

“The meat and dairy industries are responsible for 80-90% of Amazon deforestation, at least 18% of global emissions, and for exploiting and killing billions of animals every year.

“To save ourselves and the future of our children, we must start transitioning towards a plant-based food system.”

They are encouraging others to join their protest and said it’s ‘only just beginning’.

A statement from the group said: “This is our moment Now’s the time to take a day off, call in sick, grab your friends, and join the blockade.

“Throughout history people have risen up and seen the world change around them McDonald’s is a symbol of an industry that needs to change in order to feed the world and ensure future generations have a chance to build a life and a family alongside the animals we share this earth with.

“Together we can put pressure on McDonald’s to do what is right for all life and go plant-based by 2025.”

This protest comes after the group shut down four McDonald’s distribution centres two months ago to call out the meat and dairy industries for their role in the climate and ecological emergency causing economic disruption to McDonald’s supply chain.

Officers have been deployed at the scene on Luneburg Way to ‘allow people to go about their lawful business’.

A spokesperson from Humberside Police said: “Officers are in attendance in order to allow people to go about their lawful business and to protect the right of individuals to take part and exercise their right to peaceful protest.

“The roads in and around the industrial estate remain unaffected as the demonstration is at the entrance to one premise.

“We are liaising with representatives from all sides to address concerns.

“We are committed to fulfilling our duty to protect the human rights of all the groups and individuals with an interest in this situation.”