Designed to be the ultimate modern city slicker, the Honda e doesn’t lack for charm or appeal, but what’s it like in the real world? 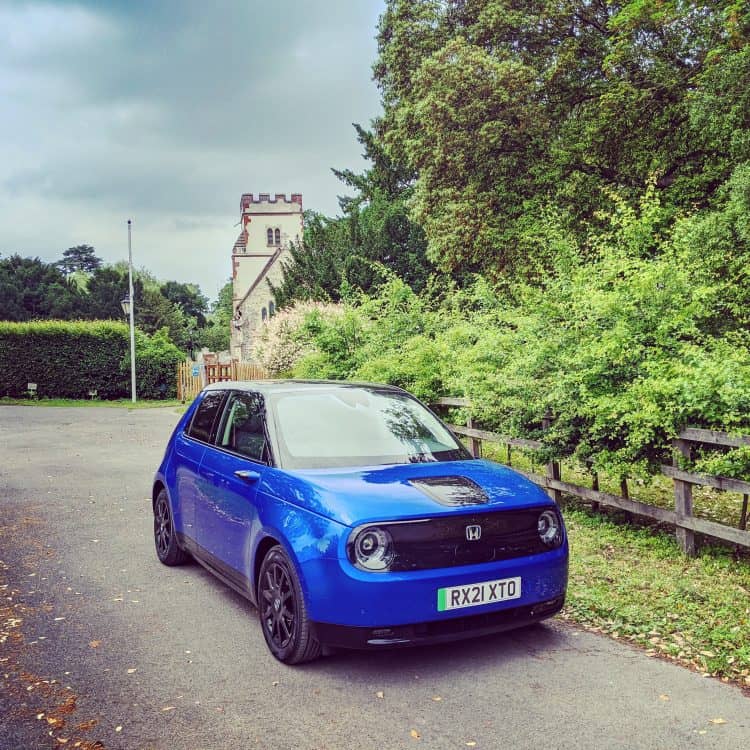 Electric vehicles haven’t been to everyone’s taste. Range anxiety is the most commonly identified issue, with public chargers sparse and unreliable in comparison to their petrol and diesel equivalents. The Honda e doesn’t exactly assuage these fears, with a claimed range of 130 miles. Honda, however, has approached the concept a little differently.

Honda says that it studied several major European cities in designing the Honda e, with the aim of delivering the ultimate city car. It’s compact, at only 3.9m long and 1.75m wide and, it’s worth mentioning straightaway, the turning circle is a staggering 4.5m. A three-point turn becomes a one-point turn and Austin Powers wishes he had one of these in Dr. Evil’s layer. You can turn it around anywhere.

Turning circles might seem an odd thing to be enthusiastic about, but in an urban setting it matters. As does functionality such as self-parking. The Honda e passes this test with flying colours, too. If you need assistance parking a car this size, that is.

Other factors of urban living are speed bumps and potholes. Again, the Honda e comes up trumps. The ride is settled and it’s not too crashy over imperfections.

The cabin is well thought out. It’s different and the use of space is clever and relaxed. The screen runs all the way across the dashboard and the passenger gets their own touch screen, too. It’s a spacious cabin, enhanced by the panoramic roof, and it’s quite relaxing. There’s enough space in the rear for three passengers, Isofix and a big enough boot to fit your shopping in.

You wouldn’t want to sit in the back for a long journey, but then this really isn’t what this car is designed for. It limits its use cases, certainly, but it is laser focussed on delivering an optimum urban driving experience. It is, really, a lifestyle car and it makes no apology for that. The quirky looks drew attention and I got a surprising number of questions about it. People were enthusiastic about the Honda e. It looks like the car of the future we were promised 30 years ago and it stands out in the crowd.

Instead of wing mirrors, there are cameras. Two screens at either end of the dashboard display the images. This is weird at first, but you soon get used to it. The only issue I found was the depth perception on screen is no competition for the human eye. I pulled out at a roundabout and the next car coming flashed across behind me and all I saw was a red blur – once my heart rate settled from realising they hadn’t gone into the side of me, it was all good.

The model tested was the Honda e Advance, which is the sportiest Honda e available. The standard Honda e achieves 0-60 in 9.0secs – the Honda e Advance wipes the floor with this and does it in 8.0secs. It’s rear wheel drive, too, so potentially a cheeky little number.

It pulls off that wonderful trick of making it feel like you’re going faster than you actually are. The seating position is low, the steering wheel is small in your hands and, if you really poke it, the rear end will react when pulling out of junctions.

A spot of B-road bashing?

When hustling it along country lanes, you start to feel the weight, 1555kg, and it can struggle to position itself upon entering and exiting turns. But not in a terrifying way. It’s actually really enjoyable. Because you can absolutely nail the throttle you can enjoy all the power. With regenerative braking on top of the standard brakes, it stops quickly, too. It wasn’t designed for this, but the Honda e is a good laugh on a decent B-road.

Acceleration isn’t mind bending, but there’s enough power to get things moving at slow speeds. It runs out of puff a little once you reach 50mph, but in those urban environments you’ll briskly enough arrive at 30mph.

Charging the Honda e – are you in for a shock?

We need to talk about that range. In real world conditions it’s closer to 100 miles and that is undoubtedly a sticking point. Designed for short journeys, the Honda e necessitates the presence of a home charger, which limits its potential customer base. I don’t have one because I don’t own an EV, but it was possible to run the cable through the window and charge it from a domestic socket. It’s not the fastest way of recharging, but it is an option.

If you’ve got a drive and can install a home charger, living with the Honda e will be straightforward. Honda estimates that the average commute in the UK is 23 miles and I don’t doubt that. It’s just you often take into consideration ‘what if’ scenarios when buying a car. The proliferation of SUVs is evidence of this – no one needs a chunky off-roader living in London (or 99.9% of the UK for that matter), but what if you need that option? You never will, but what if? It’s a successful selling point.

The Honda e limits your options, but in doing so, delivers a purer experience. What if you only need it to run the kids to school, get to work and do a bit of shopping? It fits seamlessly into that scenario.

On the practicality front, there’s enough space to keep everyone happy in the Honda e, given that you’re only going to be in it for 30mins tops. I ran it from Walton to Shalford to play cricket and got all my cricket gear in the boot and kept up with the traffic on the A3. It managed a trip to Portsmouth and back, too, although owing to a couple of broken public chargers, it limped into an A3 service station with 1% battery left. That wasn’t stressful at all, and there was absolutely no swearing in the car or at the broken chargers.

The adaptive cruise control and lane keep assist work brilliantly on dual carriageways and motorways. Some cars tend to be too fussy or require constant manual overriding (Tesla, I’m looking at you), but the Honda e just gets on with its work. And it’s easy to turn it off. Again, something not every manufacturer provides (Audi, I’m looking at you now).

It does flash at you quite often as it is very wary of rear ending whatever is in front, but it doesn’t emit a heart attack inducing bong married to a violent shake of the steering wheel. If you are going to crash, it will at least be a more relaxed process than might be the case elsewhere.

If you live in a town or city, there’s not much to dissuade you from having a serious look at the Honda e. If you have easy access to charging, then it’s brilliant. It’s surprisingly fun to drive and is incredibly accessible. The pleasant cabin is designed to be relaxed and unlike some EVs, the Honda e doesn’t try and compete with other cars that it is not.

It must have been tempting for Honda to get drawn into the EV acceleration battle and create something that could provide a viable, electric alternative to the Honda Civic Type R. Perhaps that’s on the roadmap for later.

For now, the Honda e is a gentle introduction for Honda into the world of EVs. It’s not designed to be racy or gimmick-laden, it’s designed to fit a lifestyle mandate and it achieves that perfectly. It’s not alone in the EV world in having range anxiety issues and a more limited scope of use than every internal combustion engine car, but as a glimpse into the future it’s quirky and good fun. There’s a simplicity to the experience that undoubtedly appeals, and the Honda e carries a distinct charm that’s hard not get drawn in by.