Zarah Sultana accused Boris Johnson and Priti Patel of "stoking the fire of racism" and "feigning outrage" in a Commons debate. 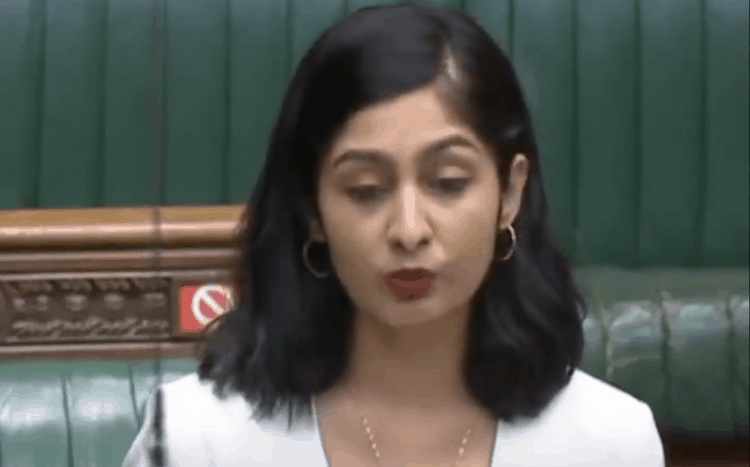 Labour MP Zarah Sultana was told to “lower the tone” and “stop shouting” by Home Office minister Victoria Atkins during a debate on racism in the House Of Commons.

The MP for Coventry South hit out at the government, referencing comments made by England defender Tyrone Mings. He accused Priti Patel, the home secretary, of having “stoke(d) the fire”, having previously refused to criticise fans who booed the team for taking the knee in protest against racism.

“You don’t get to stoke the fire at the beginning of the tournament by labelling our anti-racism message as ‘Gesture Politics’ and then pretend to be disgusted when the very thing we’re campaigning against happens,” he said.

Jumping on Mings’ comments, Sultana said: “Isn’t it the case that the home secretary and the prime minister were stoking the fire of racism, and only now, when the consequences are clear, are they feigning outrage?”

Sultana referenced a newspaper column written by the Boris Johnson in 2002, describing black people as “piccaninnies” with “watermelon smiles”.

She also mentioned that Johnson mocked Muslim women in newspaper columns as “letterboxes” and “bank-robbers” and that he refused to condemn the booing of England players taking the knee.

Sultana then suggested Priti Patel did not treat the England team taking the knee seriously.

But Home Office minister Victoria Atkins replied she was hoping to conduct her debate with Sultana “in a measured and collective way.”

“I don’t genuinely think the honourable lady is accusing either the prime minister of this country or indeed the home secretary of racism. That would be a truly extraordinary allegation to make,” Atkins said.

She added: “But I hope at some point we will be able to work together to tackle racism. That is what we all want to do. That is what the work of this government is directed towards.”

Atkins then added she hopes “we are able to just lower the tone a bit” and reinforced Sultana was “trying to shout at her”.

Sultana later highlighted on Twitter that she was the only person of colour to down to speak and yet she was told to lower her voice.

Boris Johnson and Priti Patel gave a green light to the racism our England stars are facing. They stoked this abuse.

Now they’re feigning outrage. None of us are fooled. pic.twitter.com/avRApTpAzK