He said the launch of the channel could not be described as a “startling success” and that he felt he was in a “minority of one” about its future. 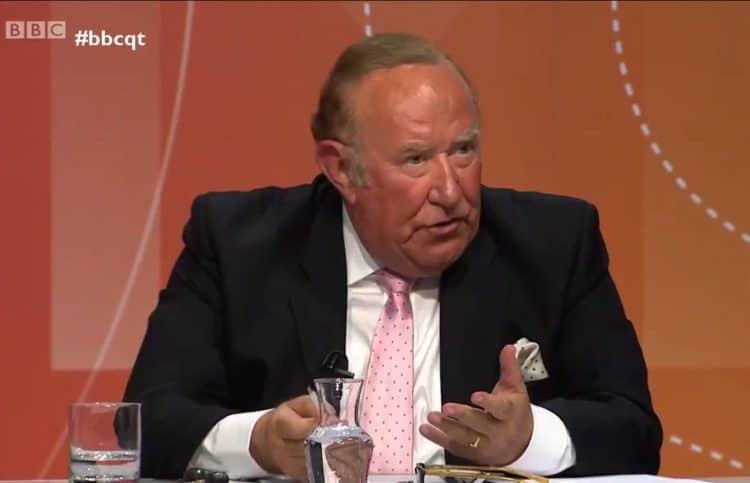 Andrew Neil said he stepped down as chairman of GB News after differences over the direction in which the channel was heading.

The journalist and broadcaster, 72, appeared on BBC’s Question Time days after announcing his departure from the fledgling channel in a tweet where he said it was “time to reduce my commitments on a number of fronts”.

GB News launched in June with Neil saying it would not “slavishly follow the existing news agenda”, would cover “the stories that matter to you and those that have been neglected” and deliver “a huge range of voices that reflect the views and values of our United Kingdom”.

Neil told Question Time the launch of the channel could not be described as a “startling success” and that he felt he was in a “minority of one” about its future.

“More and more differences emerged between myself and the other senior managers and the board of GB News,” he said.

“Rather than these differences narrowing, they got wider and wider and I felt it was best that if that’s the route they wanted to take then that’s up to them, it’s their money.

“The route is what I think you can see on GB News at the moment, people should make up their own minds what they want to watch.”

Guto Harri quit the channel following a row over him taking the knee during a debate on the racism directed towards England football players, while other staff members have reportedly left.

Neil said: “I thought it wasn’t for me, I had wanted a different route – it doesn’t mean that I’m right or they’re wrong but it certainly was a difference.

“I was in a minority of one”

“But I was in a minority of one, so it’s doing what it’s doing and it’s up to them. Good luck to them if that’s what they want to do.”

After Neil’s announcement on Monday, a statement from GB News said: “Andrew is without doubt one of the finest journalists and interviewers in this country.

“GB News thanks him for his 12 months of leadership, wisdom and advice and we wish him well.”

Related: Plans to bring back imperial measures take a pounding on social media