If successful there might be a second vessel called 'The Galloping Grimes' or 'The Hovering Hopkins'. 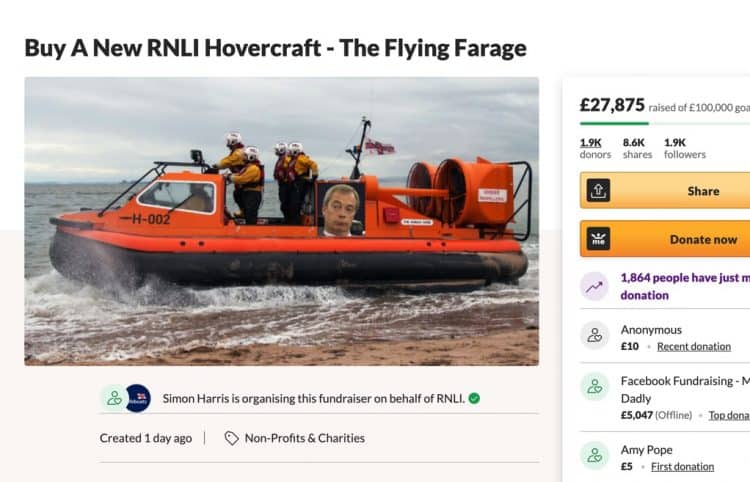 A crowdfunding campaign to buy a new hovercraft for the RNLI nicknamed ‘The Flying Farage’ is approaching £30,000.

Simon Harris started the campaign, saying he believed it to be “incredibly appropriate” to buy such a vessel given that the former UKIPer was taking “such an active interest in the RNLI’s activities right now”.

He added that, if successful, he might even buy a second vessel and call it ‘The Galloping Grimes’ or ‘The Hovering Hopkins’.

At the time of writing donations had surged to £27,875 and showed no sign of slowing down.

It comes as donations to the lifesaving charity rocketed over the past week after its chief executive this week described its role in rescuing people crossing the English Channel as “humanitarian work”.

Nigel Farage – the former UKIP leader – had criticised the charity, claiming it was being used as a “taxi service for illegal trafficking gangs”.

“We have seen an uplift in donations, with over £200,000 being donated yesterday alone through a combination of one-off donations, new regular support and supporters increasing their regular donation amount. This is simply incredible.”

The head of the RNLI, Mark Dowie, insisted the sea charity was “doing the right thing” by going to people’s aid, regardless of their reason for being in the water.

He said: “The people of these islands fundamentally are decent people, and all decent people will see this as humanitarian work of the highest order.