The chain said food and drink will be cheaper than in many supermarkets thanks to the Eat Out to Help Out scheme. 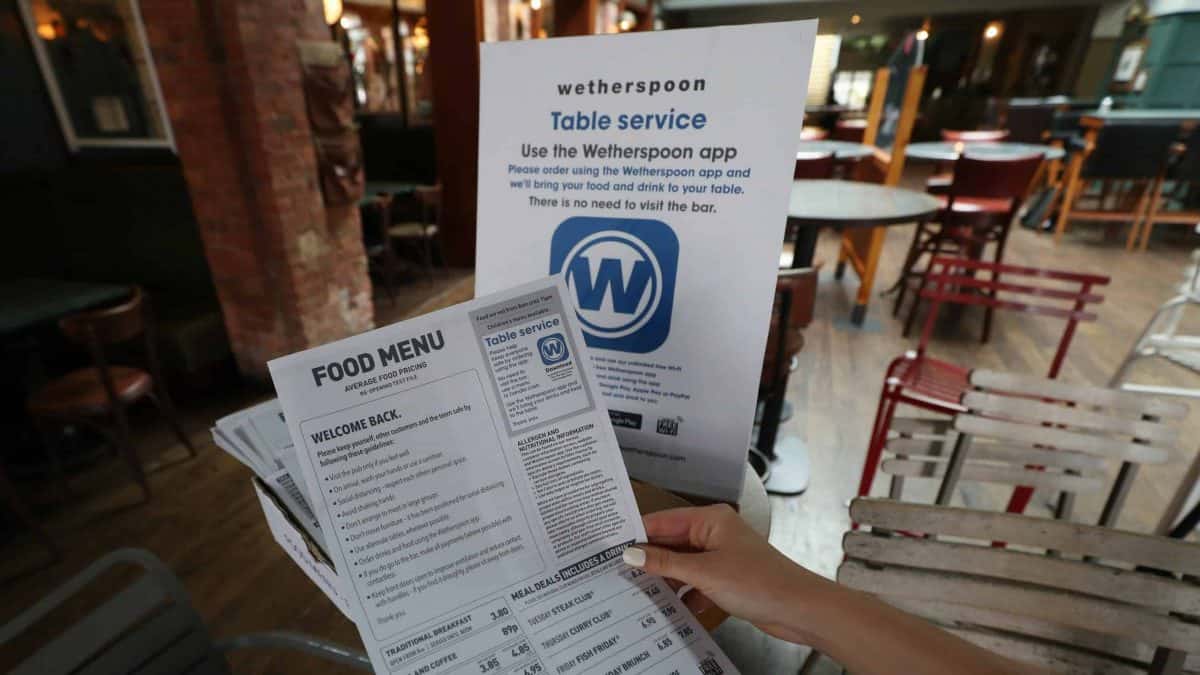 Wetherspoons has announced that all its pubs will be taking part in the Government scheme to encourage people to eat out in a bid to boost the economic recovery from the virus crisis.

The company said hundreds of its outlets across the UK will be offering a selection of meals, with a drink, at a lower price than buying from most supermarkets.

Under the Eat Out to Help Out scheme, a 50 per cent discount will be available at participating restaurants and pubs on Mondays, Tuesdays and Wednesdays throughout August, to a maximum of £10 per head.

The prices will be lower than comparable food bought at most supermarkets such as Tesco, it said.

Ironically, when the pandemic first hit and the pub chain was forced to close its doors that is precisely where Tim Martin told its seemingly abandoned staff to go work.

Addressing staff by video, he said:

“I know that all our trade now has gone to supermarkets. Not only our trade, but the trade from cafés, leisure centres, restaurants etc.

“So we have had lots of calls from supermarkets, Tesco alone want 20,000 people to join them. That’s half the amount of people who work in our pubs.”

The hashtag #boycottweatherspoons was trending on Twitter soon after.

“One thing #COVID19 has made abundantly clear is who the total bastards are. We need a political system that ensures the likes of Mike Ashley, Tim Martin and Richard Branson are never allowed to dominate our lives again.”

One thing #COVID19 has made abundantly clear is who the total bastards are. We need a political system that ensures the likes of Mike Ashley, Tim Martin and Richard Branson are never allowed to dominate our lives again. pic.twitter.com/7mRGRMmoUr

Wetherspoons was also called out for threatening not to pay its suppliers until pubs reopen.

An email signed by chairman Tim Martin set out the company’s position, saying:

“We are asking for a moratorium on payments, until the pubs reopen, at which point we intend to clear outstanding payments, within a short timeframe.

“We understand that this puts significant pressure on our suppliers, but we are kindly asking for your assistance during this very difficult period.

“A number of our suppliers have already offered assistance and we would be most grateful for your cooperation as well.”