A Europhile academic declared his home an independent Republic in a bid to avoid Brexit, recreating Ealing comedy ‘Passport to Pimlico’. Dr William Riches, 77, made his wife the President and gave his children and grandchildren citizenship of the Independent Republic of Middlewatch – the name of his house – so they do not need […] 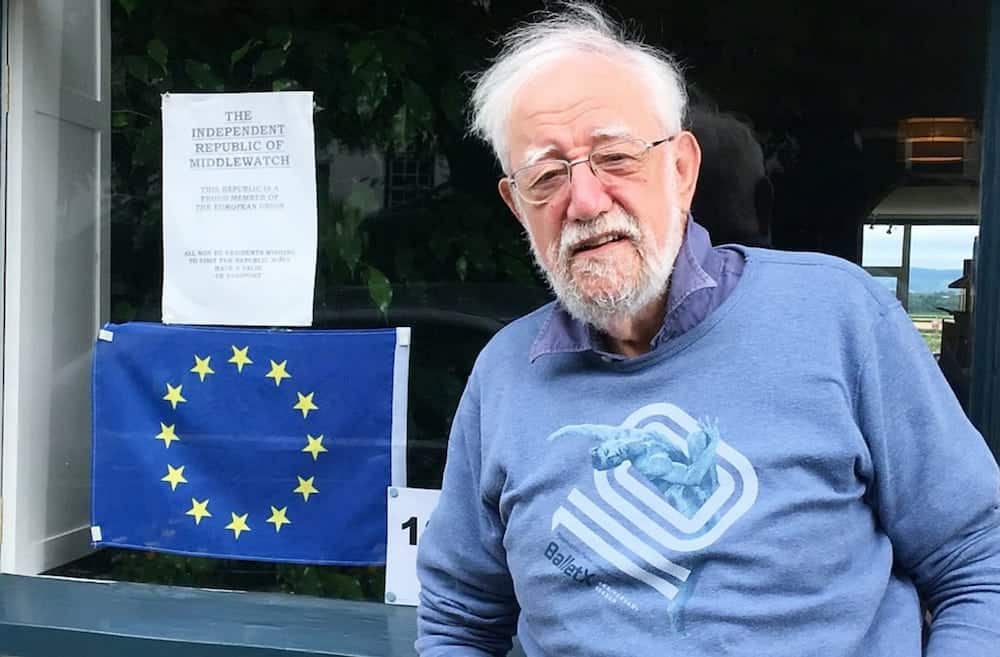 A Europhile academic declared his home an independent Republic in a bid to avoid Brexit, recreating Ealing comedy ‘Passport to Pimlico’.

Dr William Riches, 77, made his wife the President and gave his children and grandchildren citizenship of the Independent Republic of Middlewatch – the name of his house – so they do not need passports to cross the threshold.

However, when Britain does leave the European Union visitors will require a visa costing at least £50 to enter the three-storey house.

A poster in his window reads ‘The Independent Republic of Middlewatch. This Republic is a proud member of the European Union.

‘All non-EU residents wishing to visit the Republic must have a valid UK passport.’

It has echoes of the Ealing comedy ‘Passport to Pimlico’, a post-war film about residents of a London neighbourhood which declares itself a republic so it can avoid the strict rationing and other post war restrictions in force in the rest of the UK.

The former university professor believes England will be relegating itself to just a “little island” when Article 50 is triggered.

A poster in his window reads ‘The Independent Republic of Middlewatch. This Republic is a proud member of the European Union.

‘All non-EU residents wishing to visit the Republic must have a valid UK passport.’

Dr Riches said: “I am a staunch Remainer and cannot see a future for this country now.

“All our literature, all our art, all our culture, all our history is intertwined with Europe so the idea that we are not part of Europe, that we are some small but significant little island, just annoyed me so much I had to do something.

“I was so mad after the vote to leave that I decided to put the signs up and declare my home an independent republic.

“I feel very strongly that the wishes of the 48 per cent of us who voted Remain are being totally ignored so this is the only way I have left to protest.

“If I could declare us a republic and join Europe I probably would. Maybe I’ll look into it.”

He took on the role of Vice President of the Republic, and the family have international links with his son holding Irish and German citizenship and his daughter living in America.

His house in Newnham, Glos, overlooks the Bristol Channel.

Dr Riches and his wife fear it is their grandchildren’s generation who will suffer from Brexit.

They even put a notice in the window before the vote imploring older people to consider the wishes of the majority of the 18-35-year-olds who wanted to remain in Europe.

He said: “I don’t understand why the older generation voted against their children.

“And I’d bet that the majority of people in England, Ireland, Scotland and Wales would not be able to pass the citizenship exam that people have to take now.”

Judith said: “I think it’s about time older people got their heads out of the clouds and recognised that the world doesn’t go backwards, that things will never go back to the way they were when they were young.

“We were born before the war, it’s not our time any more. It will take ten years so many of us will probably be dead before it happens.

“I don’t think the notice will change any minds because our friends and neighbours voted remain anyway, but it’s our way of making a protest and people who come here often apologise for not bringing their passports.”