The academic was branded a “rape apologist” a “scumbag” and a “crusty old man.” 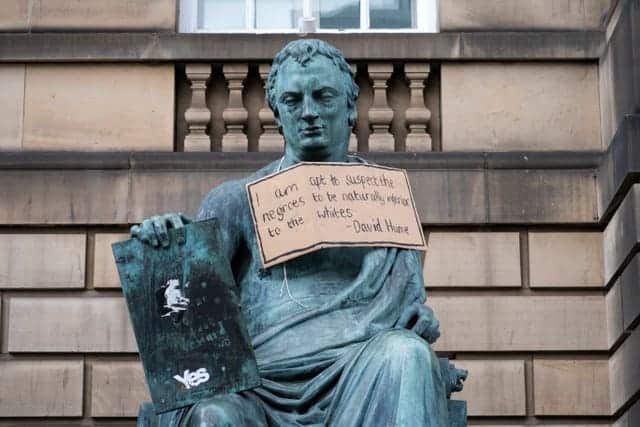 An academic investigated by the University of Edinburgh after objecting to calls to rename the ‘racist’ David Hume Tower was cleared of wrongdoing.

Social Anthropology academic Dr Neil Thin, 60, was branded a “rape apologist” a “scumbag” and a “crusty old man” in online comments after making his views public.

Along with other academics he objected to it being renamed 40 George Square last year in response to the Black Lives Matter movement.

The tower was originally named after the Scottish Enlightenment philosopher David Hume, who was an alumnus of the university.

In a footnote Hume provided for his essay, ‘Of National Characters’ in 1753, he wrote that negroes were a “naturally inferior” race.

Dr Thin was one of a group of academics who objected to the rebranding, in a letter which said the move was “simplistic” and “not appropriate for a serious university.”

Students claimed he had discriminatory views and also claimed he penalised those who challenged his views, allegedly circulating an online form to encourage other students to speak out about the lecturer.

The university has confirmed that the complaints had not been upheld, saying that it had a “responsibility” to investigate any complaints.

Dr Thin stopped teaching for eight weeks and said his reputation had been damaged.

Some of the students who posted on social media about Dr Thin were also investigated, but the complaints were also not upheld.

Dr Thin said: “The university’s formal investigation into two complaint emails from students about me has after eight weeks concluded that the two allegations (offensive tweets and biased marking) must be dismissed.

“This is what I expected, but of course, it doesn’t immediately undo the massive damage to my reputation and to public trust in the university.

“It also still leaves unchallenged the defamatory online attacks which triggered the investigation.”

He added: “I agree with the findings of the investigation and will find its recommendations useful even though I’m not allowed to discuss specific contents.”

In it, they wrote that retaining the name of David Hume was an “educational opportunity”.

The letter said: “No one is above criticism, and critical engagement with his ideas is entirely appropriate, but we should engage with figures like this in the round, not by focusing narrowly on the flaws.

“Hume’s views on race, which as many have said were common in his day, were nonetheless marginal to his body of ideas.

“No one would object to a public statement, such as signage on the building in question, recognising and criticising Hume’s racist views.

A statement from the university said: “While it is not appropriate for us to comment on specific details, we can confirm the complaints have not been upheld.

“When complaints are made, we have a responsibility to consider them seriously and if taken forward through our complaints process, to ensure all parties are heard and receive support.”