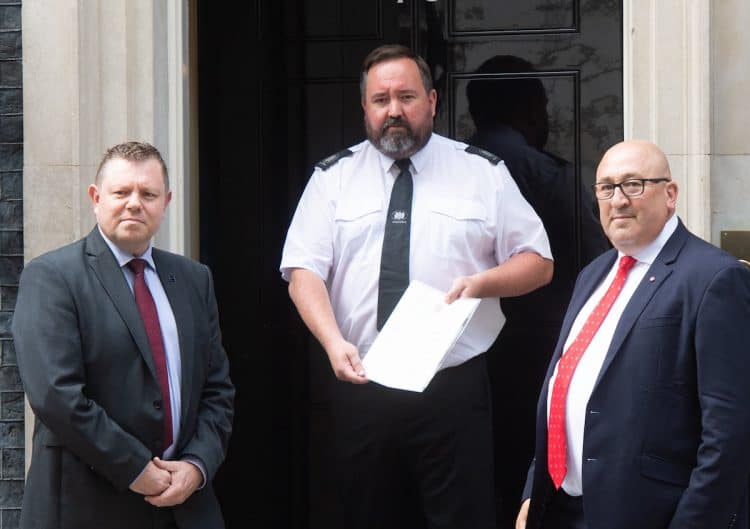 John Apter from Police Federation and Ken Marsh from the Met Federation. Credit;SWNS

Angry rank and file police officers handed in a demand to Downing Street for a pay rise – and branded the Government’s law and order plans “full of holes.”

A van drove around Westminster with a picture of the Home Secretary alongside the slogan: “No covid vaccine. No police pay rise No confidence in Priti Patel.”

Ken Marsh, Met Police Federation chairman speaking at Downing Street, said: “A real concern for me about the plan the Prime Minister set out today is that it’s destined to fail and as always we’ll be blamed for it.

“Because police officers are in a unique position where we serve the Crown, we don’t have contracts of employment so we’re limited in what we can do. That’s why we’re asking for the pay mechanism to be revised.

“We use to have a thing called the X-factor which meant we were remunerated with inflation – but we’ve only had six per cent in 10 years, that’s 22 per cent less than where we should be.

John Apter, chair of the National Police Federation, said: “We’ve come to Downing Street today to hand in a letter highlighting our disgust and frustration.

“I’m still trying to digest the governments plan really, and I think it’s full of holes and gimmicks.

“It’s not going to cut the mustard with our members.

“When someone pats you on the head and nothing comes from it, you have to ask yourself…recompense us correctly that’s all we’re asking for.

“In the letter, there are three things that we asking for.

“That a new paid mechanism is put in place which is fit for purpose.

“And thirdly to review the PM’s decision to give 0 per cent pay increase our 130,000 members.

“There have been some things, but during the pandemic ministers have been talking about all the great things the police have done.”

Rachel Carne, 52, a PCSO from Bedfordshire, said: “It’s absolutely shocking really that police officers go out and risk their lives every day and haven’t been given a pay rise.

“It makes us feel as if we’re not really being valued and it’s really disappointing.

“You know during the pandemic we received no training so we were walking into this blind and had to learn on the job.

She added: “I think the pandemic has made us out to be party poopers, so I think people have become more hostile towards the police.

“I think our pay should definitely be kept at minimum in line with inflation.”