“The barracks are now a byword for the cruel injustice of the Government’s attempts to shirk responsibility for providing a fair, humane and properly-run asylum system.” 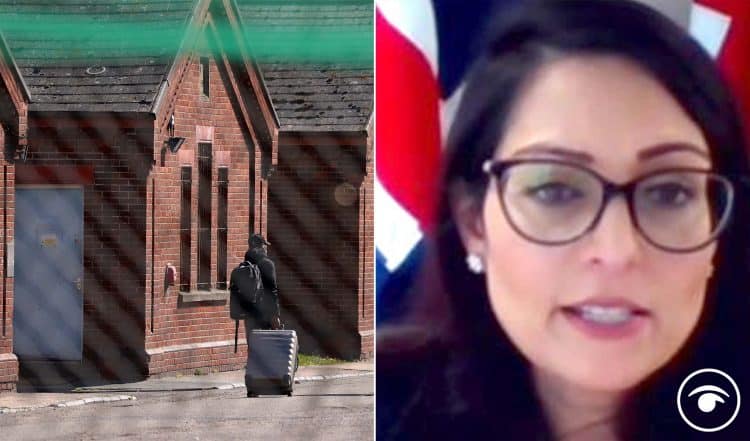 Continued use of a “squalid” military barracks to house asylum seekers “beggars belief” and must end, charities say.

The past year has seen two outbreaks of coronavirus behind the barbed wire fences of Napier Barracks in Kent, and part of the site was branded “unfit for habitation”.

The first asylum seekers were moved onto the site on September 21, 2020, but the barracks is still being used 12 months on.

Dating back more than 130 years, the ageing military site was loaned to the Home Office for emergency use last year amid rising numbers of people crossing the English Channel in small boats.

Despite continued outcry from charities and refugee organisations, the Government announced last month that Napier Barracks could be used for accommodation until as late as 2025.

The Home Office continues to insist that the barracks in Folkestone is suitable and repeated its claim that to suggest it is not good enough “is an insult”.

The year anniversary of the site’s use for asylum seeker accommodation on Tuesday comes as record numbers of people continue to risk their lives crossing the Dover Strait from France.

But despite the sharp rise in small boats arrivals on the south coast last year, asylum applications in the UK fell in 2020.

Looking back at the past 12 months of Napier Barracks, Steve Valdez-Symonds, Amnesty International UK’s Refugee and Migrant Rights director, said: “Over the past year, the squalid detention-like conditions at Napier Barracks have spread Covid-19, renewed or exacerbated psychological traumas and generally punished people for doing no more than exercise their right to seek asylum in the UK.

“The barracks are now a byword for the cruel injustice of the Government’s attempts to shirk responsibility for providing a fair, humane and properly-run asylum system.”

Earlier this year, almost 200 people at Napier Barracks contracted coronavirus, leading to accusations that health advice had been ignored.

The dormitory-style accommodation at the site has been repeatedly criticised amid fears over virus transmission and social distancing.

Mr Valdez-Symonds added: “Recent events in Afghanistan have been a distressing reminder of the extreme dangers that drive refugees to seek a place of safety, yet the Government is shamelessly trying to criminalise and punish refugees not protect them.

“Anyone who stands for humanity and human rights ought to oppose the disgraceful use of Napier and the wider oppressive asylum policy of which it’s so dismally emblematic.”

Tim Naor Hilton, chief executive of Refugee Action, said: “It beggars belief that after a year and two Covid outbreaks, refugees are still being cramped into decrepit buildings behind high fences and barbed wire.

“The barracks must be closed, people rehomed in our communities, and the Government tear up plans outlined in its anti-refugee Bill to copy Napier and house people in ‘detention-lite’ reception centres.”

A Home Office spokesperson said the “unprecedented and unacceptable rise” in small boat crossings and the Covid-19 pandemic “continue to put pressure on our asylum system”.

They added: “As we work to reform the broken asylum system, we must ensure we have sufficient capacity to meet our statutory duty to provide support to genuine and destitute asylum seekers.”

The Home Office spokesperson repeated their frequent assertion that Napier Barracks was previously used to house military personnel and “to suggest they are not good enough for asylum seekers is an insult”.

“The New Plan for Immigration provides the only long term solution to fix the broken system, which includes changes to the law to tackle criminal gangs and prevent further loss of life,” they added.