Remi, who spent part of her childhood in Kenya, has overcome hardship of her own as a former victim of domestic abuse after being hounded by her former boyfriend. 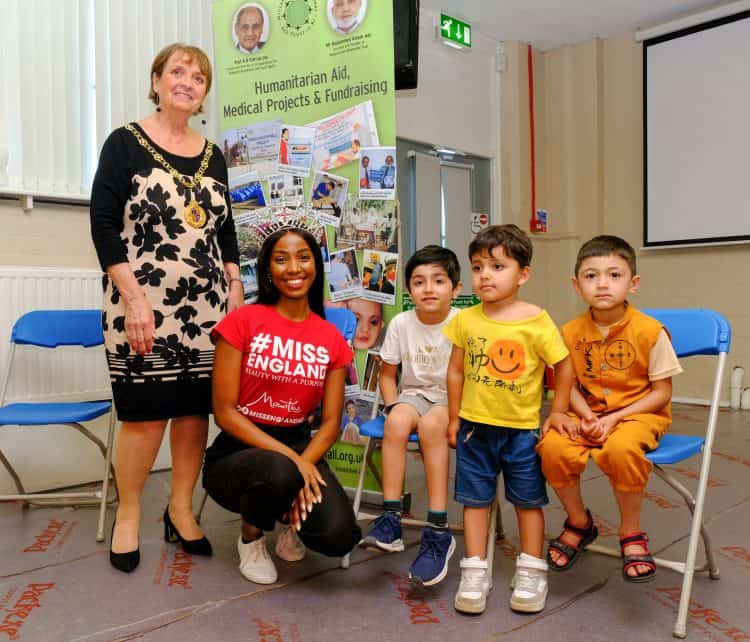 The newly-crowned Miss England has met with Afghan refugees fleeing the Taliban to help distribute food and aid as they arrive in Britain to start a new life.

Rehema “Remi” Muthamia, 25, welcomed families escaping a regime that oppresses women while representing a competition that has been celebrating them since 1928.

She was making her first public appearance in Walsall, West Mids., since clinching the Miss England title two weeks ago.

The health technology consultant, from north west London, said: “I was delighted to be invited to the launch of such a worthy humanitarian effort.

“As soon as I heard what the charity was doing I knew I wanted to support it as so many frightened people are being evacuated from Afghanistan right now.

“These refugees have been forced to flee through no choice or fault of their own and move countries which must be pretty daunting, especially for young children.

“They have to acclimatise to a new country and learn a new language and you can’t fathom what some of these people have been through to get here.

“I wanted to do what I can to help them start a new life for themselves here in Britain and so many are grateful to be granted refugee status.

“I heard so many traumatic stories of what these people have suffered and the plight of the unfortunate is at the heart of the ethos of the Miss England pageant.”

They will be distributed to refugees arriving in the UK from Afghanistan as they settle in the West Midlands area.

Remi added: “Professor Gatrad is doing a wonderful job in bringing communities together not only here in the UK but worldwide.”

Prof Gatrad said: “What we are doing is supporting local and government efforts to help those who helped us in Afghanistan.

“I would like to thank members of the local police, Walsall Council and various sections of the community who helped us unload 30 pallets from a double decker truck, demonstrating community cohesion in action”

Remi, who spent part of her childhood in Kenya, has overcome hardship of her own as a former victim of domestic abuse after being hounded by her former boyfriend.

During her acceptance speech she vowed to use her high profile new role to help others including women who are trapped in abusive relationships.

She will now represent England at the 70th Miss World in Puerto Rico later this year.