A ‘satirist’s dream’: Express journalists walk out on strike

A few weeks ago the right-wing newspaper hit out at "MILITANT unions" for holding the country to ransom! 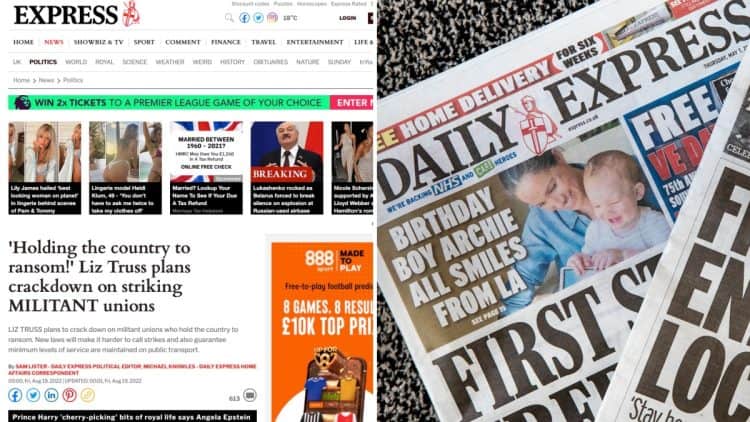 Daily Express journalists have thrown their weight behind ‘militant trade unions’ after they walked out on strike over a pay dispute.

The newspaper will join sister outlets the Daily Mirror, the Daily Star and dozens of local newspapers in striking on Friday.

It marks the start of a month of industrial action designed to disrupt production at the news outlets, which are all owned by publishing giant Reach.

One journalist at the titles acknowledged that a rightwing anti-union newspaper going on strike is a “satirist’s dream”, they insisted there is solidarity between unionised staff across all of Reach’s titles, regardless of their political stance.

Members of the National Union of Journalists voted to go on strike after rejecting bosses’ offer of a 3 per cent pay rise as not enough to cope with the cost of living crisis.

Reach chief executive Jim Mullen took home £4 million last year, while many of his journalists say they are struggling financially.

Starting salaries for reporters on Reach’s national newspapers are about £22,000 – well below the median average British salary for jobs that often require extensive training and experience.

Regional newspaper journalists can earn under £20,000, with many now facing increased energy bills due to a permanent shift to home working.

Matt Capon, an organiser for the Mirror branch of the NUJ, said: “Our members are focused and clear on what they want – a dialogue with the company to make them understand that the cost of living is an issue that affects everyone, including journalists.”