They were hunting a possible massive planet beyond Pluto when they stumbled upon the mysterious satellites - one of which has been described as an "oddball". 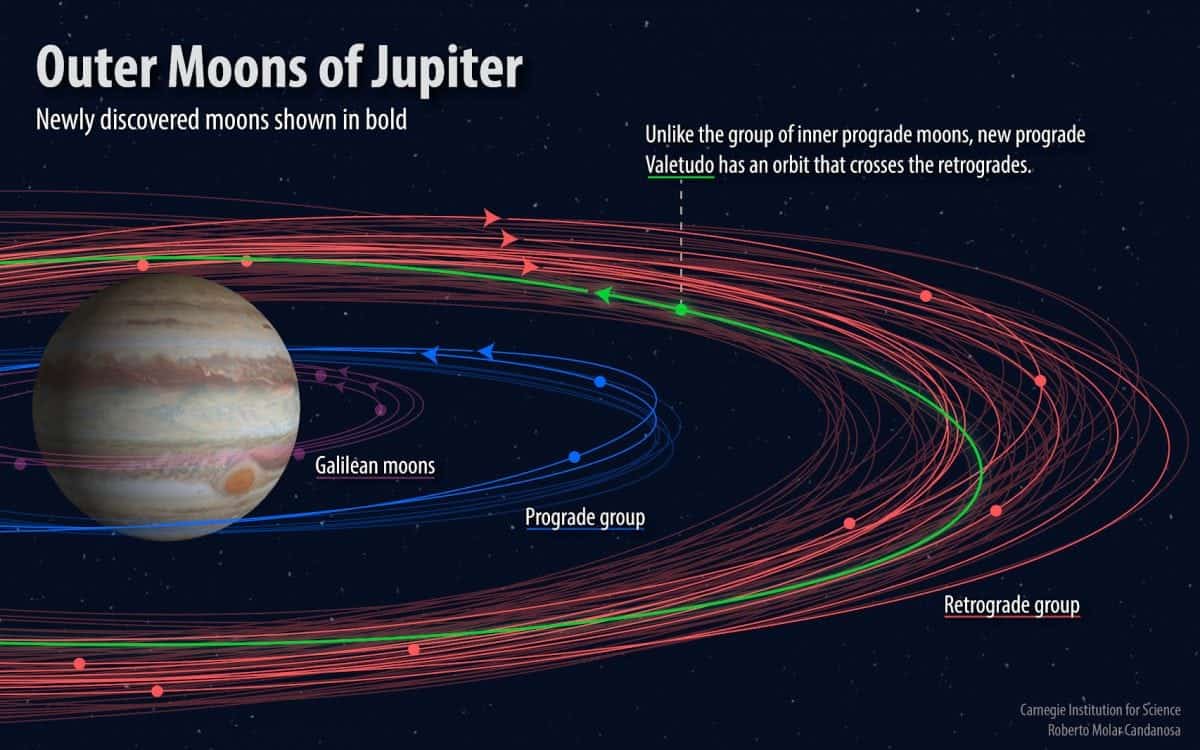 A dozen new moons orbiting Jupiter have been discovered by astronomers… by mistake.

They were hunting a possible massive planet beyond Pluto when they stumbled upon the mysterious satellites – one of which has been described as an “oddball”.

It has such a unique orbit it is at risk of smashing into the others – causing a cosmic collision that will grind them to dust.

The remarkable chance find brings the gas giant’s tally of moons to a whopping 79 compared with 62 for Saturn, the planet with the second most.

Team leader Dr Scott Sheppard, of the Carnegie Institution for Science, Washington DC, said: “Jupiter just happened to be in the sky near the search fields where we were looking for extremely distant Solar System objects.

“So we were serendipitously able to look for new moons around Jupiter while at the same time looking for planets at the fringes of our Solar System.”

All less than two miles wide, the moons are all very small which is why they have only now been identified thanks to more sensitive telescopes.

Eleven are “normal” moons, with nine of them part of a distant outer swarm that orbit in the retrograde, meaning they move in the opposite direction to Jupiter’s spin.

They are thought to be the remnants of three once larger moons that broke apart during collisions with asteroids, comets or other moons. They take about two years to go round the planet.

The two others are among a closer, inner group that orbit in the prograde, or same direction. They are also believed to be fragments of a larger moon that was broken apart and take just under a year to circle Jupiter.

Explained Dr Sheppard: “Our other discovery is a real oddball and has an orbit like no other known Jovian moon.

“It is also likely Jupiter’s smallest known moon, being less than one kilometer in diameter.”

It is further away than the prograde moons, taking about one and a half years to orbit the planet. This means, unlike the closer in moons, it crosses the outer retrograde moons.

As a result, head on collisions are much more likely to occur between this “oddball” prograde moon and its retrograde cousins moving in opposite directions.

Dr Sheppard said: “This is an unstable situation. Head-on collisions would quickly break apart and grind the objects down to dust.”

It is possible the various orbital moon groupings we see today were formed in the distant past through this exact mechanism.

The team suspect the “oddball” is the last-remaining remnant of a once-larger prograde moon that formed some of the retrogrades during past head-on collisions.

The name Valetudo has been proposed for it, after the Roman god Jupiter’s great-granddaughter, the goddess of health and hygiene. 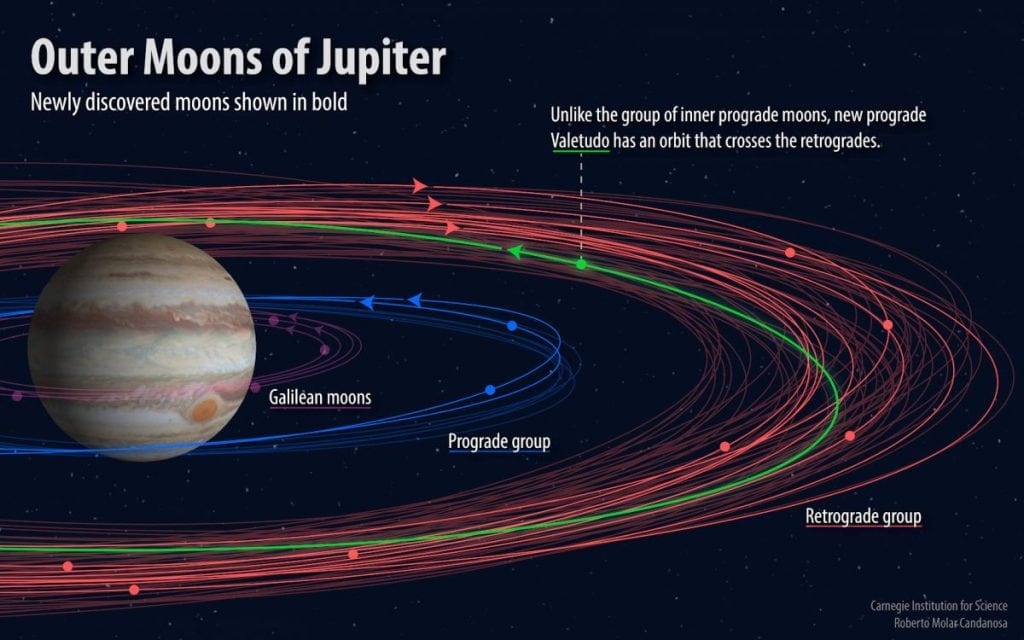 Elucidating the complex influences that shaped a moon’s orbital history can teach scientists about our Solar System’s early years.

For example, the discovery that the smallest moons in Jupiter’s various orbital groups are still abundant suggests the collisions that created them occurred after the era of planet formation.

This was at a time when the Sun was still surrounded by a rotating disc of gas and dust from which the planets were born.

Due to their sizes – just one to three kilometers (0.62 to 1.9 miles) in diameter – these moons are more influenced by surrounding gas and dust.

If these raw materials had still been present when Jupiter’s first moons collided to form its current clusters, the drag exerted on the smaller ones would have made them spiral inwards. So they were likely formed after they had dissipated.

Dr Sheppard and colleagues first spotted the moons in spring last year while they were looking for very distant Solar System objects as part of the search for the suspected planet on the fringes.

In 2014, the same team was the first to realise it could explain the similarity of the orbits of several small extremely distant objects. This assumed planet is now sometimes popularly called Planet X or Planet Nine. 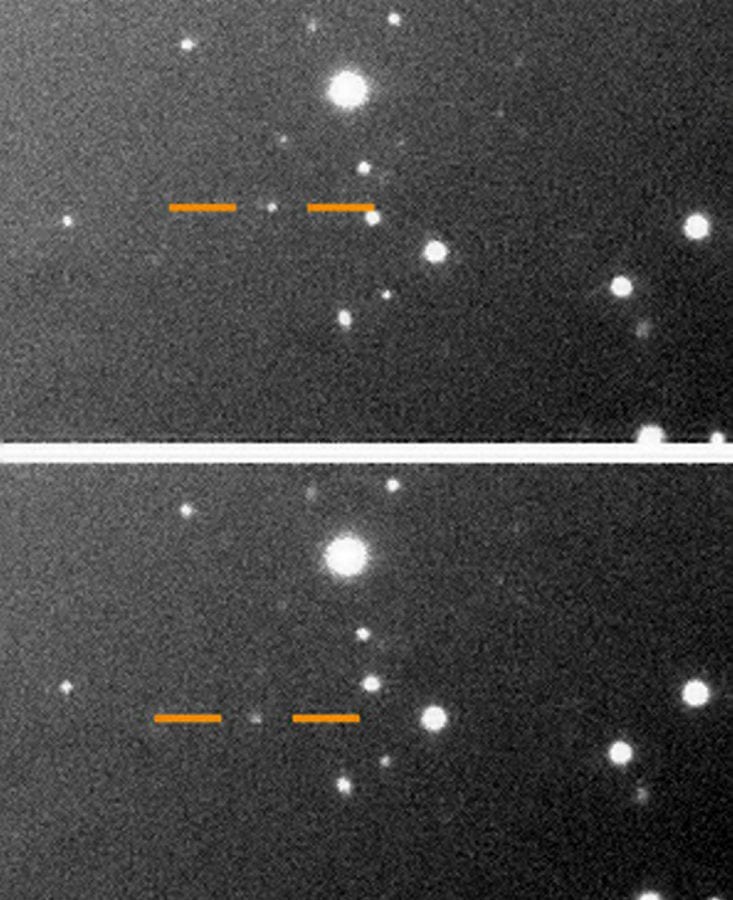 He said: “It takes several observations to confirm an object actually orbits around Jupiter. So, the whole process took a year.”

The initial discovery of most of the new moons were made on the Blanco 4-meter telescope at Cerro Tololo Inter-American in Chile and operated by the National Optical Astronomical Observatory of the United States.

The telescope recently was upgraded with the Dark Energy Camera, making it a powerful tool for surveying the night sky for faint objects.

Several other telescopes were used to confirm the finds, including the 6.5-meter Magellan telescope at Carnegie’s Las Campanas Observatory, also in Chile.