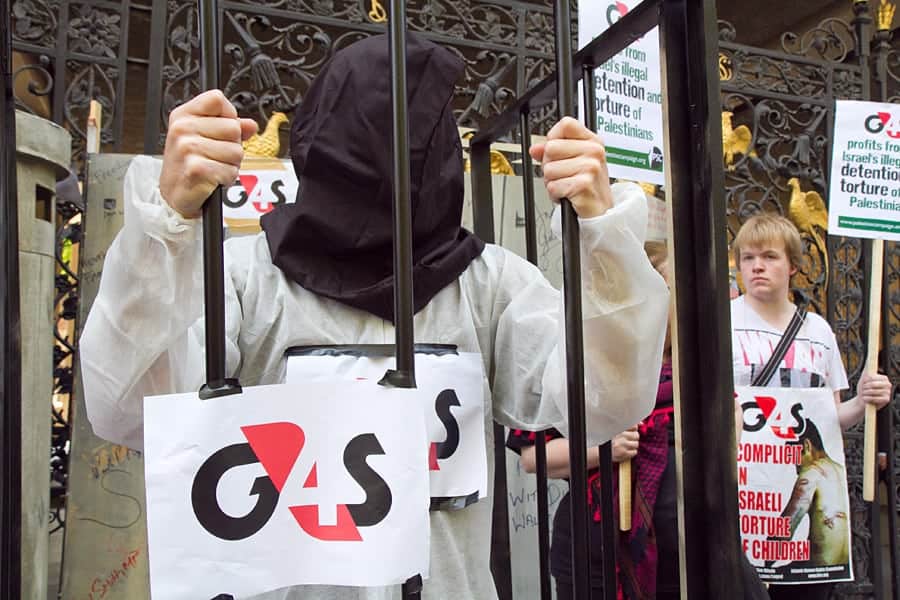 Tonight BBC Panorama reveals footage of a detainee being choked by a member of staff at a G4S run Immigration Removal Centre. The incident is part of a culture of abuse captured by undercover filming, along with widespread self-harm, and attempted suicides by detainees.

The undercover filming was carried out by a member of staff, a detainee custody officer whose concern about what was happening led him to contact Panorama and become a whistle blower, and then to wear a secret camera as an undercover reporter.

Until earlier this summer twenty-one-year old Callum Tulley was employed by G4S at Brook House Immigration Removal Centre near Gatwick Airport. For over a year he had collected evidence, which he provided to Panorama, before agreeing to wear secret cameras.

The Panorama programme also reveals that G4S management were warned three years ago about a group of officers mistreating detainees at Brook House.

Another whistle-blower – a former senior G4S manager – Nathan Ward has told Panorama that he warned the managing director for G4S detention services three years ago about the behaviour of some staff at Brook House.

“The vast of majority were good decent people but there was a group that actually concerned me on their relationship with detainees it was around language that they used, a sense of roughness and the use of force, how force was used.”

G4S has been paid more than 100 million pounds by the Home Office to run the centre since it opened in 2009.

In addition to abuse by officers, the Panorama footage reveals that drugs, particularly the powerful psychoactive substance ‘spice’, are rife inside the centre.

· Custody officers abusing detainees, some of them with mental health problems.
· Widespread self-harm with some detainees attempting suicide.
· G4S staff mocking detainees who were receiving urgent medical treatment after self-harming or taking drugs. In the last year alone there were 53 cases of detainees needing medical treatment for self-harm at Brook House. There were another 451 cases where detainees were judged to be at risk of hurting themselves. There were also 316 cases of refusing food recorded*.

Brook House is built like a prison and holds up to 508 male detainees. It was originally designed to hold people for just 72 hours, but some have been held for months, even years. Detainees are sent there by the Home Office. They include foreign nationals who have completed prison sentences and who are being returned to their home countries, and also asylum-seekers, and people who have overstayed visas. The UK is the only country in the European Union which doesn’t put a specific time limit on immigration detention.

During one incident captured on film, a detainee was self-harming, by trying to self-strangulate and putting a mobile phone battery in his mouth. A detainee custody manager who was on the scene said:

“Plug him in and he’ll be a Duracell bunny”

“…basically stuck both of his fingers into his neck, and he was pushing so, so hard I could hear the detainee trying to gasp for breath. I actually thought he was going kill him and I said easy, easy.”

During another incident when a detainee had taken Spice, the same detainee custody manager was filmed saying:

“Does your face taste nice? Because you appear to be chewing it off.”

“Fucking leave him. A bucket of cold water. That’ll sort his heart rate out. That would do it the world of good.”

Another detainee custody officer was filmed openly confessing to assaulting a detainee by banging his head and bending his fingers back, in front of officers. Callum said:

“…it’s so common place that it doesn’t get challenged no one really bats an eyelid.”

In another example of staff not following correct procedure at Brook House, the same detainee custody manager tells Callum to record a detainee as having eaten when actually he’s refused food.
The manager tells our undercover reporter:

Professor Cornelius Katona, the clinical lead for the Royal College of Psychiatrists on the mental health of asylum seekers and refugees told Panorama:

“The recording of food refusal ought to be the start of finding out a bit more. It’s extremely serious because food refusal may be indicative of poor mental health, it may cause deteriorating physical health in extreme form it can even be fatal.”

Evidence of a child being detained

Callum Tulley also filmed a new arrival who some officers believed was forced to test a batch of spice, by his room-mate. Callum was told that the detainee’s passport said he was 18, but the detainee himself said he was 14. G4S guidelines say the company’s Duty Director and the Home Office must be told by staff if a detainee claims to be under 18. It took nearly two weeks before the boy was removed into the care of social services.

The Home Office later told Panorama his age is in dispute, so policy on handling these cases has not been breached.

G4S says it can’t comment on specific cases but any age concerns are raised with the Home Office and social services.

Panorama showed the footage to the former senior manager Nathan Ward who has written G4S guidelines on how to deal with detainees suspected of being under-18.

“You’ve got hard line criminals who have committed some really serious offences. You’ve got people in there, who have come over from places like Sudan, Syria and Eritrea who are seeking asylum in the country.”

“The contrast between the asylum seekers and the migrants to the hard line criminals, they do swarm like sharks around, around small fish. They will just get eaten alive, just snapped up like that.”

Alif Jan was a doctor in Pakistan and was working as a trainee audiologist at a hospital in London. He has been detained three times after his student visa ran out. He’s now living in Birmingham and applying for asylum. He said of his detention at Brook House:

“In Brook House you can be put with any criminal in the same room. Guys were like fighting with each other, banging their doors, screaming, shouting and swearing.”

“On the first night, it feels like someone is coming to kill me. I couldn’t sleep, my sleep was disturbed throughout the night. “

Reaction to the investigation

After Panorama contacted G4S, it said, once it has seen the evidence it will take “appropriate action.”

It says any such “behaviour is not representative of the many G4S colleagues who do a great job often in difficult and challenging circumstances.”

And that it investigates all complaints and has confidential whistleblowing channels for staff and detainees.

The Home Office said the dignity and safety of those in its care is of the utmost importance and that it regularly and closely monitors Brook House. It also said, “The detention of people without the right to remain in the UK who have refused to leave voluntarily is key to maintaining an effective immigration system.” The Home Office has already ordered a review into the welfare of detainees in immigration detention.

“I recommended when anyone was sentenced to be deported that that deportation should be processed while they were in prison so that at the end their prison sentence they were taken straight to the airport and out. It could be done if ministers willed it to be done. It’s common sense.”

Panorama Undercover: Britain’s Immigration Secrets will be broadcast tonight at 9pm on BBC One