A young MS sufferer has slammed Primark staff after she was left stranded during an emergency evacuation – because she was in a wheelchair. Wheelchair user Alicia Thain, 21, was terrified after she was left on the first floor of the store while fire alarms went off and other shoppers fled. Panicked customers quickly left […] 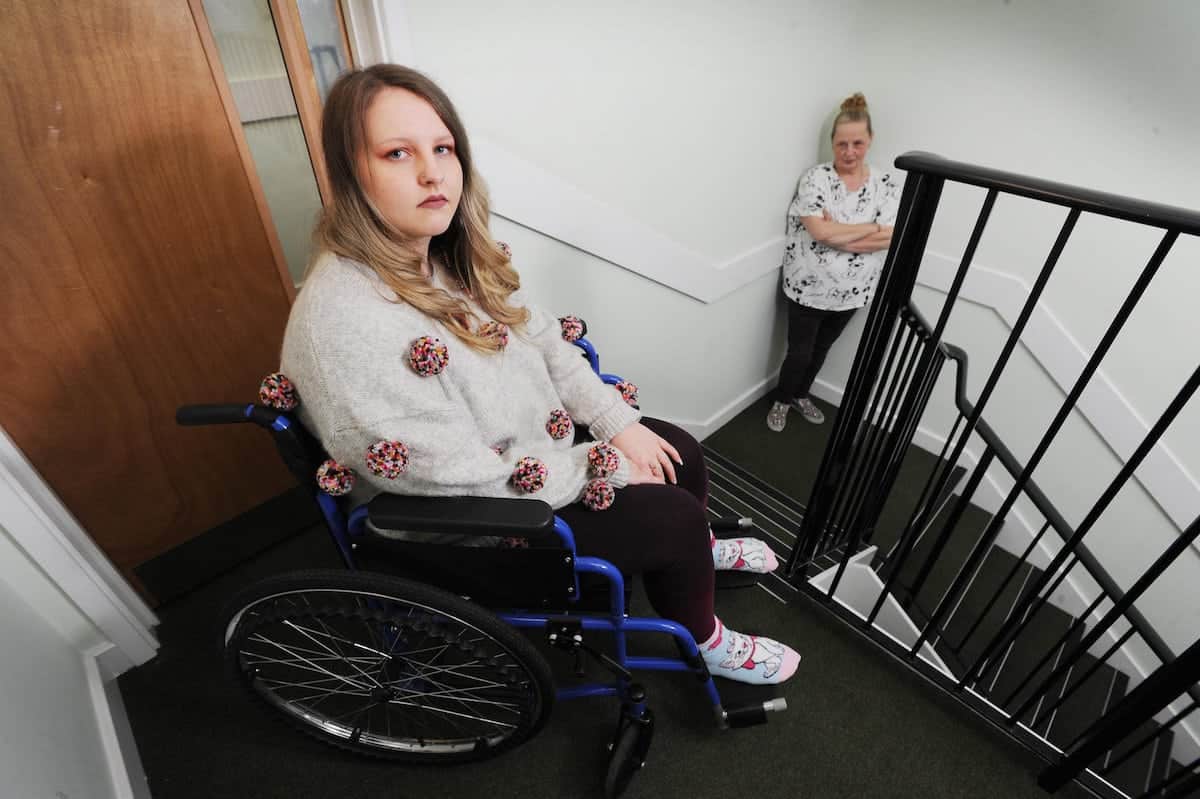 A young MS sufferer has slammed Primark staff after she was left stranded during an emergency evacuation – because she was in a wheelchair.

Wheelchair user Alicia Thain, 21, was terrified after she was left on the first floor of the store while fire alarms went off and other shoppers fled.

But Alicia and mum Anna, 56, were stuck with staff while everyone else left down the escalators.

Anna said: “The alarms started going off and everyone carried on shopping, then a tannoy said the building needed to be evacuated, so staff started sending people down the escalators.

“Obviously the escalators and lifts were shut down but people were being sensible getting out.

“The manager told us to get out, but I asked how he suggested we do that.

“Nobody had any idea how to get someone disabled out of the shop and we were just left there for 15 minutes.

“It was just lucky it wasn’t a real emergency.

“My daughter was only diagnosed with MS three weeks ago and is in a wheelchair – so for her it was a big deal.

“She was quite distressed.”

Many evacuation plans include taking disabled patients to ‘safe points’ in the shop, while staff investigate if it is a real alarm.

But Alicia, who worked as a receptionist at Oxford Ice Rink before her diagnosis, said staff ‘did not know what to do’ and found the evacuation ‘frustrating’.

She added: “It panicked me, because staff did not know what to do.

“If there was a real fire we would’ve just sat there not knowing what to do.

“It is frustrating, especially as it’s new.

“They obviously hadn’t practised this sort of thing and there were also mums with push chairs struggling to carry children down the escalators.

“Staff were just wandering around looking at each other as the alarms were going off, some panicking themselves.”

Other shoppers also spoke out about the confusion, claiming there was ‘no explanation’ of what was happening and claiming the staff were ‘panicking’.

Lauren Tappin, 22, has complained to the store over how it was handled.

She said: “We looked around and the staff had already gone.

“They’d just bundled out the door, while customers were opening fire exits to get out.

“There were no staff showing people where to go, and when we got out they were all just standing around.”

Westgate manager Brendan Hattam confirmed it was a partial evacuation of the centre, following the alarm being pressed by mistake.

He said he believed a sufficient number of staff responded.

Brendan said: “We continuously review our procedures and every incident – we will do so in this case.

“It was a minor incident and the procedure was followed exactly.

“There were plenty of staff around and they have had a lot of training.

“We had quite a few compliments from the public about how this was handled.”

Primark spokeswoman Elizabeth Kittle added: “We can confirm the Primark store was quickly evacuated in an orderly fashion and in line with standard safety procedures, which comply with fire safety legislation.

“We are satisfied that our employees acted in a calm and professional manner.

“In the event of any fire alarm, disabled customers are accompanied by nominated employees throughout the evacuation process and are supported in any way possible – this was the case at our Westgate store.”