Are Unidentified Flying Objects (UFOs) piloted by aliens from outer space preparing to invade Devon? UFOs certainly seem to have been taking a great interest in this county in recent months. On 12 September 2016 a man saw two triangular objects fly at a fast rate over his back garden in Exmouth at 10.30pm. They […] 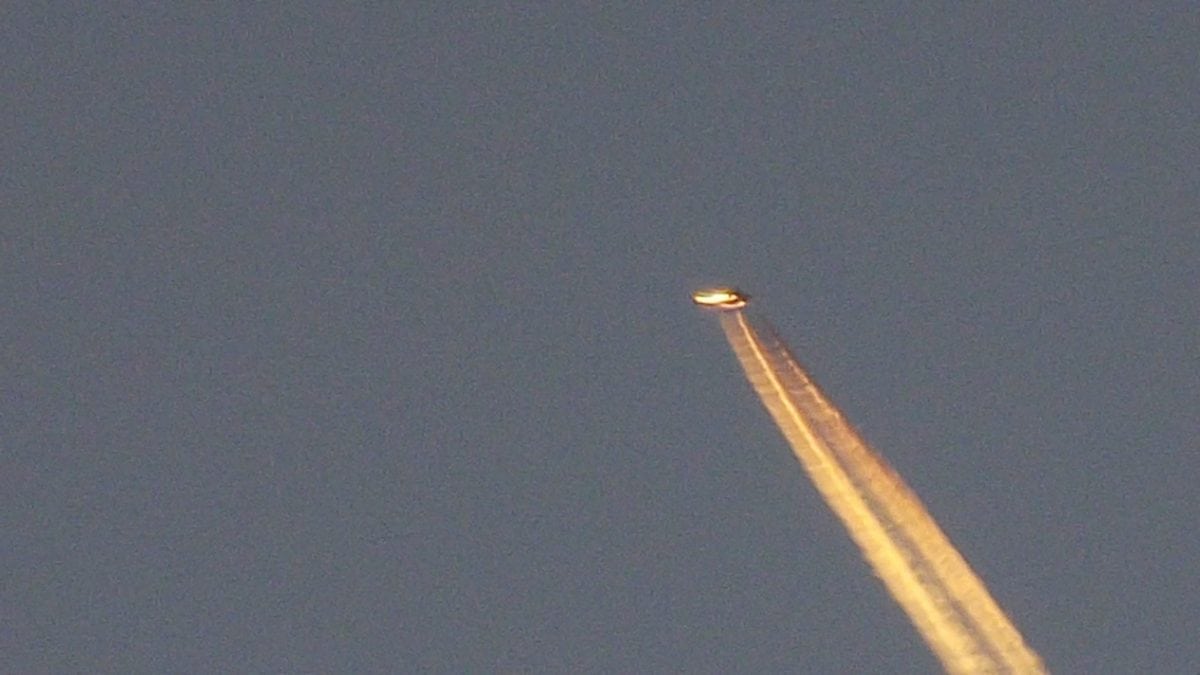 Tyron Osbourne, 52, from Exmouth, Devon, spotted a mystery object above the Devon town, from his garden. See SWNS story SWUFO; Tyron Osborne, 52, of Brixington, was sitting at home on a day off work when he saw what appeared to be a shooting star. This prompted him to grab his camera and tripod and capture the moment that possibly saw an alien flyover. Dominoes Pizza worker Tyron admitted he was a UFO sceptic until the moment he saw what appears to be a flying saucer travelling towards Lympstone. He said: “I noticed a star on the horizon and as soon as the sun went down the star started moving at a pace.

Are Unidentified Flying Objects (UFOs) piloted by aliens from outer space preparing to invade Devon? UFOs certainly seem to have been taking a great interest in this county in recent months.

On 12 September 2016 a man saw two triangular objects fly at a fast rate over his back garden in Exmouth at 10.30pm. They were bouncing around the sky and were being followed by a helicopter. Other witnesses in the area also saw the same three craft in the sky, including a serving soldier who said he has never seen anything like these objects moving in the sky like this before.

The sightings led to speculation that if these were not the infamous triangular spaceships seen by many witnesses throughout the world then it was due to military testing in the area.

A resident of Rolle Street, Exmouth claimed he saw the same thing. He thought it was a police helicopter that flew so low over his home that it caused his front door to rattle. Immediately, before the arrival of the helicopter a bright blue light swept over his garden and it was his view someone was playing around with a drone with a laser strapped to it. Another person claimed the lights were caused by an Edinburgh to Southampton aircraft that coincidentally flew over at the same time as the helicopter.

In the same week Tanya Davis and her daughter, Charlee, filmed a bright light outside their home in Exeter Road, Exmouth. Charlee said:

“Me, my friend and my mum went rushing outside and the light stood still for two minutes. We thought it was a plane until we saw that it wasn’t moving. It was making no noise, and as it eventually got closer I saw five lights spinning and it was a diamond shape.

“We were thinking that it was a drone at one point, but really could not explain it. I ran off screaming!”

It is noteworthy this activity occurred near the Phear Park area of Exmouth where in 2010 retired engineer Roy Shaw was walking his dog had a close encounter with a translucent object that made a droning sound. He said:

“The object was round in shape and about 30 feet in diameter with blue and red flashing lights on its perimeter, and it appeared to land at the top end of the park by the bowling green.

“My dog started to growl when what I can only describe as a white shape came towards us.

“It was about four-feet high and seemed to be translucent, and moved very slowly towards us.”

Not surprisingly, he ran away from the scene and that night his dog kept whimpering as it looked out the window facing the park, and Roy had trouble sleeping.

In those instances no one took a picture of the UFOs but in the past year a few people have managed to capture images of them. John Mooner who describes himself as the chief photographer for the World UFO Photos website, who lives in Newton Abbot has been particularly prolific. In September he claimed that he had taken photographs of eight UFOs in the past three months leading him to think Newton Abbot is a hotspot for alien activity.

These pictures were mainly of distant objects, but one of the most spectacular was spotted on 18 July 2016. This was of a cigar shaped object that emitted white smoke as it travelled slowly across the sky. John said:

“An alien being with black eyes then proceeded to stick his head out from the back of the cigar shaped UFO and looked in my direction.

“The alien then stuck it’s long tongue out at me and then smiled. What the hell. They have tongues? I managed to capture the alien in the photograph.”

In October 2016, John said he was walking in a local park when he came face to face with a grey alien who was blocking his way. He had the presence of mind to quickly take a picture before the batteries fell out of the camera. The staring black eyes of the alien scared him so much he ran “like hell through the woods”. He ran for what seemed like miles before coughing up blood.

At the very end of December 2016 a UFO flew at high speed towards three witnesses in Churchill Road, Exmouth. Mark Emmins said:

“It was lit up like a white light at first, then changed colour to a dark shade before it vanished. But it was stationary for a few hours before it moved.”

His neighbour Tyron Osbourne who managed to take pictures of the object said:

“It was in Upper atmosphere well above civil aviation but still in our atmosphere when it started moving even with a tripod I struggled to keep up, so as a cameraman I pre-empted where it was going to be so as not to move the camera.”

Mark like many other witnesses in Devon of strange phenomena in the sky, concluded:

“I have no idea what it was, we have been baffled.”

Whether you are a believer or a sceptic it is fascinating to wonder what is really going on and if we should get ready to welcome extraterrestrial visitors to the splendours of Devon.

Nigel Watson is the author of numerous UFO books including the UFO Investigations Manual (Haynes) and UFOs of the First World War (The History Press).