A squaddie who was bitten by a spider related to the deadly black widow was left with a gaping hole in his leg which was so deep it exposed his MUSCLES. Matt Clarke, 31, was bitten by a false black widow spider as he was lying in bed and despite not being life-threatening – the […] 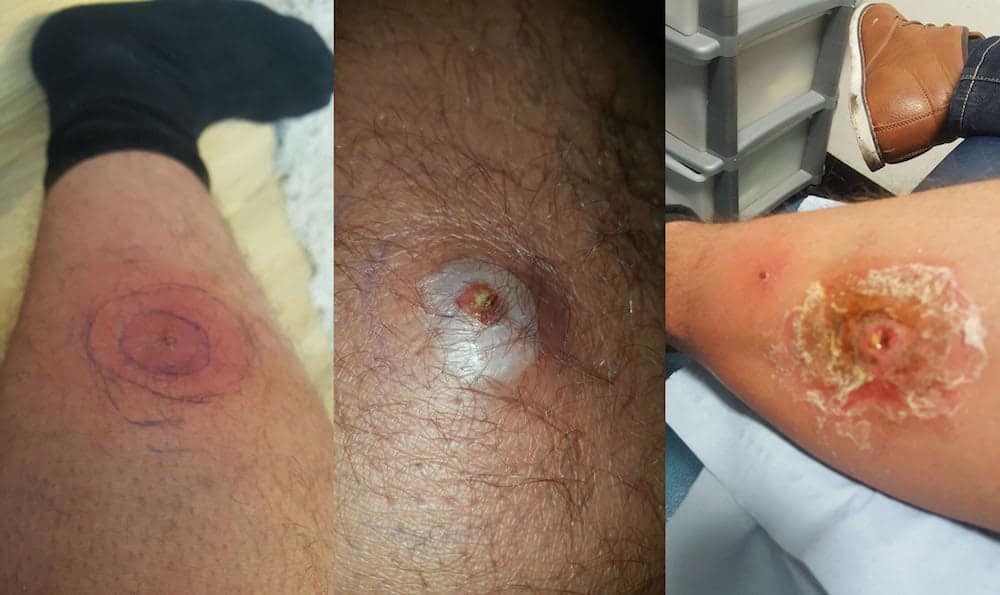 A squaddie who was bitten by a spider related to the deadly black widow was left with a gaping hole in his leg which was so deep it exposed his MUSCLES.

Matt Clarke, 31, was bitten by a false black widow spider as he was lying in bed and despite not being life-threatening – the wound left him unable to walk.

Army man Matt said he woke up from a deep sleep with a “tingly sensation” and he noticed the tiny brown spider on his leg – but thought nothing of it.

However, the wound area burst open just days later as he felt a hot liquid dripping down his leg.

The pain made it impossible for him to even walk and he was left with “a hole he could see his muscles through”.

Matt, of Mansfield, near Nottingham, said: “I’ve been in the Army for ten years, I’ve been all over the world and slept next to more dangerous spiders and never got bit.

Matt, who lives with his partner and two children, said he brushed the spider off his leg and went back to sleep one night in November last year.

When he woke the next day the burning sensation in his leg became unbearable throughout the day – forcing him to turn to A&E.

Matt was treated for a spider bite and thought that was the end of it.

Describing the incident, Matt added: “I just felt this dripping down my leg and it was a painful type of burning sensation.

“I then checked it out and the bite area had burst open – it was a hole I could see my muscles through.

“I couldn’t understand why the bite wasn’t healing so I tried to find answers.

“I researched spiders and my symptoms, and I realised I had been bitten by a ‘false black widow’.”

A doctor confirmed Matt’s online research and returned to the hospital where he was given an x-rays.

Spider experts say that a bite from the type of spider which sunk its fangs into Matt is nothing more than a bee or wasp sting.

However, medics told him his bite was “toxic” and needed constant monitoring by drawing a line around the outskirts of the infected area to check for the spread of infection.

The false widow spider is not deadly, but can deliver a similar bite to its antipodean cousin, which can kill within hours.

Instead of the venomous black widow spider, which dons devilish black and red markings across its body, the false widow spider in Britain is usually harmless.

The Steatoda nobilis, commonly known as the false widow spider, is native to Madeira and the Canary islands, and is believed to have arrived on British shores via a cargo transporter in the 19th Century.