A fortune teller who correctly predicted Brexit using ASPARAGUS has revealed her top tips for 2018 – including Theresa May being ousted as Prime Minister. Jemima Packington, 61, is the world’s only Asparamancer and claims she can peer into the future by tossing the veg in the air and interpreting how the spears land. She […] 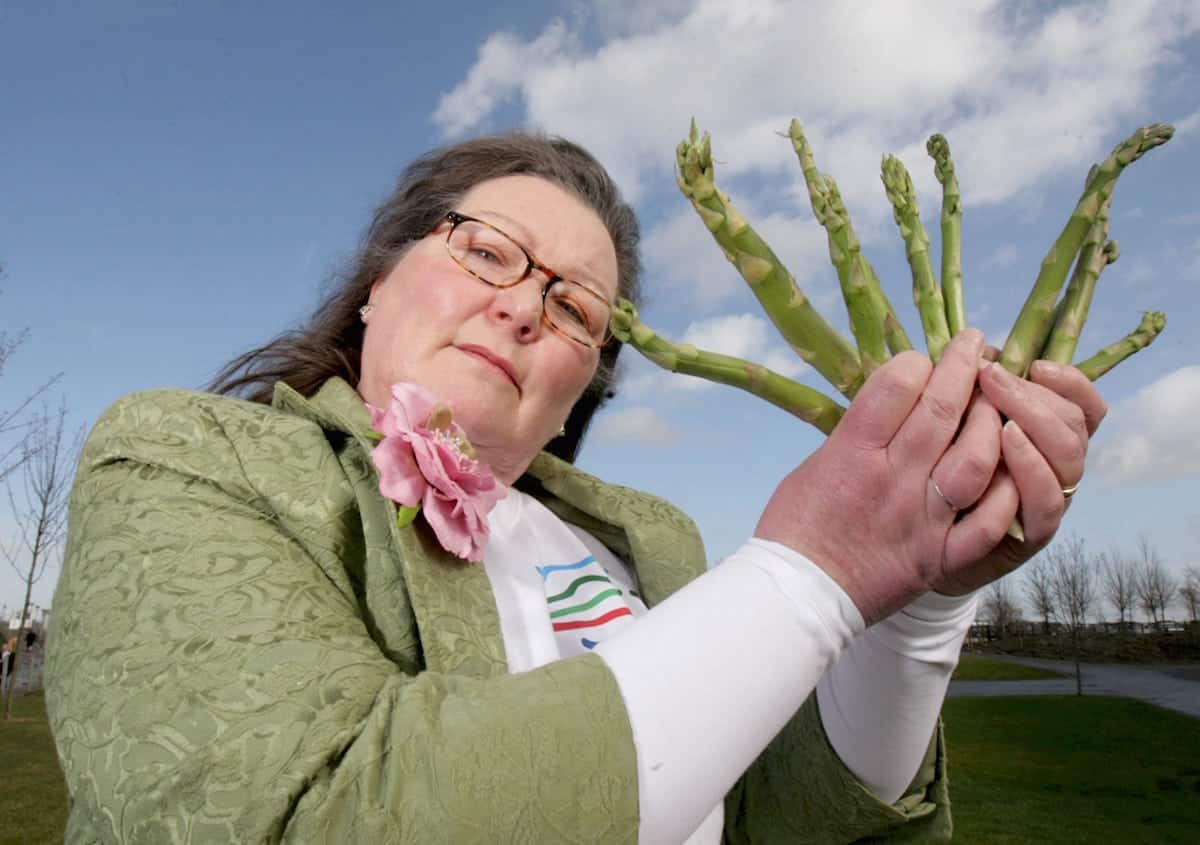 A fortune teller who correctly predicted Brexit using ASPARAGUS has revealed her top tips for 2018 – including Theresa May being ousted as Prime Minister.

Jemima Packington, 61, is the world’s only Asparamancer and claims she can peer into the future by tossing the veg in the air and interpreting how the spears land.

She predicts that 2018 will see the US bring the world to the brink of serious conflict and the bursting of the Bitcoin bubble.

She also believes there will be earthquakes and volcanic eruptions over the next 12 months but there may be a record number of Royal births.

It’s also bad news for Theresa May as Jemima predicts she will be replaced as Prime Minister before the end of the year.

And there’s more trouble for Westminster as Jemima believes there will be another political scandal.

The mystic veg has already been proven right this year by predicting New Years’ floods as Storm Eleanor lashes the UK with 100mph winds.

She also says it will be a year of Oscar success for British films and one particular British actor.

However, it doesn’t look good for British sport with no national teams or individuals predicted to win anything in 2018.

Already the English cricket team have lost the Ashes to Australia and the tennis world was dealt a blow when Andy Murray announced a hip injury had forced him to pull out of the Australian Open.

Despite the England football team having a relatively easy group in this summer’s World Cup, Jemima doesn’t predict them lifting the trophy.

Astonishingly, some of Jemima’s predictions came true last year including saying the summer would change from drought to downpours – as the UK saw the 11th wettest on record.

She also correctly stated the UK economy would grow after implementing Brexit.

Despite gloomy predictions of a slowdown, the economy grew by 1.5 per cent last year.

Jemima, from Evesham, Worcs., who now lives in Bath, said: “I take what I do seriously but I never take myself seriously.

“When I cast the asparagus, it creates patterns and it is the patterns I interpret.”

Jemima prefers to use fresh Worcestershire asparagus grown in the Vale of Evesham – the UK’s main supplier of the vegetable.

She picks a handful of tips, tosses them into the air and “reads” the shapes they form when they land.

She began making predictions aged about eight – a gift she says she inherited from her great aunt who used to read tea leaves.

Jemima said: “I am usually about 80-90 per cent accurate with my predictions.

“Occasionally I get one slightly off, where I haven’t quite read it correctly, but I’m never far off.

“Brexit happened, and Prince Harry did have a very important announcement.”

PREDICTION: The summer will change from drought to downpours.
RESULT: RIGHT: Britain endured the 11th wettest summer on record.

PREDICTION: A showbiz couple regarded as “national treasures” will announce their divorce.
RESULT: RIGHT: After 19 years of marriage, Jamie and Louise Redknapp divorced in December.

PREDICTION: The USA will be seen as a pariah under Donald Trump.
RESULT: RIGHT: Trump was widely condemned for recognising Jerusalem as the capital of Israel and for pulling out of the Paris climate agreement.

PREDICTION: Brexit will go ahead despite efforts of those wishing to derail it.
RESULT: RIGHT: Theresa May triggered Article 50 and EU leaders gave the green light for Brexit negotiations to move on to the second phase.

PREDICTION: Other EU countries will follow UK’s example and apply to withdraw from the EU.
RESULT: WRONG: Despite debate about whether other countries would follow suit, no other country has begun the withdrawal process.

PREDICTION: Troubling times for the Royal Family.
RESULT: WRONG: Despite Prince Philip retiring from royal duties, Duke and Duchess of Cambridge announced they were pregnant again. Prince Harry and Meghan Markle also announched they were getting married this May.

PREDICTION: Political turmoil within UK opposition parties will rumble on.
RESULT: WRONG: Theresa May was the year’s big political loser when she and the Conservatives lost their majority following the general election in June.

PREDICTION: A major review of the UK’s education system will be undertaken.
RESULT: RIGHT: Traditional grading of GCSEs were controversially replaced with numbers one to nine.

1. Record number of Royal births.
2. UK will suffer flooding at the start of the year.
3. Earthquakes and volcanic eruptions will occur around the globe.
4. Theresa May will be ousted and Britain will get a new Prime Minister
5. Oscar success for British films and one particular British actor.
6. Politics will be rocked by a string of scandals.
7. US will bring the world to the brink of serious conflict if successful intervention by the rest of the world cannot be achieved. Watch out for unlikely peacemakers.
8. No major sporting achievements for our national teams.
9. Brexit will cause many countries outside the EU to review their border and immigration policies.
10. The Bitcoin bubble will burst.
11. Major world economies will suffer a downturn but will rally slightly.
12. Resurgence of the book as opposed to cyber libraries and video gaming.
13. More countries around the world will follow the Danish ethos of Hygge – or contentment and wellness of spirit and body. A significant return to family values will be seen.