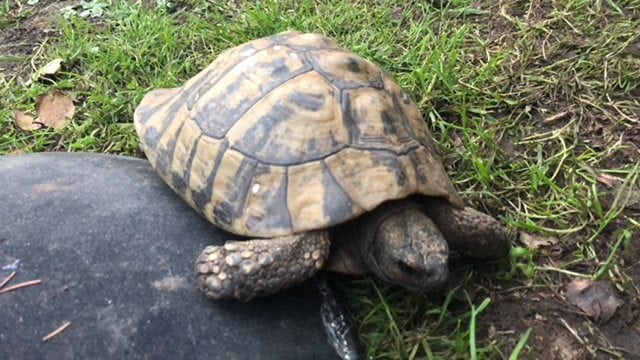 A tortoise become so randy after half a century as a bachelor its owner posted an online lonely hearts advert in a bid to find a mate for his pet.

Timmy the Tortoise has been happy alone for 48 years according to Andrew Gipson, who has had the reptile as a companion since he was a young boy.

But the Hermann’s tortoise has suddenly become so excitable that Andy thinks it’s time he finally found a love interest.

After posting a lonely hearts ad on Facebook, Andy was contacted by a tortoise society based in Norfolk and plans to go along to a meet up.

Andy, 52, said: “It’s only recently I’ve noticed him being so keen. He’ll try and mount the dustpan brush, my shoes and he’s had a long session with the umbrella base.”

“He’s never been this eager before.”

Andy was just four years old when he was introduced to Timmy by his Nan, who worked at Whipsnade Zoo.

He said: “They had a couple of spares so she brought him home as a pet for me and my brother.

The pair grew up together, but as Andrew came of age and had his first teenage romances, Timmy remained uninterested in women.

But the former IT support worker noticed a change come over his shelled friend after recently moving from Milton Keynes back to Diss, Norfolk, to help care for his parents.

He said: “I don’t know how old tortoises are when they mature but obviously for Timmy it’s at 48.”

Hermann’s tortoises – found naturally in Mediterranean Europe – can grow up to around 20cm as adults.

In some rare cases, they have been known to live for more than 110 years.

In the time Andy has owned Timmy, the tortoise has had some close shaves, almost being run over by his father’s lawn mower.

Animal-lover Andy, who also has two dogs, said: “When dad’s cutting the grass, he follows him around. Once, he turned the lawn mower around and chipped his shell. “He’s driven over him in his car as well, but that was also an accident.”

In his younger years, he even used to scale the garden fence.

Andy said: “He used to try and climb up the ivy on the garden fence but he’s too heavy for that now.”

After posting a lonely hearts ad on Facebook, Andy was contacted by a tortoise society based in Norfolk.

He said: “They told me that if I go along, they’re going to introduce him to some suitable tortoises.”

However, he was warned that the romantic liaison may have to be supervised.

He added: “They’ve said he might be a bit desperate and be too enthusiastic.

“I hope he can sow his oats. It will be interesting to see his reaction.”

However, he added that he was concerned as he was told that home-bred tortoises could pass diseases to each other.

Andy said: “I would rather have a desperate virgin than no tortoise at all.”