A pensioner is living in fear of a flock of seagulls who are attacking her every time she goes in and out of her home. Linda Boylen, 61, says up to 15 birds have bombarded her during ‘five weeks of hell’. The problem began when three chicks fell from a nest on a neighbour’s property […] 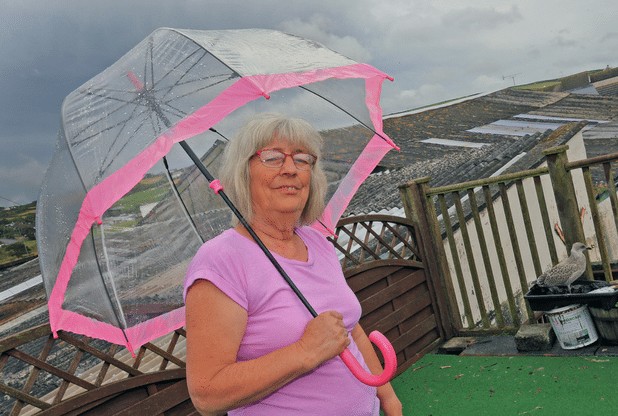 A pensioner is living in fear of a flock of seagulls who are attacking her every time she goes in and out of her home.

Linda Boylen, 61, says up to 15 birds have bombarded her during ‘five weeks of hell’.

The problem began when three chicks fell from a nest on a neighbour’s property onto her patio.

The parents of the young see Linda as a threat and have been fiercely protecting them – aided by other birds who have joined in.

Linda, of Perranporth, Cornwall, said the attacks are so scary that on many days it takes her more than two hours to eventually get into her home.

She said: “I’ve got three large chicks on my patio at the moment. They’ve been here about five weeks now and have been causing chaos.

“It’s been five weeks of hell – there’s been times I haven’t even been able to get in to my own house because of it.”

She said the parents of the three chicks have been attacking her on the steps leading up to her property and said she is lucky she has not been injured.

She added: “My patio and entrance to my house is on the first floor above a shop, you have to come in the back way and up a set of steps, that’s where the gulls have been.

“Yes seagulls swoop, but this is different because they have been actually attacking.

“The parents would attack me when I came up the steps and that drew the attention of others so at one point I had 15 gulls attacking me.

“I haven’t had any injuries luckily, but I could have done very easily. I’m lucky, I could have fallen down the stairs when they attacked me.”

She added: “On two occasions it took me two hours to get into my house, it’s been absolutely horrendous.

“They’ve calmed down a bit now they’re getting a bit bigger, but I’m still having to deal with walking through all the poo which is a health and safety issue of its own accord.”

When the ordeal started Linda contacted a pest control company to ask them to remove the nest and the chicks and relocate them away from her home.

She was told a licence was required to move the bids which can take up to 30 days and she wants the law changed so it can be fast-tracked in exceptional circumstances.

She added: “At the moment you have to apply for a licence to be able to remove live herring gulls from your property, but that can take up to 30 days.

“The problem becomes null and void by that time because the chicks have flown the nest.

“There’s nothing to enable you to do anything with the chicks of herring gulls, you can with other birds in exceptional circumstances, but not these.

“I am challenging that law, I want to know why you can’t move them in exceptional circumstances like mine. I’m not saying that they should be put down, but they should be able to be moved.

“The law needs to change. It should be a licence given in 24 hours in exceptional circumstances. It is dangerous.”