It involves a hike, a treacherous row and sometimes even a rock climb. 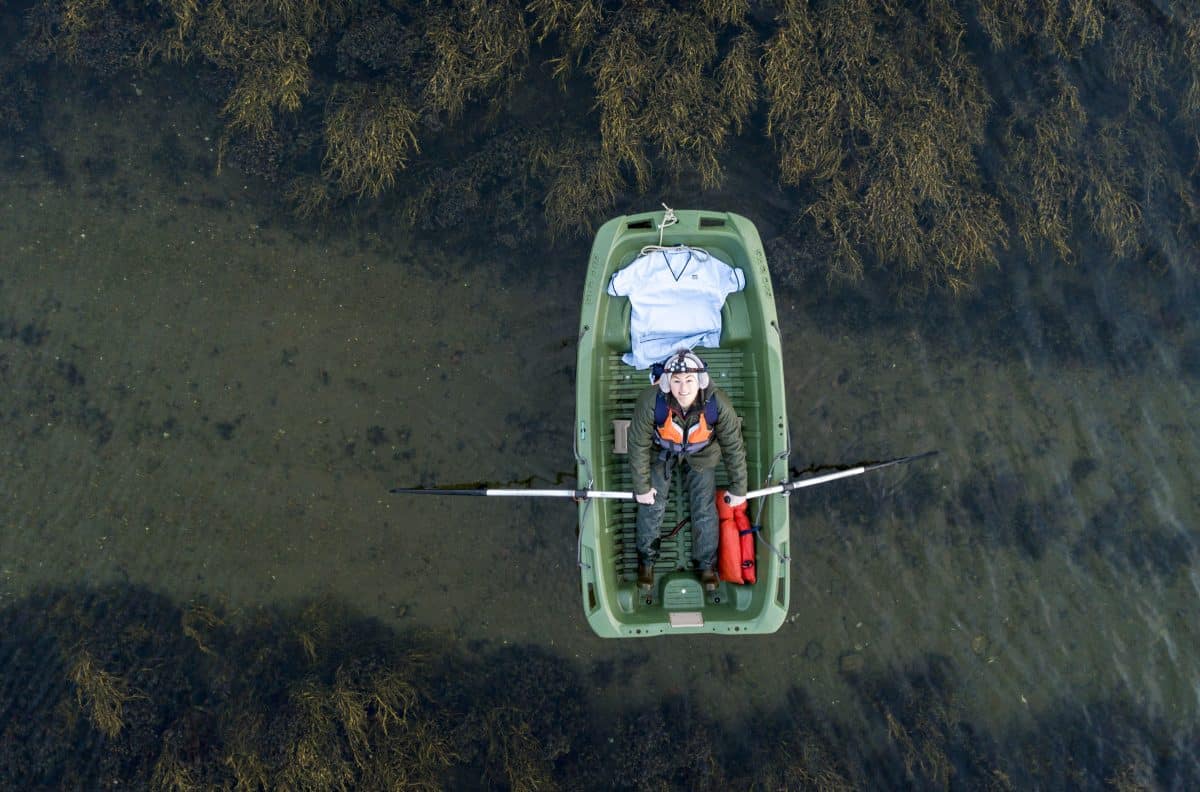 Meet the dedicated NHS carer with possibly the UK’s toughest commute – including a moonlit hike, a treacherous row and sometimes even a rock climb and bog walk.

Vanessa Rochester, 32, and her family are the sole occupants of a remote otherwise uninhabited Scottish island cut off from the mainland by a raging tidal channel.

But that doesn’t stop the mum-of-one diligently doing what it takes to get to the elderly residents she cares for at the NHS home on the mainland – no matter the weather.

After kissing husband Jeff, 48, and their one-year-old Duke goodnight, her journey to work starts with a 30 minute 2.4km hike across the private island.

At the waters edge she clambers into their 8ft plastic boat, and single-handedly rows across the very fast and often dangerous current, her path lit just by the moon and stars.

The 300m crossing can take five minutes on a calm day – and five times as long during a storm – before she reaches her car on the other side and starts a 90 minute drive.

Her worst commute to date saw her blown so dramatically off course she ended up back on her island, and had to abandon her boat and scramble up a cliff and through a bog to safety.

Jeff – caretaker of their west coast island – had to strap Duke on his back and head out with a torch to perform the role of a lighthouse, so she could work out her location.

But she still made it to work – taking their leaking back up boat which is just about usable “if you row quick enough”.

And despite the arduous and often dangerous commute, brave Vanessa said it’s worth it for a job she loves.

“I love working with elderly people and it’s a really good team that I work with, plus it means I get to see other people, which otherwise doesn’t happen much.

“When we first talked about moving here I wasn’t really sure, but after I visited I eased into life here really quickly.

“It was a lovely sunny day at the end of Spring and everything was bursting with life.

“The waters were green and the sun was out so it was just magical. It doesn’t look like that at the moment though!”

The 300 acre peninsula the family live on is on Eilean Shona, a large tidal island owned by Vanessa Branson, Richard Branson’s sister.

They moved into the island’s 17th century caretakers’ waterfront cottage in July 2016.

Jeff manage the island for the family who own it as a retreat – fixing fences, felling trees, and anything else that needs doing.

Jeff said: “I’ve always wanted to live on a Scottish island because my parents used to caretake one many years ago and I used to visit them there.

“It was a fantastic place, but I would never thought it would happen and would just be one of those dreams!”

Vanessa is a care worker at a home for the elderly in Lochaber, where she started working just a few months after they moved to the island.

Her commute is a three hour round trip, involving navigating the tiny rowboat from the island onto the mainland regardless of rain or strong currents.

The only way off the island is to row when the tide is in, and due to Vanessa’s working hours, it often means she must navigate their plastic row boat through dangerous conditions.

The social care worker said: “My work is very important to me especially in these time so if I bowed to the weather I would never get to work.”

The boat is fully exposed with no protection from the elements, so Vanessa frequently puts on four layers of clothing with wellies, a hat and gloves!

After reaching the other side, Vanessa drives for well over an hour to get to work and then gets changed in her car.

On January 13, Vanessa experienced her worst voyage to date.

“Usually I can be guided by the moonlight but last night there wasn’t any, it was pitch black with a strong prevailing wind and very strong currents,” she said.

Whilst the dedicated NHS worker only has to cross 300m of water, when the conditions aren’t right she “truly is running a gauntlet!”

She said: “I was roughly halfway across the channel when my oar slipped from the rowlock and in stopping to amend it I was taken by the current and spun round many times.

“By the time I gathered myself I had drifted way off course and found it very difficult to recover.

“Eventually I made it to land, tied the boat to a tree and I had not one clue where I was- all I could do was try to make my way along the rugged coastline back to my original landing point. “

Vanessa found herself trapped by the cliffs, so instead scrambled up the bank through heather and bog, but started to get worried.

She said: “Unbelievably, my phone picked up signal and I FaceTimed Jeff who was just putting our son Duke to bed.

“I had no idea where I was!

“Jeff slung Duke up on his back and headed to the North Channel where we agreed he would shine a torch across the water to enable me to find my bearing- this point is 30mins walk from our house!

“Finally I spotted a beam of light across the channel, turns out I was still on the island, but had drifted way off course and then walked in the opposite direction.”

It took Vanessa half an hour to scramble towards Jeff and Duke’s torchlight, and whilst Jeff insisted they all go home, the determined carer would not relent.

She said: “I couldn’t let my team or residents down by not coming in for my shift.

“I had no idea where the good boat was, having tied it to a tree, but we have a back up wooden boat called the ‘Lego boat’, that leaks but if you row quick enough you can get across!

“From there I had another half mile walk to my car, followed by an hour’s drive and 12 and a half hour night shift. What a night!”

Vanessa has to battle dangerous conditions from October to March when going to work.

She walks a dirt track through a woodland with protected Scotch pine and oak trees to get to the crossing point on the south of the island.

Venturing off that track would only be for experienced hikers as the treacherous cliffs and rocky hills make for a tough terrain.

It can get as cold as -7°C, and whilst snow is rare on the island, the ice has been known to catch people out!

“My brother got stuck her for a whole week once because he couldn’t get his car up the track, which is really steep, through a couple of inches of snow!” said Vanessa.

The channel she must cross can fill up with water within seconds, reaching depths of 5.56m, so Vanessa has to be on the ball.

She said “I have to do some maths sometimes, as how you get across depends on the winds, so I have to use it to help me figure out the best path, but I can only do it in daylight!”

They haven’t had many visitors since the pandemic began, but before that the family would have visitors regularly during the summer.

Many of Jeff’s friends are “big, burly men” but none of them could manage to row across the causeway without losing control!

“Vanessa or myself have to bring them across, they get pretty embarrassed by it!” he said.

Jeff’s work often sees him up at first light and working until its dark, but he maintains he is a “land animal and tries to stay away from boats”.

The family venture to the mainland once a month for supplies, and treat themselves to a lunch in civilisation.

“We dread it as it’s a full day, from first thing in the morning to drive there and then getting it all back either in the truck or loading up the row boat if the tide is in!” Jeff said.

The family may be the sole human residents of the island, but they are joined by their six dogs, ducks, ferret and hawk Hilda.

Hilda flies freely around the island, but comes back to the house for her breakfast every morning.

The couple grow their own carrots and potatoes, and enjoy life of the grid, but Vanessa did admit “sometimes I really, really really want a takeaway!”

When they have good enough signal, sometimes the family can watch Netflix, but otherwise in her downtime Vanessa enjoys the simple pleasures of reading and knitting!

“Between the animals and running the house and Jeff’s work outside and with Duke, there’s no question about occupying yourself!” she said.

But Jeff responded: “I actually write songs and short stories- I spend the long winter nights penning tales of fairy gangs and their rise and fall… Solitude gets to you after a while!”

There was always a possibility that toddler Duke would be born on the island, but after a routine check-up Vanessa was advised to stay at hospital.

Duke was born on May 20 2019 and, at less than two years old, is well adapted to island life, helping to collect duck eggs and even cut the Christmas tree down.

Jeff said: “He’s a bit of a Mowgli as he knows no other way! He’s not got a TV in front of him all day and is always out walking with Vanessa.”

The islanders are very self-sufficient, eating their own duck eggs and freshly caught mackerel, sea trout and lobsters.

Jeff said: “If we had to be 100% sufficient we could do it, the shops are just a little bit too easy to get to!”