Wyndham Hacket Pain @WyndhamHP It takes some time to adjust to the accents of the characters in Trespass Against Us, not because they are difficult to understand, but because gangsters and criminals are not meant to sound like this. The rural west of England is not the traditional location for such dramas, which are much […]

by Kit Power
in New Movies 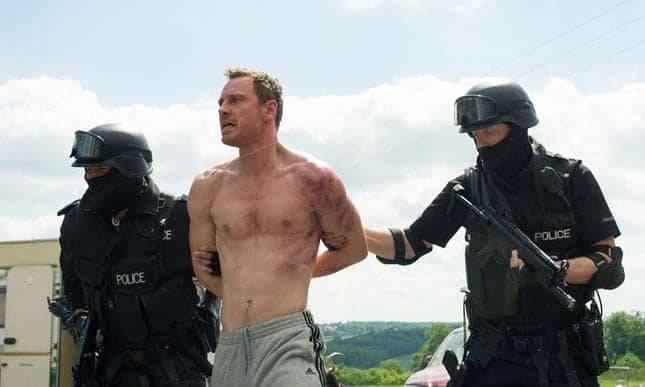 It takes some time to adjust to the accents of the characters in Trespass Against Us, not because they are difficult to understand, but because gangsters and criminals are not meant to sound like this. The rural west of England is not the traditional location for such dramas, which are much more accustomed to bleak inner city areas.

There is a strange juxtaposition between the idyllic countryside and the brutish behaviour of the Cutler family. The central figures are Colby (Brendan Gleeson) and his son Chad (Michael Fassbender) who are at the heart of the family’s dealings. With police attention increasingly on them, Chad and his wife Kelly (Lyndsey Marshal) want a better life for them and their children, and look for a way to escape criminal activity.

There is a lack of subtly to the way in which the plot plays out, with each move executed with a heavy hand and substandard dialogue that is inconsistent and awkward. It is hard to believe the absurd way in which events unfold. The heists and crimes don’t even feel like they have been properly thought through or planned.

Michael Fassbender gives an impressive central performance. As ever he is an engaging screen presence and manages to hold the film together while it otherwise meanders. Brendan Gleeson’s performance is also engaging even if it appears to be a strange hybrid of gritty realism and over the top gangster clichés. As bizarre as some of his idiosyncrasies are, and however unconvincing a criminal he may be, he is enjoyable company and has one or two memorable monologues.

The father and son dynamic between Fassbender and Gleeson is interesting and creates some dramatic moments. The film, however, is unable to build on these instants and is incapable of producing any real insight or conclusions on the events at hand. The mixture of styles that can make Trespass Against Us visually appealing make the rest of the film feel unfocussed and lacking in ideas. The story could have been a foundation to discuss ideas of family, crime, and reform, but instead only briefly alludes to these topics. All this gives the sense that the film had more to give and that there is something missing at its heart.

In the end, the camera work and cinematography cannot overcome other deficiencies. The heist scenes are tense and shot with energy but feel superfluous when there are not clear motives or reasons behind them. The best crimes films are character based and look at why certain individuals are attracted to this kind of life. In this case such concepts are never properly explored.

Trespass Against Us may be thematically vague and narratively conflicted but has a charm and energy that holds the film together even if it is a jumble of ideas and styles. The Cutler family can be enjoyable company and even if their actions do not surmise to much the film can be entertaining despite its obvious flaws.

Trespass Against Us is out in cinemas from Friday 3rd March.