Jack Pantall crafted the huge tribute to the health service in one of his fields near Staunton-on-Wye, Herefordshire 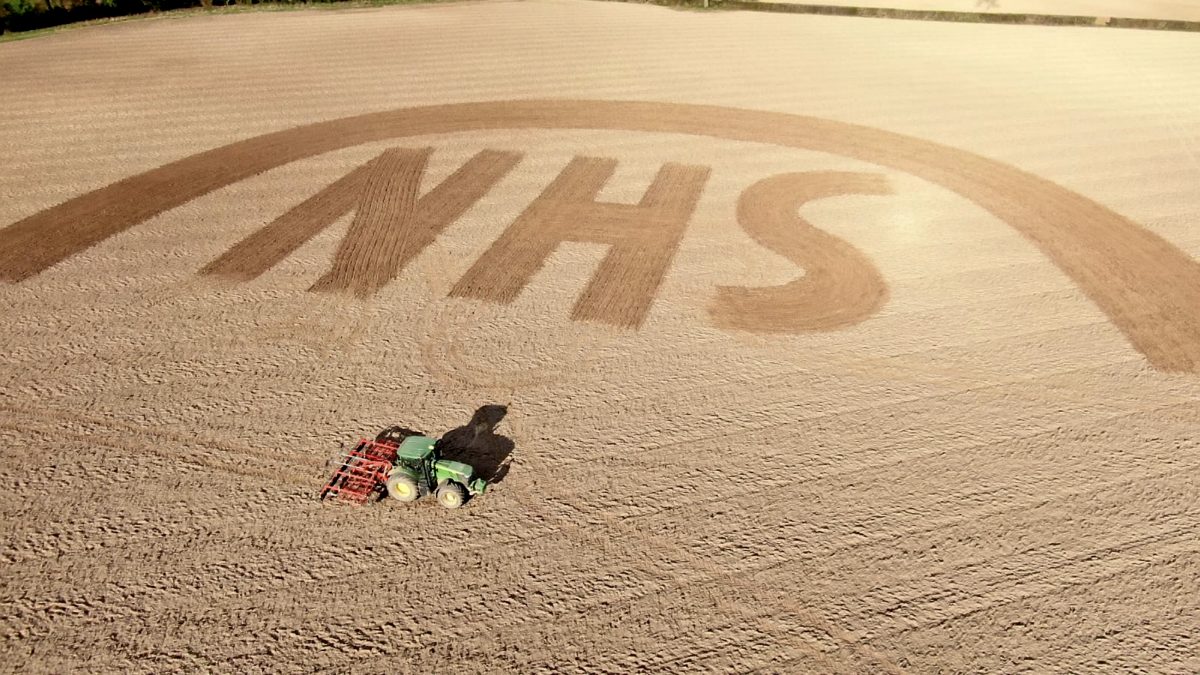 A talented farmer has created his own heartwarming tribute to the NHS – by using his tractor to plough a giant 500ft (152m) rainbow in one of his fields.

Jack Pantall, 33, used a drone connected to his phone to map out the huge image in appreciation of Britain’s health workers as they battle the coronavirus pandemic.

He crafted the NHS logo and rainbow – which is which is 60m tall and 152m wide – on his farm near Staunton-on-Wye, Herefordshire.

The dad-of-two said he wanted to show his support for all our NHS heroes as his brother Harry, 31, is a paramedic and his sister-in-law works as a doctor.

He said: “My brother being a paramedic is part of the reason for doing it but we’re obviously thankful for all our NHS heroes on the frontline.

“I had one field left I could use before my spring planting finished so I decided to do it as soon as a I could.

“My brother and I had been thinking about it and we saw some other people showing their appreciation in different ways. He said, ‘yeah why not let’s do it’.

“Someone else in Exeter had done #NHS into some corn so we were thinking of something more original.

“My brother suggested putting the Stay Safe rainbow over the top. We decided to give it a go and the worst-case scenario is it doesn’t come out right.

“Thankfully, however, it did. It turned out beautifully.”

The rainbow has become a symbol of support for people wanting to show solidarity with health workers on the front line during the Covid-19 outbreak.

Jack planned the drawing, but due to the wrong setting on his tractor, he ended up having to look at a video feed his drone was sending to his phone to make the image.

He added: “I had a piece of paper with a drawing on but in fact, that went out the window because I got the wrong setting on the tractor.

“My drone connects to my phone so I was watching my phone screen while I drew it. I could see how it was coming out while I was doing it.

“So the video you’re watching is how I was able to draw it.

“I wasn’t looking at the field because it didn’t make any sense because the picture was so big.

“I was driving around trying to get it done in a hurry because the drone battery only lasts about 20 minutes and I had to be relatively quick on it.

“I managed to complete it in about 16 minutes, which was just in time really.”

Brother Harry, a paramedic for the South Central Ambulance Service who lives in Bromsgrove, Worcs., then cut together the video in the style of a time-lapse.

Jack added:“Harry has created that video which is a minute long which is absolutely fantastic because no one would want to watch it in full.

“It is about 60 metres tall and about 150 metres wide. It was supposed to be bigger when I first planned it – but we’re more than happy with the outcome.”

Jack has also set up a JustGiving page to support NHS staff, which includes sister in law Shay-Anne who is a Psychiatric Doctor, and hopes his stunt can help raise spirits.

He said: “It horrendous, with people dying at the moment it can’t be nice.

“Not just for my brother and sister in law but for all of the NHS staff, all of the front liners and the key workers involved.

“Even down to the delivery people have gone mad just trying to support the whole country.

“The NHS is the main ones we must thank because they’re right in amongst it.

“It was all just to say a massive thank you to them.

“We’ve got various friends who live next to us who are all nurses, resuscitation nurses, so they are in the mix of it. It’s a small contribution and they were ecstatic over it.

“It really makes you feel good when they know there are people out there appreciating them.

“You never know someone is appreciating you until someone says.

“My gesture was just something we thought that we do down the field. It’s just us showing a small amount of appreciation.

“At the very least it brings a smile to people’s faces and makes them know we are thinking of them.”

You can donate to the brothers NHS fundraising efforts here: https://justgiving.com/fundraising/farmerjack4k