This is the shocking moment a cop uses his police car to mow down a suspect – before saying ‘that’s how you deal with that’. Footage shown to a police misconduct panel captured PC Rowan Huskisson, 33, mounting the pavement and driving into pedestrian Sam Whitmore. After seeing him fall to the floor, police bodycam […] 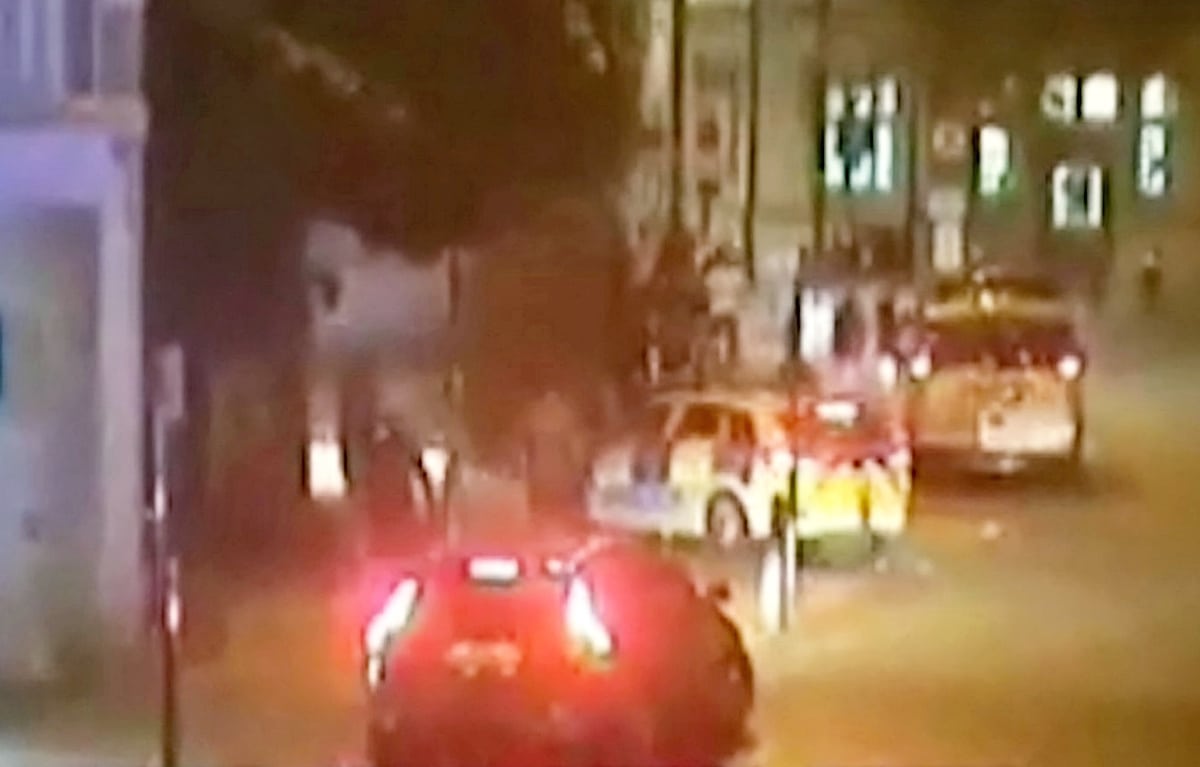 This is the shocking moment a cop uses his police car to mow down a suspect – before saying ‘that’s how you deal with that’.

After seeing him fall to the floor, police bodycam footage caught him saying: “That’s how you deal with that”.

But despite his “utterly unacceptable” behaviour and being found guilty of misconduct, PC Huskisson has been allowed to keep his job in the force.

He claimed his intention was to try and block Mr Whitmore’s path and he thought he could stop in time.

Reading out a statement to the panel, the officer said: “I understand I shouldn’t have attempted this manoeuvre at all, I certainly won’t again.

“Being a police officer has been the greatest achievement of my life so far, I wish to continue to learn and make better decisions in the future.

“I am proud that I make a difference to the public, and wish to continue to do so.

“When I made the decision to block the path of the suspect, I thought I had assessed the risk correctly against the need of the public’s expectation for me to catch a suspect of a crime.

“I will not allow myself to make this mistake again.”

PC Huskisson was responding to a call from club bouncers in Cambridge city centre in May last year when the incident took place.

Whitmore – who was never arrested or charged with any offence – admitted drinking for at least 12 hours before he was restrained by bouncers in Cambridge city centre.

He walked away but was spotted by PC Huskisson in his marked police car who mounted the pavement and ploughed into him.

Chris Griffiths – a former police officer on shift with PC Huskisson on the day – told the panel that PC Huskisson hitting Mr Whitmore was “inadvertent” and the police car was slowing or stopping when this took place.

Mr Griffiths said he remembered PC Huskisson saying something “facetious” after hitting Mr Whitmore, but claimed it was said in the heat of the moment.

Giving evidence, PC Huskisson said he remembered being in tears after the collision, and said the idea put to him that he wanted to deliberately run someone over was “unbelievable”.

He said the cobbled surface of the taxi rank in St Andrews Street caused the police car’s anti-braking system to kick in – meaning he panicked and stopped the car later than he planned.

He denied claims that his comment was made to “show off to a less experienced colleague”, but he was instead trying to diffuse the situation.

He claimed PC Huskisson’s demeanour while speaking before the panel was “arrogant, argumentative, lacking in insight, and vicious” – and that he had shown no remorse.

Mr Holdcroft said the public’s confidence in the police service would be impacted by PC Huskisson’s behaviour.

However Colin Banham, representing PC Huskisson, said the officer was of good character and he had been “truthful from the outset” about a “harrowing incident”.

The misconduct panel ruled PC Huskisson’s actions amounted to gross misconduct in three different areas – the use of force; authority, respect and courtesy; and discreditable conduct.

Despite this, a tearful PC Huskisson was handed a final written warning and allowed to keep his job in the force.

This was despite a recommendation from Alan Baldwin, deputy chief constable of Cambridgeshire police, that immediate dismissal from the force was the “only appropriate outcome”.

In a statement, DCC Baldwin said: “It is clear to me the officer did have a range of alternative options he should, and could have, adopted in his attempts to detain a pedestrian, and questions he should have asked over the radio to establish the risk the suspect posed.

“The comment he made does not betray the high standards of care and concern for members of the public that the police force has. His behaviour and actions are utterly unacceptable.”

The panel heard that PC Huskisson’s father had died in July 2016 – leaving him and his mother with a significant amount of debt.

It was stated that if he lost job in the force, PC Huskisson would be unable to provide or care for his mum, who has severe health difficulties.

He said PC Huskisson had always wanted to be a police officer to follow in the footsteps of his grandfather – who was also awarded the Queen’s commendation for bravery.