"He uses it every day, not just to pray, but also to read and reflect" 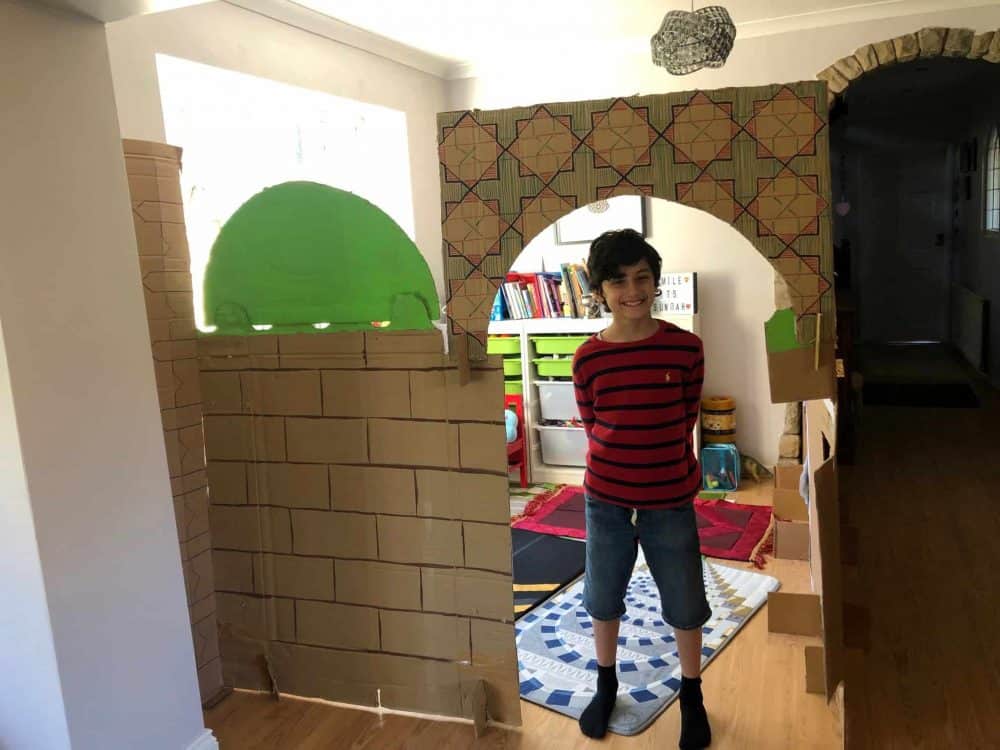 A schoolboy has responded to the closure of mosques during the lockdown by building his very own one out of cardboard at home so he can celebrate Ramadan.

It took the youngster, who is currently off school, a week to design and build. His mum, Auzma Yousaf, helped him with some of the more intricate Islamic geometric designs.

Yahya used sweet wrappers and paint to decorate the exterior before adding fairly lights and even a diffuser, which releases various scents, just like in a real mosque.

The schoolboy, who goes to Bradford Grammar School in West Yorkshire, also adds an inspirational word or phrase to the display, such as ‘be happy’ or ‘smile’, every day.

He said: “I decided that, because all the mosques were closed, that I might as well make my own.

“I wanted it to be a special area and a peaceful place in the house. It is magical and it makes me feel happy when I go in there.”

Yahya’s local mosque in Bradford is currently closed due to the coronavirus crisis, in line with national guidelines about any area where large groups may congregate.

Ramadan begun on April 23 and will end a month later on May 23.

Yahya’s mum, Auzma Yousaf, said: “We’re so proud of him for showing the patience and determination to get it finished.

“He uses it every day, not just to pray, but also to read and reflect. We spend time in there together as a family to pray and reflect.

“It’s not been easy for him not seeing his friends or cousins, so this project has given him a positive purpose in this lockdown period.

“It’s important to make the best of the situation that we’re in.”

Richard Ribeiro, headmaster at Bradford Grammar Junior School, has expressed the pride he feels for one of his most creative young students.

He said: “We’re really proud of Yahya for taking on such a challenge and showing real ingenuity in creating a happy, inspiring and safe place to be in his home.”

Bradford Grammar School is a co-educational independent school in Yorkshire, which was named by the Sunday Times as its Northern Independent School of the Year in 2018.