Heroic Albert Chambers has described himself as a "very lucky man" after successfully battling the virus which to date has claimed the lives of nearly 8,000 Britons 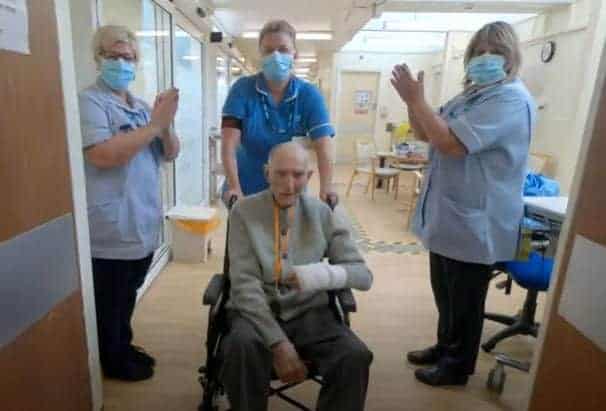 A 99-year-old man who was injured in the Second World War and survived three years as a prisoner of war has been discharged from hospital after defeating coronavirus.

Heroic Albert Chambers has described himself as a “very lucky man” after successfully battling the virus which to date has claimed the lives of nearly 8,000 Britons.

An emotional video shot on Friday shows the OAP being wheeled out of hospital as teary staff give him a guard of honour and a rapturous round of applause.

Albert, who turns 100 in July, said: “I had a fall at home around three weeks ago.

“My neighbour helped me and I soon found out I had broken my arm.

“When I get home I’m going to tell all of my neighbours how marvellous the nurses are here.

“I want to say ‘thank you very much’ to them. I appreciate every bit of what they have done for me.

“They couldn’t have been any better. I’ve been well kept and well looked after.”

Albert, who is from Doncaster, South Yorks., was treated at Tickhill Road Hospital, where coronavirus tests came back positive.

The die-hard Liverpool fan received oxygen to help him battle the virus.

According to his grandson, Stephen Gater, Albert was a Coldstream Guard with the British Army and at one time helped protect Buckingham Palace.

While serving during the Second World War he suffered a leg injury and spent some years in a POW camp.

Speaking about the war, the pensioner simply said: “I survived that.”

“He’s not only survived the war and being in prison camp, now he’s won the battle with Coronavirus.”

Paige Lax, a nurse who helped to care for Albert, said: “Albert has been a wonderful patient.

“He’s fought to get better… he wanted to get back home. He’s pretty amazing.”