A village sheep race which features ‘jockeys’ tied to their backs has been axed after protesters claimed it was ‘terrifying’ for the animals. The annual contest sees 50 sheep run around a 70m grass track with stuffed toy jockeys on their backs. But it was cancelled after more than 40,000 people signed a petition which […] 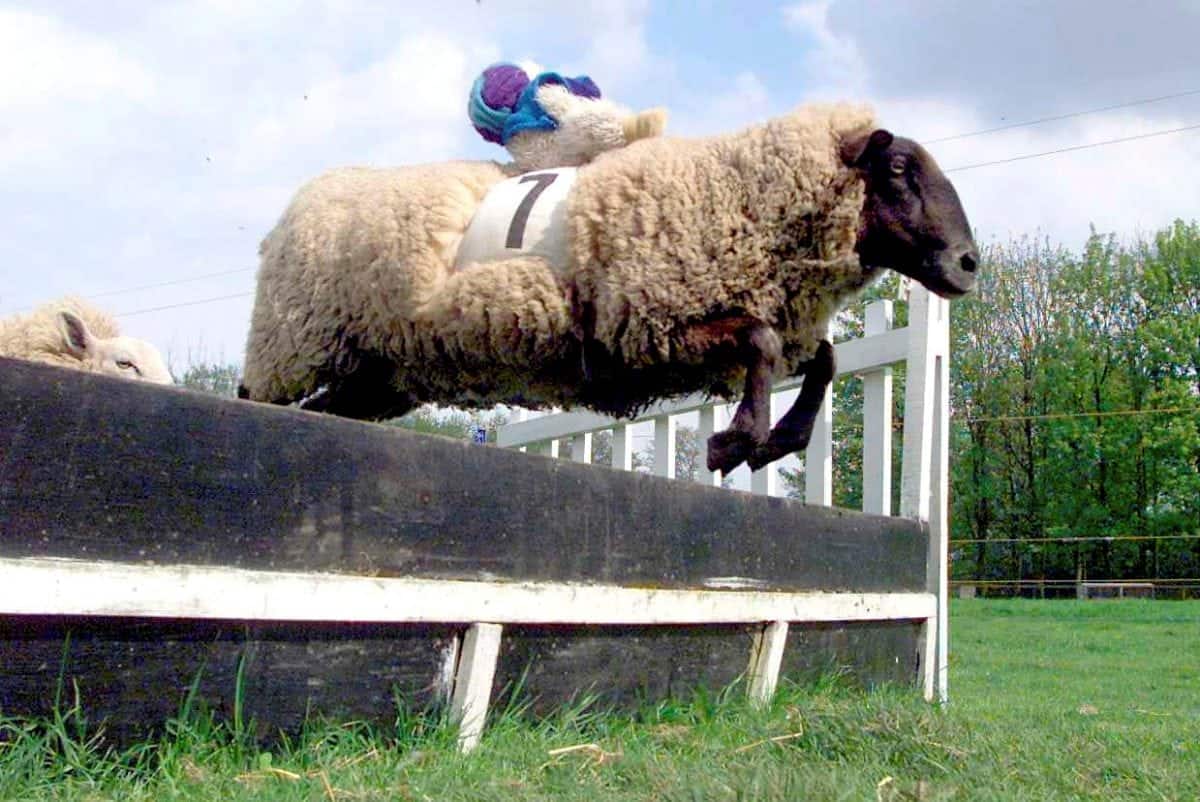 A village sheep race which features ‘jockeys’ tied to their backs has been axed after protesters claimed it was ‘terrifying’ for the animals.

The annual contest sees 50 sheep run around a 70m grass track with stuffed toy jockeys on their backs.

But it was cancelled after more than 40,000 people signed a petition which calls for the tradition to be scrapped over concerns for the sheep’s welfare.

The fete in Woodditton, Cambs., was due to place on July 9 but has now been cancelled.

She said: “I was out last week and I saw this banner advertising the event which has a picture of the sheep racing on it.

“I was quite frankly horrified. I thought we had left using animals for entertainment in the dark ages.

“It’s unacceptable to treat animals in this way and even worse that it is at a family event as it gives children the wrong impression.

“When sheep run they are scared and on top of that they have to deal with large crowds clapping and cheering. It’s a terrifying ordeal for them.

“It’s completely demeaning and humiliating for the animals.”

After seeing the advert on Saturday night, Samantha posted the petition online the following day.

Calling for supporters, she wrote: “On 9 July sheep, who are timid, nervous and easily frightened, will be made to race and jump along a race course, in the heat, with a teddy bear tied to their back, while a noisy crowd shout and cheer.

“This must be terrifying for them.

But within hours, the number of people signing the petition rocketed, and in just four days she reached 38,000 signatures.

More than 40,000 people have now backed Samantha – who is delighted to have learned the race has been cancelled.

She said: “I was planning on presenting the petition to the vicar of the church where the event is due to take place on Sunday.

“But it’s all taken off so quickly that the organisers got wind of it before I had a chance to do that.

“I was jumping for joy when I heard the event had been cancelled, it’s wonderful to think I’ve made a difference.

“To stop an animal having to endure suffering is wonderful and the support I have had is fantastic.

“I hope it will encourage organisers of other events to consider whether it’s right using animals in this way.”

Woodditton Parish Council agreed to cancel the race as it was “conscious of the need to treat animals with care”.

In a statement, a parish council spokesman said that in previous fetes “the races were organised and managed superbly and without incident by the professional shepherds”.

He added: “The sheep used were mature ewes, not in lamb, and did not carry ‘jockeys’ of course.

“The races were straight, with proper barriers and no hazards for the sheep.”

“We wouldn’t be involved in anything we remotely regarded as cruel.

“But clearly some people do have other views, which we understand.”