"There is no excuse for these actions that can have a lasting negative impact on dolphins and other wildlife." 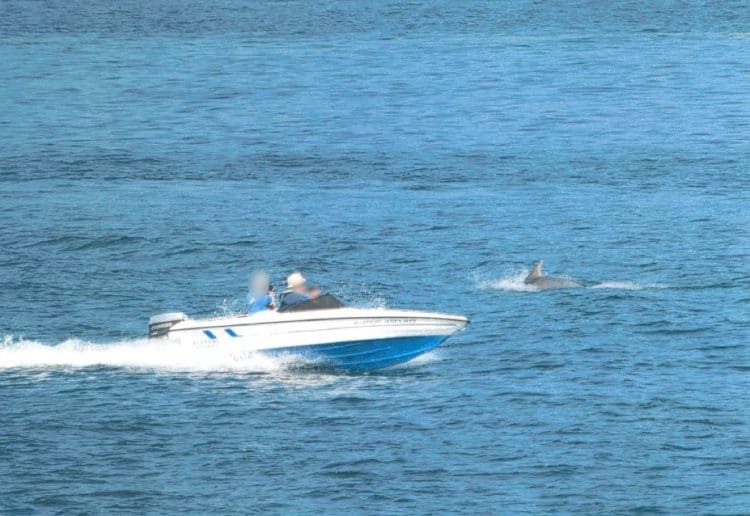 A speedboat owner who ‘corralled’ a pod of dolphins has been convicted in the first prosecution under a national clampdown on marine wildlife disturbances.

Witnesses saw Christopher Barker, 45, intentionally circling the cetaceans off the coast of Scarborough, North Yorks., at excessive speed, causing the animals to split up.

One witness described Barker’s actions as ‘corralling’ and on-lookers were left shocked and distressed, police said.

Barker, from Brompton-by-Sawdon, North Yorks,, was charged with intentionally or recklessly disturbing a dolphin under the Wildlife and Countryside Act 1981.

He pleaded guilty and was fined £200 in what police said was the first case to come as a result of the national effort to protect wildlife at sea.

In his defence, he said he had only owned the boat for a month and was unaware of dolphin’s protected status.

District Judge Adrian Lower said it was the first case of its kind heard by the court and he was sure the Barker had no idea his actions would “amount to a criminal offence”.

But North Yorkshire Police said dolphin sightings off the coast had increased in recent years, which had lead to a spike in human interference.

The force said it was committed to protecting the region’s ‘diverse’ wildlife and urged boat owners to respect marine animals.

“Over recent years sightings of dolphins off the Yorkshire coast have increased dramatically, proving popular with locals and tourists alike.

“But this has also led to an increased risk of human interference.”

“I urge all boat and watercraft operators to act responsibly and respect the marine environment.

“We are extremely lucky in North Yorkshire to have such diverse wildlife.

“It’s important that we enjoy, protect and live alongside it.

“North Yorkshire Police is committed to investigating offences which have a detrimental effect on our wildlife, and I hope that this prosecution underlines that message.”

Geoff Edmond of the RSPCA said: “This was clearly unacceptable behaviour, and combined determination to investigate the dolphin disturbance in this case has been achieved with the help from the members of the public who witnessed this incident and who were themselves very concerned about what they saw taking place.”

Prosecutor Rebecca Dunford said: “This is believed to be the first prosecution as a result of the national effort to protect wildlife at sea.

“There is a cost to interacting with creatures in the wild and this result shows how committed we are to prosecuting this type of crime and protecting our wildlife.

“There is no excuse for these actions that can have a lasting negative impact on dolphins and other wildlife – and we will not hesitate to prosecute where our legal tests are met.”

Related: Meet the UK’s super dogs… including a mastiff and Staffordshire bull terrier cross which alerted its owner to cancer