It also emerged 82 per cent credit their dog for having a positive impact on their mental health, with their pooch making them smile five times a day. 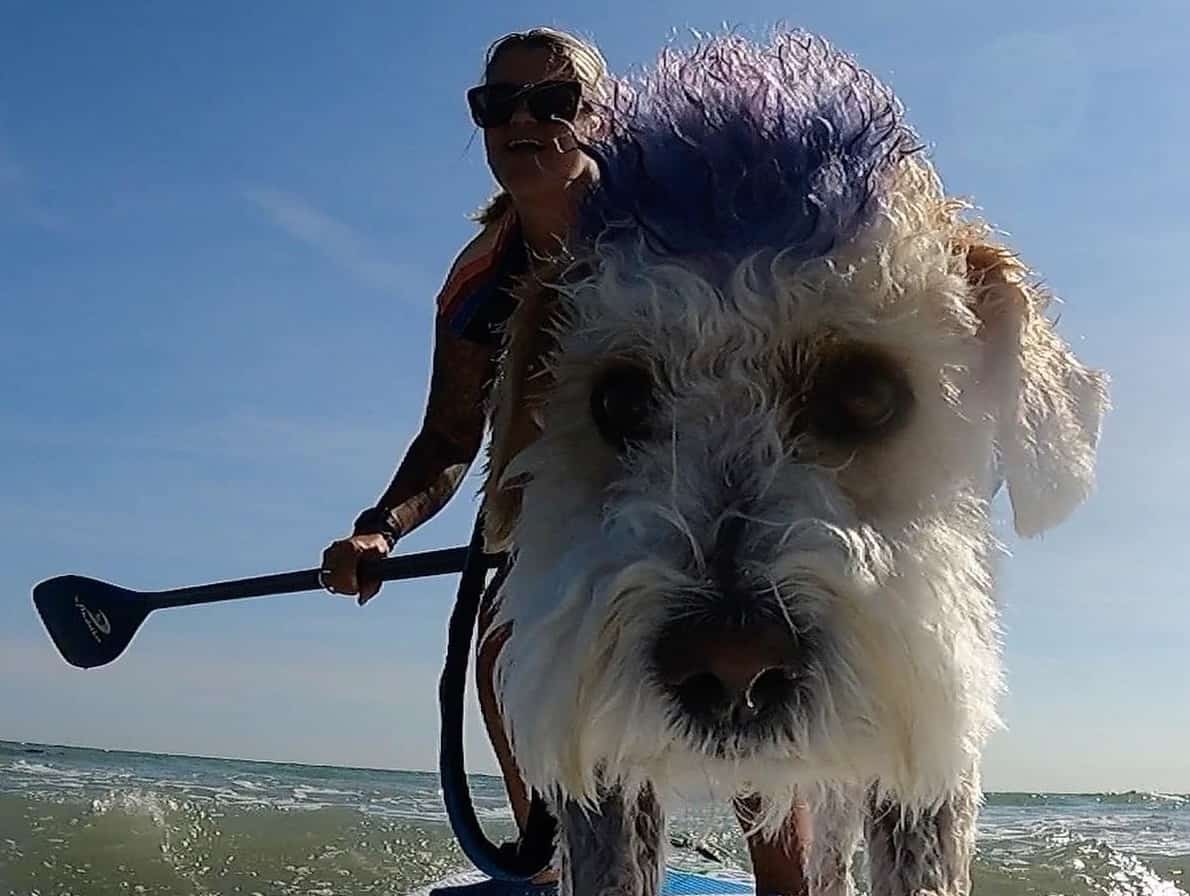 These dogs have all got an extraordinary talent, with one pup able to surf while also helping their owner with PTSD at the same time.

And a Yorkshire Terrier which ‘sniffed out’ their owner’s sepsis.

The dogs were brought together by vitamin brand SuperDog from Vitabiotics to celebrate some of the country’s most talented pooches and the relationships they have with their owners.

Rescue dog Louie alerted owner Karen Ethier to a lump which turned out to be aggressive breast cancer.

The pooch, who had a leg amputated due to neglect from a previous owner, kept ‘headbutting and nuzzling’ Karen’s chest.

She was later diagnosed with stage three triple breast cancer, and underwent intense chemotherapy, radiotherapy, and surgery – which caused hair loss and painful side effects like blistering skin and nerve damage.

Karen, from Cirencester, Gloucestershire, said: “I couldn’t believe it when I found a lump – Louie was trying to warn me the whole time.

“Louie is incredibly loyal and he knew when I was feeling down or sick from treatment.”

While Chico, a 13-year-old Yorkshire terrier, saved his owner’s life by ‘smelling’ the sepsis she developed from third degree burns after a bad reaction to hair dye.

Levi Carter, 23, visited a hair salon to go from brunette to blonde, but after the peroxide bleach was applied, she claims her scalp started to burn and it was ‘smoking’ – before the stylist quickly washed it off.

She was treated for third-degree burns, but after returning home from hospital, the pooch wouldn’t leave her alone and refused to settle, sniffing around the wounds on her head.

Levi, from Lincolnshire, said: “I only went back into the hospital because my dog wouldn’t leave me alone – he must have smelt the infection.

“If I left it any longer then who knows what would have happened – I might not be here. Chico saved my life.”

Another extraordinary dog is seven-year-old Scooter, a Poodle mix with a blue Mohican who can surf.

The rescue dog was trained to visit stroke patients and people receiving end of life care, but with no space for him at the pound, staff were faced with putting him down.

But Kirstie Coy-Martin, 48, a Met Police officer struggling with PTSD after years on horrific child abuse cases, decided to adopt him.

The keen surfer, from Bracklesham Bay, in West Sussex, discovered pets can be trained as surf therapy dogs to support war veterans, so worked with Scooter to get him used to the board with treats and cuddles, before progressing to dog paddling pools and shallow water.

She said: “We get stopped quite a lot for photos. That’s what he’s there for, to make people smile.

“Being in the water is my happy and safe space and it’s scientifically proven that surf therapy can help people with PTSD and other mental health issues.”

The inspirational stories come after a study of 2,000 dog owners commissioned by SuperDog from Vitabiotics found 71 per cent consider their pet to be a hero.

A third claim their dog has a special talent while 37 per cent think they have done something extraordinary.

It also emerged 82 per cent credit their dog for having a positive impact on their mental health, with their pooch making them smile five times a day.

And 73 per cent of those polled via OnePoll would be lost without their dog.

A spokesperson for SuperDog from Vitabiotics said: “Dogs have long been considered to be ‘man’s best friend’, but this really reiterates the point that a dog owner’s life is more often than not better with their pet in it.

“Whether a dog is saving your life or simply providing you with companionship and comfort, they are an integral part of the family who we want to keep as fit, healthy and happy as possible.

“We want to celebrate some of our talented pets and are inviting owners to submit their dog’s stories at for a chance to win prizes.”