A senior clergyman who took nearly 600 images of men in public toilets on his phone was spared jail. The Very Reverend Martin Thrower, 56, was given four months in jail suspended for two years after being caught filming a teenage boy in a shopping centre toilet. Police found the married priest’s photos on his […] 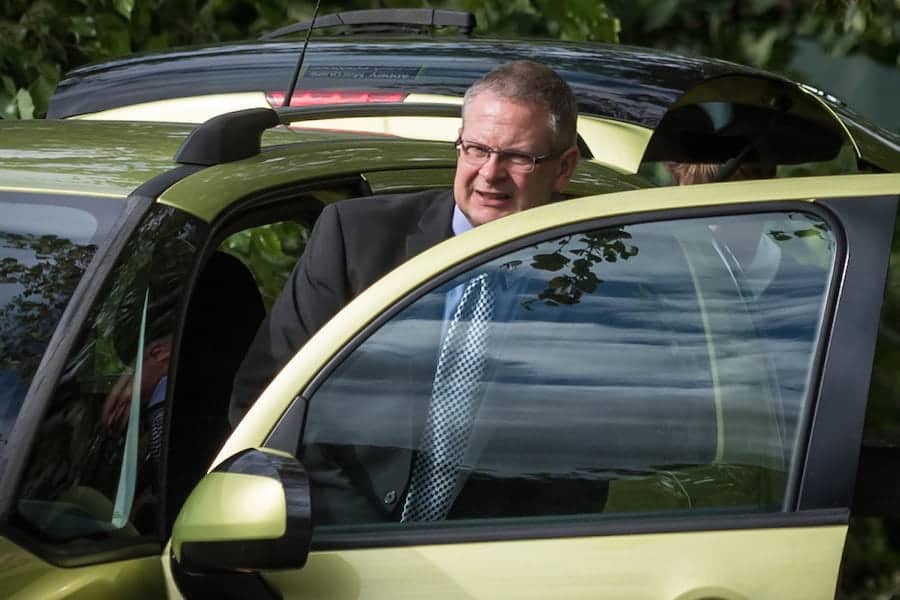 A senior clergyman who took nearly 600 images of men in public toilets on his phone was spared jail.

The Very Reverend Martin Thrower, 56, was given four months in jail suspended for two years after being caught filming a teenage boy in a shopping centre toilet.

Police found the married priest’s photos on his phone but he denied having a sexual fetish with men in toilets.

The grey-haired rector of the village of Hadleigh with Layham and Shelley in Suffolk claimed he went to public toilets to play solitaire.

Thrower initially pleaded not guilty to two counts of voyeurism but changed his pleas to guilty on the first day of his trial at Norwich Crown Court.

Sentencing him yesterday (thu), Judge Katharine Moore said: “I do not accept that your actions here were anything other than an exercise of your free choice, repeated time and again whenever you thought you could get away with it in public lavatories.

“I would seem to me that there has been throughout and perhaps still is, a tendency to seem to attribute this persistent behaviour over a two year period to a break down to your mental health and well being – I accept without reservation that you were working extremely hard.”

The judge said he had a “medium” risk of reoffending and made an order that he undertake 30 days of rehabiliation and attend a course to address his sexual offending for up to 60 days.

Thrower was caught filming the young man in the cubicle next to him at the toilets in the Buttermarket Shopping Centre on August 4 last year.

He was arrested after the shocked victim reached up and grabbed the phone and moved one cubicle along.

Thrower, from Hadleigh, Suffolk, claimed he was not sexually aroused after police discovered 589 photos of men taken from above and below cubicle walls at a number of public toilets on his phone.

Prosecutor William Carter, telling of the trial, said: “[The victim] finished his evidence at about a quarter to three on the afternoon of that first day, there was then quite a long break while Mr Nelson spoke to his client and then at twenty to three that afternoon your honour was invited that he be re-arraigned where upon he entered guilty pleas.

“He gave a victim impact statement which said, ‘I felt totally shocked by this person’s behaviour and whilst explaining it to the security office and street ranger I started shaking to the point I felt physically sick’.”

“He noticed at about 4pm that afternoon that there was a hand over the partition between the cubicle in the toilet he was and the next one.

“It was holding a mobile phone, he grabbed the phone, immediately exited the cubicle, challenged Mr Thrower as to what he was doing.

“That in fact was all caught on the phone because it kept filming. Security were called, then the police and he was arrested.

“It became perfectly apparent that this wasn’t the first time, he said that he had been doing it for about two years.

“When the officers looked at the phone they found that in fact three men had been filmed that day in the public lavatories only one of whom was [the victim], two remain unknown.

“He said he had this, as he put it, this weird kind of desire to see who was in the toilet next to him and that was the reason why he filmed the men.”

The court heard police found 589 images on Thrower’s phone which included 50 taken from above cubicle partitions, six videos, and 17 images which showed men’s genitals or buttocks.

Four images were found on his Apple iMac at his home which the prosecutor said “showed professionally made pornography all of which had as its theme men going to the lavatory – the Crown’s point being that that completely, and in fact, the Crown would say, utterly destroyed the defence being put forward that there was no sexual motive in these.”

Mr Carter, when he opened the trial in June, had said: “He said he had a stressful couple of years and found that being in lavatory cubicles helped him.

“He said it was somewhere he could go for a bit of peace and quiet, and somewhere where he would not be troubled with matters of work.

“He said he would play solitaire on the phone and the interest would start as to who was sitting in the next door cubicle and matters went from there.”

The Very Rev Thrower, who appeared in court wearing a dark suit and tie, had been a rector of Hadleigh with Layham and Shelley since 2009.

Stephen Nelson, defending, said his client was answering a “need test his sexuality” and added his conduct in the church had been “exemplary”.

He told the court at least eight men were filmed in public toilets by Thrower before he was arrested and added: “The matter is not black and white. It’s clear that in the two years leading up to his arrest, which is a now a year ago tomorrow, that he had been under considerable stress and pressure on a increasing basis, working a substantial number of hours during the day and working in a manner which involved him dealing with people in traumatic circumstances.

“It was quite clear that in whatever manner it was, his health had suffered to the point that he felt he needed isolation and then for want of a better word, some form of experimentation.”

The vicar had been suspended from his post and is facing disciplinary action from the Church of England.