W/ The Moonlandingz, Jane Weaver Brixton Academy, London 29.7.17 For the uninitiated, Gothenburg’s Goat are known for generating a psychedlic feast in their live shows, but tonight’s performance looks more difficult to predict than most with such a rich and varied line-up – particularly with an appearance from The Moonlandingz scheduled in the middle of […] 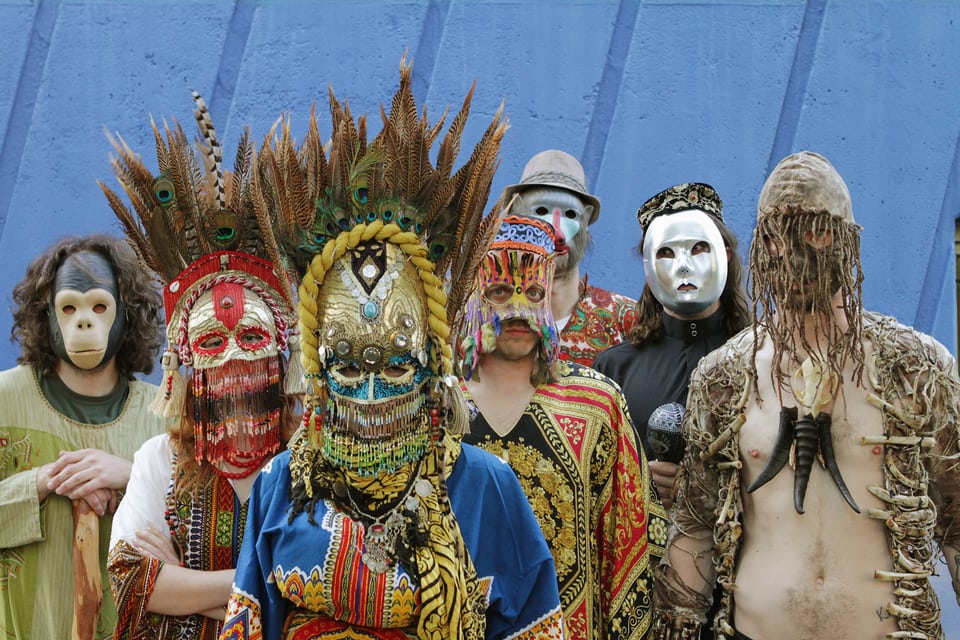 
For the uninitiated, Gothenburg’s Goat are known for generating a psychedlic feast in their live shows, but tonight’s performance looks more difficult to predict than most with such a rich and varied line-up – particularly with an appearance from The Moonlandingz scheduled in the middle of it.

Brixton Academy is the perfect setting for the night, with its sloped floor and surrounding bars providing a festival-like atmosphere. Jane Weaver takes to the stage first, with an enchanting synth-led journey through her stunning debut, Modern Kosmology. Single ‘Slow Motion’ and ‘Don’t Take My Soul’ stand out in the set as particularly effective examples of her engrossing brand of spacey disco.

We knew it was coming, but The Moonlandingz really run away with the night. At times, it’s more a question of what the audience is witnessing than who. Frontman Johnny Rocket – AKA Fat White Family’s Lias Saoudi – bursts onto the stage, hair coated in camembert, and leads a frenetic and frankly bizarre set from the semi-fictional band’s debut album. The eccentric bunch storm though ludicrous hits including ‘Sweet Saturn Mine’, ‘Black Hanz’ and ‘Neuf du Pape’, at one point sampling Gary Glitter’s ‘Do You Wanna Touch Me?’ to memorable affect.

Lesser bands could be intimidated by The Moonlandingz intensity, but their insane spectacle is followed by Goat’s enigmatic, irrepressible Swedish psychedelia. The two front women emerge in metallic tribal costumes and masks before hurling themselves across the stage in an almost ritualistic dance. Their dark cosmic rock and groove is engineered to blow minds in a high-octane 90 minute journey. Drawing from all three of their albums, ‘Run To Your Mama’ and ‘Talk to God’, which ended the main set, drew huge cheers from the crowd.

And while Goat veer into self-indulgent territory at times, the mysterious shamans keep the crowd dancing for the entire set. A tough one to call, then; an incredible night of music in Brixton, which saw The Moonlandingz just about nab the glory from tonight’s headliners – but what a contest to witness.